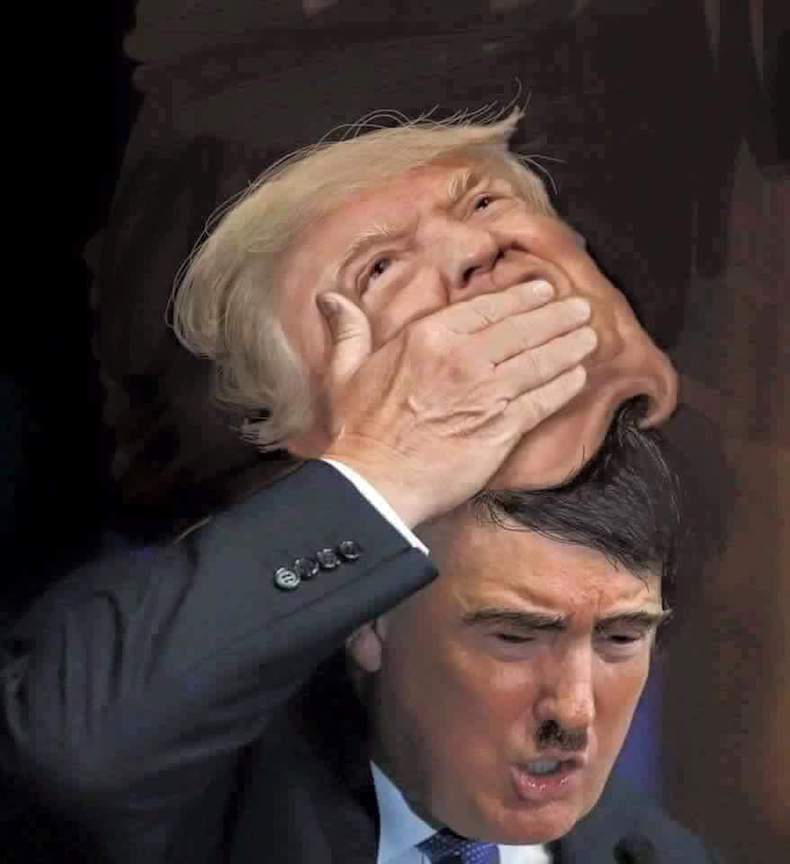 This inauguration feels like the coming of the Dark Lord with his Twitter whip and brawny goon squad of online trolls who snarl and attack anyone who dares to criticize the leader of the pack, who is now our 45th president. All hail to the Conman-in- Chief.

Trump has the lowest approval ratings for an incoming president ever recorded (40% and dropping fast). He sank from relatively low numbers post- election (55%) to lower numbers as he squandered the post-election honeymoon most incoming presidents enjoy by carrying on in his usual vengeful and chaotic way, dissing NATO, reaffirming his bromance with Putin (what does Putin have on him, anyhow?), assaulting John Lewis on Twitter after Lewis questioned the legitimacy of his presidency, echoing the thoughts of millions of Americans and people around the world. Even now the intelligence community is investigating communications between Trump’s campaign team and Russia that took place in the run up to the election. He is packing the cabinet with people who are ready to dismantle the agencies they are supposed to run.

So how can we survive the reign of Trump? If you take a look at David Brook’s Op Ed in the New York Times today you can see the beginning of an idea that I have been thinking about too and probably many other people. Trump is such a chaotic and scary leader and he tweets so many offensive and outrageous things that it is possible our divided country might, over time, come together to defend against a common enemy, namely, Trump himself. Could he be the very thing our bitterly divided nation needs to come together? Rise up against Trump, the common enemy of the people?

You might think this is farfetched but if he demolishes ACA or lets the Republicans get away with that; if he blunders on the world stage and brings us all closer to the apocalypse; if he tries to destroy public education, environmental protections, Medicare and Medicaid and other safety nets and social supports: if he tries to turn back the hands of time on social progress, same sex marriage, Roe v Wade, Planned Parenthood…the list is long, he will meet with resistance. He already is and he just took office today.

Marches across the country that will take place tomorrow to protest what Trump stands for are the beginning of a movement that feels to me like the anti- war movement of the 60’s. This movement today, however, is one that is about preserving a culture of progress and a culture that supports a true democracy where we care about and look out for each other. Unlike many other uprisings the rabble that is aroused this time are people of all colors and widely ranging economic backgrounds, many who are well educated, professional, have money, power, are savvy and articulate and believe in a vision of progress, open minded tolerance, and support for people who need help.

Hindsight is a great teacher. Looking back at this election it has become clear that the people in the heartland of our country voted for change and a strong man because they feared globalization. They put their trust in a very flawed man who told them what they wanted to hear. But if Trump carries on as he has done so far and fails to make that presidential pivot we have all been waiting for, he many well become the cause Americans will unify around to reject and defy. Buyer’s remorse is a real thing and most presidents experience it after the initial honeymoon. Buyer’s remorse also takes some time, but given the scariness and messiness and sheer vengefulness we have already seen from Trump, even Trump’s devoted heartland Americans may experience buyer’s remorse sooner rather than later. We are already seeing those plummeting approval ratings. How low will they go? Stay tuned.

So how will YOU survive the coming of the Dark Lord? Try a diet of steady resistance with a chaser of humor. Humor helps a lot. Oppressed people around the world and throughout history have spoken truth to power using humor. In fact, tonight the Tenth Dems are getting together to enjoy Capitol Steps at the Center for Performing Arts in Skokie. Look on the bright side- comedians will have an endless supply of material in the coming four years. And we are going to need it.