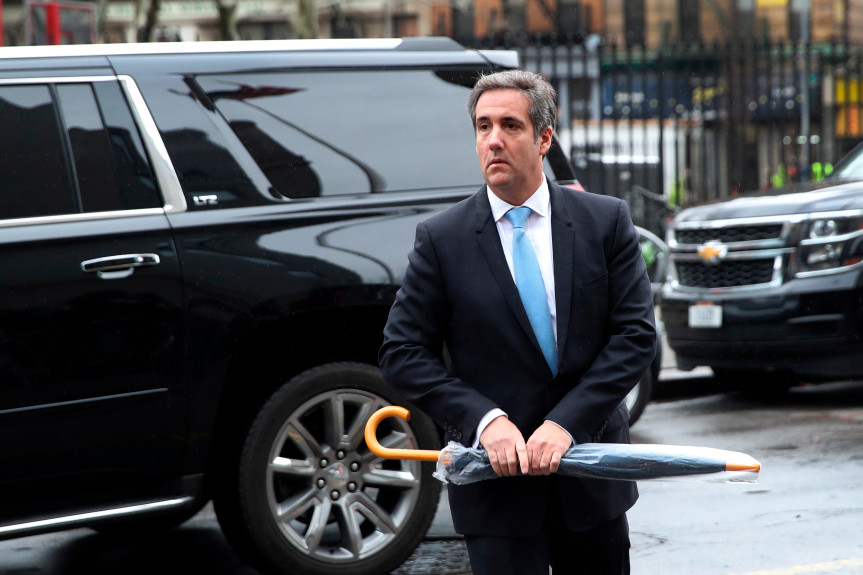 What do we learn from today’s headline in the National Enquirer, a tabloid paper totally in bed with Donald Trump? (If they print a headline like this, they have checked it with Trump first.) We learn that Trump and his goon squad have figured out that Michael Cohen is going to flip and turn state’s evidence to save himself from going to prison for a long long time. And we see Trump’s defense to that which will be to blame Cohen for everything and claim that Trump hardly knows the guy. We already saw this defense coming because Trump threw Michael Cohen under the bus when he called Fox and Friends and had his manic 31 minute rant on air.

Especially if we learn, as Michael Avenatti is subtly suggesting here and there on a variety of cable news shows, that there may have been a shocking pay off to a former Playboy bunny to get her to have an abortion because Trump got her pregnant. Remember that 1.6 million dollar pay off that was ostensibly arranged by Michael Cohen to be paid by a guy named Elliott Broidy, a wealthy venture capitalist, Republican fundraiser, Trump supporter and the former RNC deputy finance chair? He paid the money to a former Playmate who got pregnant and had an abortion. Remember that? Broidy lost his position with the RNC over that. But what if that was not Broidy’s misadventure? What if Broidy was taking the hit for Trump on that pay off and subsequent abortion?

What if Trump paid a woman to induce her to get an abortion? Now we begin to understand why Trump is so worried and upset. We get it why he is assaulting Cohen to try to break down his credibility. We understand his need to call Fox and Friends with an agenda to distance himself from Cohen and claim that the feds are looking at Cohen’s misdeeds which have nothing to do with him. Only we also know that is another Trump disinformation campaign. It will be interesting to see Evangelicals twist themselves into knots defending Trump if and when it comes out that Trump paid off this woman to induce her to get an abortion.

This is just the beginning of the dog fight. The shit is going to hit the fan for this administration. I just hope it comes before the midterms so that more people in this country understand what they are voting for. We need a check on this president and his administration of enablers. The corruption and sleaze are overwhelming. We are drowning in this garbage. Lie down with the flea ridden dog and guess what? you get a lot of fleas.