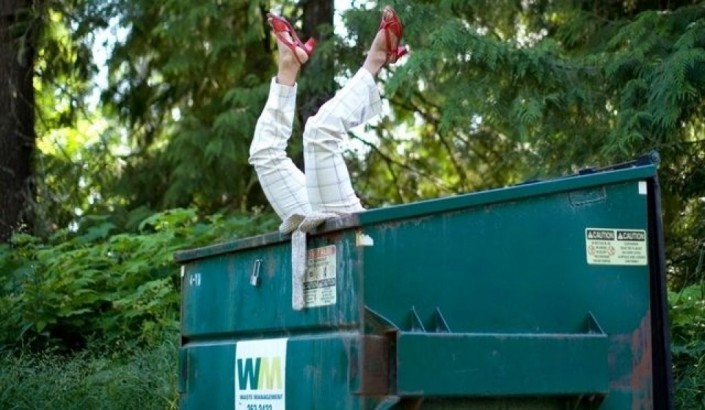 There is so much bad news it’s as if we have a massive dumpster filled with garbage and we get more stinkin’ garbage every day- the dumpster runneth over.

We have the largest national debt ever, the largest spending bill ever.  Wages are at a stand-still.  Inflation is right around the corner. Trump is slapping even more tariffs on China and now, Turkey.  Despite tariffs ruining their profits, a lot of farmers continue their bromance dance to the death with Trump.

Trump is Twitter-hounding the NFL players to stop kneeling or else, like the Queen in Alice in Wonderland- “Off with their heads!”

Judge Ellis has taken to bullying the prosecutors but not the defense team in the Manafort trial: picking on the lead prosecutor for crying. “Are you crying?” when he was not crying; telling him to stop looking down; taking him to task for allowing a witness to be in the courtroom after giving testimony and commenting on an evidentiary matter that could improperly influence the jury.  Judges have the power to tell lawyers to stop badgering witnesses.  Who is going to tell this judge to stop badgering the prosecutors?

Chris Collins (R-NY), Trump’s first supporter in Congress was engaging in insider trading on the White House lawn, overheard by just about anyone within earshot because corruption is par for the course in this administration and no one seems to care.

This weekend we get another white supremacist rally in Washington, D.C. instead of Charlottesville to celebrate the one-year anniversary of that first god awful rally with Tiki torches and the death of a young woman.  Laura Ingraham speaks out with frankly racist trash talk and then pretends she didn’t.

Trump’s babyish need to have something he calls a Space Force is being treated by Washington as if it is a great idea, an actual thing that will be funded with 8 billion dollars that could have been spent on infrastructure, education, social justice and so much more we really need.

Russian bots are trolling social media like SS troops for Das Furor.  There are angry Twitter battles going on within social media pipelines.  You can witness them if you go down the Twitter rabbit hole, which I urge you not to do if you want to preserve your peace of mind.  They usually erupt over something posted by CNN or a Tweet that is even slightly anti-Trump.   Trump supporters (or maybe they ARE Russian bots), make some nasty comment laced with street talk to rile up Americans with opposing viewpoints. Then the responders get mad and they post and they tell each other not to get mad because the comment was probably just a Russian bot anyhow.

And don’t get me started on Brett Kavanaugh.  He is even worse than we thought because he wants Trump to be a king instead of a president, and it looks like he helped craft the torture policy of the Bush administration when he worked there, so of course, Republicans are trying to hide all that from us.

Oh, and there are wildfires raging in California because some people were stupid enough not to believe in global warming .

There is so much bad news it’s like we are being punched in the gut every day.  We are living in our own version of Tom Brown’s School Days stuck in the part of the story where the bully keeps punching out Tom day after day relentlessly, stealing his books and kicking him in the butt.

Some people have turned off the news.  They are tired of feeling angry and helpless, tired of the gut punches.  Some listen to podcasts because they can keep control of their listening experience.  That way, if they get too upset, they just turn it off.

Not everyone is able to turn it off.  I can’t.  I cannot stop watching the news and reading the news.  I am like a whale sucking in krill.  I am like a bloodhound on the hunt.  I am a dumpster diver in the age of Trump.

As long as Trump is our president and we have a Republican run Congress, a smarmy bunch of pirates pretending to be upright citizens, we are going to get a lot of garbage.  Dumpster diving for the good news might seem like a fool’s errand, but there is good news mixed in with the putrid mess we are getting with Trump and the Republicans.

So here are a few tidbits of good news from the past few days I dug out of the trash bin just for you.

A federal judge ordered the United States government to bring back the woman and child whose immigration status was being litigated by the ACLU in his courtroom, when the government surreptitiously whisked mother and daughter away from the detention center where they were waiting for the results of their hearing, putting them on a plane to El Salvador.  The judge threatened Sessions and Nielsen with contempt of court.  Sweet.  And the mother and daughter are now back to the United States.  Let’s hope they can stay and live the lives they hoped for in America.

The American Psychological Association, at their recent meeting in San Francisco, fearing a Trump administration return to the use of torture, voted to keep the ban against torture at Guantanamo where terrorists are housed.

The number of women running for office is breaking all records.  There are 182 women running for the House, 11 have been nominated for Governor.  There are 90 Muslim American candidates, and over 400 LGBTQ candidates, indicating a “rainbow wave” that is coming to sweep out the old boy network if we rise up to support them.  We have some outstanding Democratic candidates  running for office.  If they get control of the House they will definitely put a check on this administration.  Some Republicans behind closed doors are hoping for this to happen so they don’t have to be the sheriff imposing rules on this out of control president and his enablers. (Not that they are even close to doing that!)

Democratic candidates for the House are not for one minute being distracted from their messages.  They are talking about the economic and health care needs of their districts not about Trump or Nancy Pelosi or some other shiny objects tossed out there by Trump and his minions.

The so-called “right to work” gambit by the right wing to beat down union membership in Missouri was soundly beaten back on Tuesday with a 2 to 1 margin.  Unions win one after losing in the Supreme Court.

The Manafort trial is going in reasonably well.  The judge DID apologize for getting it wrong and chastising the prosecutors about allowing a government witness to be able to sit in the courtroom after his testimony had been taken.  The judge did the right thing by apologizing because he, the judge, had allowed the agent to sit in, and then forgot he made that determination.  We all have memory issues as we age.  Now how about apologizing for badgering the prosecutors in front of the jury?

As the evidence comes in, we are learning that Paul Manafort promised a Chicago banker a high-level job in the Trump administration in exchange for giving him a big fat multi-million-dollar loan that nearly wiped out the bank’s assets it was so big.  The loan went through.  The job of Secretary of the Army did not.  But we now know that Manafort, who was flat broke when he joined the Trump campaign, was using his position as campaign manager to engage in corrupt dealing as a way to make money after losing his multi-million-dollar job with the Russians in Ukraine.  The case is strong against Manafort.  And that means that the Mueller probe is getting closer to Trump.  Trump picked a grifter to be his campaign manager.  He either looked the other way, or he consciously chose him, but given Trump’s need to know and control everything, he most certainly knew and approved of Manafort’s sleazy behavior.

And even though Rep Chris Collins was openly violating the insider trading laws on the lawn of the White House, he DID get arrested by the FBI and now faces prison time or stiff penalties for his violation.  Breaking news: Collins just suspended his re-election campaign.

Our judicial system is still plugging along at a snail’s pace in a Trumpian world chock full of trashy, corrupt people, garbage policies and criminal behavior.  Our country needs a major house cleaning.  And it’s up to you and me to work to make that happen by voting in strong, ethical Congressional leaders in the midterms.  Right now the Dems have a 70% chance of taking the House but we cannot be complacent.   We can and must do this.

Signing off from the dumpster.