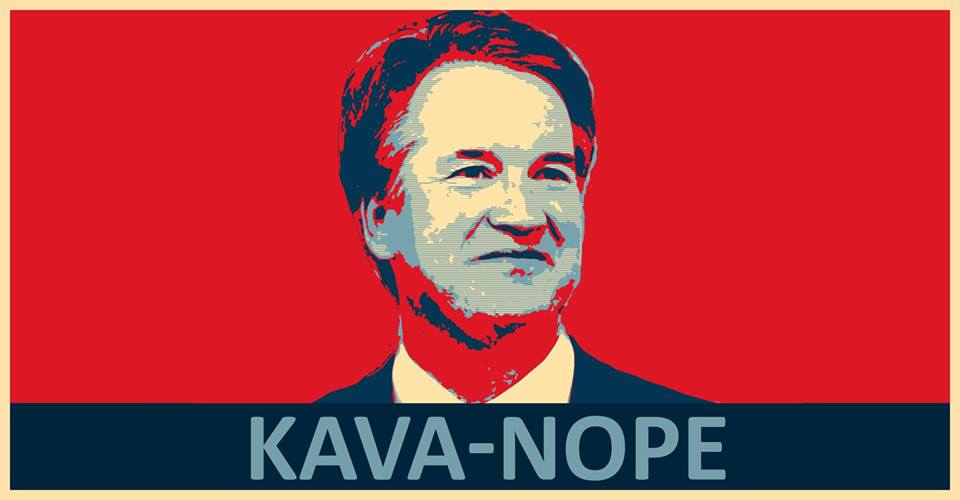 Here is the short answer: NO!  And we need to stop talking about it because this outrage about him, which is totally legitimate, is powering a right-wing Republican surge and hurting our chances to get a majority in the Senate.

I hate saying that because Kavanaugh is, as you know, a right wing political operative who was always going to be muscled onto the Supreme Court from the moment Trump realized that Kavanaugh was his dream come true- a guy who would overturn Roe, but also do so much more – protect the wealthy and the corporate interests, and protect him, Trump, from the Mueller investigation and other investigations that are coming for him.

This is not to say that the Kavanaugh fight is totally over.  It is not.  Ethics complaints against him arising from the confirmation hearing are being investigated by the Denver based 10th Circuit after being passed like a hot potato from Chief Justice Roberts to Merrick Garland and beyond.  It is not certain that that investigation will have any teeth.  We will have to see.  But once Kavanaugh gets on the Supreme Court, it is next to impossible to get him off.  Impeachment is a pipe dream because of the 2/3 vote required in the Senate.  Trying to get him disbarred will not keep him from being a Supreme Court justice.  There is no requirement that Supreme Court Justices be members of a bar or even be lawyers for that matter. A Justice can only be removed by impeachment, resignation, or death. It would be embarrassing, but it would not keep him from being on the Supreme Court.

Kavanaugh’s confirmation was a travesty.  It will severely damage the Supreme Court’s image as a fair and impartial body of judicial temperance.  But now is not the time to scream about it.  WE have to be temperate.

Timing is everything.  The mid-terms are only 26 days away and we really want the whole Kavanaugh issue to fade off the radar screen with Trump’s base.  We want them to sit home on their couches watching TV and eating Cheetos on Election Day.

Senate races have tightened up because Trump can use Kavanaugh as rallying cry to rev up not only the deplorables but many Republicans in the suburbs who wanted Kavanaugh to get on the Supreme Court with all their hearts because he will protect big money interests.

Heidi Heitkamp’s race got a lot tighter because she said no to Kavanaugh.  She may lose now, where she had a real chance before.  Suburban Republicans who were wavering about voting for Trump’s hijacked party are happy that Trump got them what they wanted.

What can we do?  What is the way forward?  We need to make those calls and write postcards to voters and knock on doors.  If you can do it, support the excellent candidates for House and Senate who need our support.  The easiest way to do this at this point is to trust groups like Emily’s List and the DCCC and DLCC.  They will know where to inject the funds for the candidates that need the most help.

When you add up all the Democrats and the Independents that combined group makes up about 72% of the electorate.  That is the group that disapproves of Trump.  Most of them are sick of his tweeting and his hate speech.  Most are convinced he has not helped the little guy as he said he would.  Most know he is reckless, impulsive, self-centered and uninformed.  They are convinced about these things to varying degrees and some are more motivated than others to vote for Democrats.  Many do not realize that not voting will mean we keep the status quo.

We can make the difference.  Dems and Independents need to vote.  Millennials too.  If we can get these voters to show up for this midterm election, we will win back the House and, hopefully, keep the Senate about even or, if Trump does another dumb thing in the next few days or weeks, win the Senate.  In 2020 the map gets better for Dems to take the majority in the Senate.  If we can get the presidency in 2020 we will be able to move the country in the right direction.  The House in 2018 is our first step towards taking back our democracy.  Let’s do this thing!