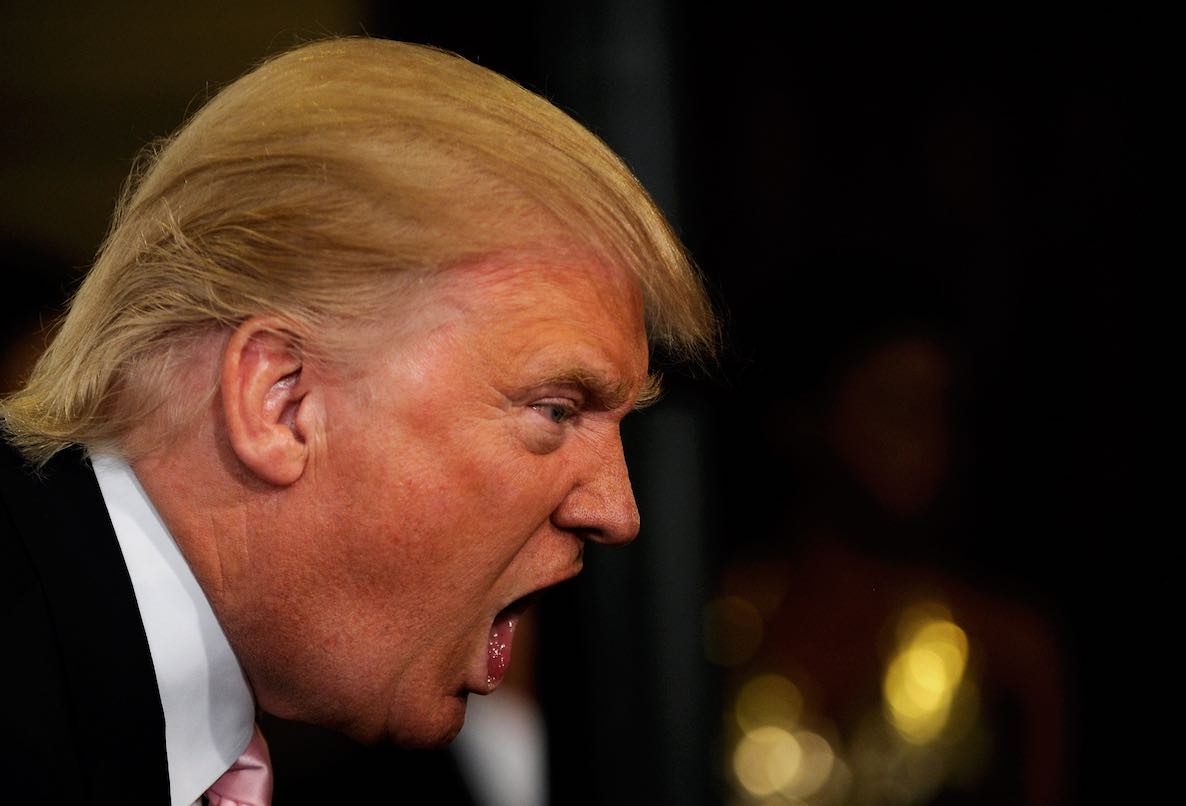 Watching Trump give his presidential speech on Tuesday night I couldn’t help thinking how pathetic he has become.  There he sat in the Oval Office woodenly reciting his repetitive Grimm’s fairytale about how he needs a wall to prevent horrible Mexicans and other dark-skinned people from streaming, zombie-like, into this country to kill, maim, rape and torture innocent white Americans. He complained that the bad Democrats won’t give him the money to prevent this nightmare- which is what it is- his nightmare, not a reality.  It was like he was complaining to mommy.  “Mommy, I want you to buy me a Tonka big boy builder kit to prevent bad, evil brown people from hurting me.”

The Dems are saying no to this nonsense.  They are being the grownups in the room.  They are not willing to give Trump money for a fantasy wall or to help him regain his waning power.

By-the-way, this whole farce is really about Trump holding onto power.

Trump has been telling Americans this scary and very false narrative since he rode down the escalator at Trump Tower and OUR very real nightmare began as Trump ran for office with the help of the Russians and cheated his way to the presidency.  He won the presidency using dirty tricks and also using racist imagery and appealing to Americans who did not know any better or who did know better and were just racists.  Far more crime is committed by white Americans.  The people arriving at the border are hoping for a chance to get asylum and a better life.  There is nothing illegal about asking for asylum.  They are not a bunch of terrorists.  There were many other lies in his address to the nation that was essentially a rehash of the oldies from the campaign trail.

Trump is known to be a liar at this point.  He has cried wolf way too many times.  Even Americans watching Fox News learned the facts because Shepard Smith and Chris Wallace fact checked Trump’s address immediately afterwards.

Here is the truth the Fox News audience learned: “The government’s statistics show that there is less violent crime by the undocumented immigrant population than by the general population.”

Trump also argued for his wall by saying that immigrants carry illegal drugs across the border, but Smith pointed out that a wall wouldn’t make much difference there.

“Government statistics show much of the heroin actually comes not over the unguarded border but through ports of call,” he said.

Smith also pushed back on Trump’s claims that Mexico will pay for the wall via a revised trade deal.

In this stand-off mess of Trump’s own making, Republican lawmakers must make a bad choice to stay with Trump for fear of being primaried or split from him out of fear that they will not get re-elected by an angry electorate.   Rush Limbaugh and Ann Coulter demand of Trump that he continue to have his tantrum for a wall in the face of the humanitarian crisis HE made at the border and the humanitarian crisis HE made by shutting-down our government.  They are not our elected officials.  We should not be held hostage by these right-wing commentators.

Why DID Trump so desperately need to speak to the American people on Tuesday night that every mainstream channel was forced to give him airtime?  Trump was appealing to and really begging his voters and Congressional Republicans to stay with him, not leave him.  That was the underlying political purpose of the Oval Office address to America.  Trump is having a crisis over a looming loss of his power.  How do we know that was the real reason for his urgent address to the nation?  He made what has been a solemn occasion when used by other presidents, addressing Americans in the Oval Office about any number of real crises not any imaginary ones, into an ONLINE FUNDRAISER for his re-election! Both before and after the speech his campaign sent out an online pitch for money.  This was a disgusting way to use his platform as president.

Interestingly, the Democratic rebuttal by Nancy Pelosi and Chuck Schumer got higher ratings, higher viewership, than Trump did.

Trump is not doing well with this ploy.  It is only fitting that the wall he used to gin up his mobs on the campaign trail will be part of the dynamic that powers down this presidency by walling him into a corner demanding something the majority of Americans do not want.

No one is inspired by warmed up left-overs from a has been showman who only knows how to break things and is clueless about the real work involved in constructive governance.

Twelve Republicans in the House have flipped on him so far and he seems to be losing Republican support in the Senate.  There are four Senators who have peeled off so far- Cory Garner, Susan Collins, Tom Tillis, and Lisa Murkowski.  Hopefully more are coming, but sadly, the GOP has become a mass of quivering rabbits, so I am not going to hold my breath expecting more heroic action from that bunch of cowards.

The push for a resolution to our national crisis also needs to come from the voters.  Those voters who believed in Trump because of the wall will still love him, but those who voted for him expecting to get a better life, who are being used as hostages by this president, are calling their elected officials and making noise as well as having rallies across the country. If you are in a state with Republican senators please call them, e-mail them and send them letters that you will support the person running against them in the next election if they do not get Mitch McConnell to take a vote on the legislation passed by the House that would re-open government whether or not Trump says he will sign the legislation.  The Senators need to remember that they took an oath to support the Constitution and the American people NOT pledge allegiance to Donald Trump.

The wall of secrecy that has kept Trump safe in office despite his corruption and evident unfitness will crumble as his power fades.  He has relied on Republicans to protect him- nothing to see here, move along, move along.  Lindsay Graham has gone to the dark side and is calling for Trump to declare a national emergency, reopen government and let the crisis play out in the courts.  Graham is saying Trump must be appeased and get his wall (which translates to: he needs our support to stay in power) or the Republican Party is over.

Frankly, I can’t wait for the Republican Party to be over.

Faced with the bleak prospect that he is losing his power, Trump may well resort to a Hail Mary pass and declare a national emergency.  He will try for an autocrat’s last stand.  That will not solve his problem of loss of support.  If he does declare a national emergency, we will get to our Constitutional Crisis a bit earlier than we expected because the courts will tell him it is an abuse of power, which it is.

No matter what Trump does to try to regain his power, I don’t see it happening. Trump is weakening.  People are sick and tired of him.  He is retelling the same old Grimm’s fairy tale that no one who reads reliable news finds credible anymore.  The American people (up four points to 51% as of Wednesday) blame him for the shutdown.  The midterms were a rebuke that he is ignoring.  Michael Cohen will be testifying in an open hearing before the House oversight committee.  Mueller’s report is coming.  I do not see this going to go well for Trump even if he calls his mess a national emergency and tries for a money grab from other DHS funds (including funds for the victims of hurricane Maria in Puerto Rico and the California wildfires) and misuses the military by sending them to the border to put up some steel fencing that can be easily sawed through.  (I am not kidding.  It can be sawed through with a saw you buy at a Home Depot.)

Trump himself is the national emergency.  More and more people in this country know that.  But what will ultimately contribute to the end of his frantic reign is that Americans got sick and tired of him, turned their backs on him and refused to be scared by him anymore.