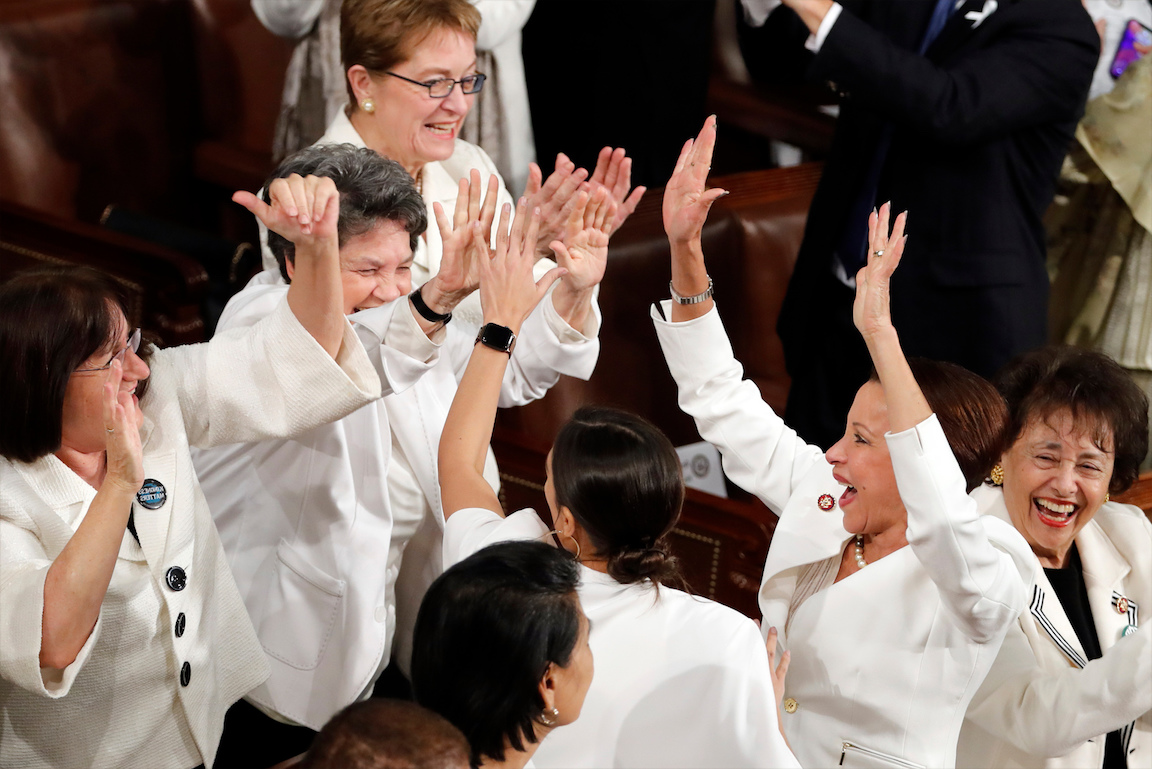 The man sitting next to me said, “Trump will ruin our economy, but win in 2020.”  This was what I heard from the man sitting next to me at an upscale dinner party.  I wanted to stick him with my fork.  The man who made this pronouncement to me is a successful real estate developer with projects all around the world.  He is not a Republican.  But he knows a ton of them.

“He will be re-elected because the Democrats are going to run someone who is too far left of center for a country that is still center right.”

When I heard this smug prediction from him, I had to challenge it.  How can Trump get away with ruining our economy but still win?

Here is what he said: “Republicans will vote based on their tribal affiliation”, he said.  “Just like supporting their team for the Super Bowl.  They will vote for their party no matter what.  They also like the conservative judges Trump is putting on the bench.  They liked the tax cut for the rich and they don’t want anyone to take that away from them. They like that he is anti-abortion and that is a single issue that overrides everything else for many of them. They have not been personally affected by his bad policies or the government shutdown.  And the Democrats will run someone too far to the left which will ruin their chances to win.” (Clearly he was talking mostly about rich Republicans, not the blue collar men and women who have been personally and  negatively affected by Trump’s tax bill, trade war and the shutdown. But his points were annoyingly well taken.)

I do not think this real estate developer is necessarily right about Trump winning in 2020.  I am not sure Trump will even make it to the end of his first term in office given the Mueller investigation, the SDNY investigations, the extensive corruption, his disastrous shutdown that about 60% of Americans correctly blame on him, his trade war that is causing farmers in the heartland to declare bankruptcy, and his rejection of the truth from his Intelligence officers that puts him at odds with his boss, Vladimir Putin, not to mention the newest horror- that he may well have urged AMI (David Pecker) to go after Jeff Bezos to blackmail him into calling off the Washington Post because it is hot on his trail, like a bloodhound, and is not giving up on the Khashoggi murder which will eventually expose the political, personal, corrupt connections between Trump, the Saudis and David Pecker.

Can Trump really survive all that?

Some say he will.  And some also say Trump will have every incentive to lie, cheat and steal to win the 2020 election because as a sitting president he cannot be indicted but as a former president he WILL be indicted.

So, I wonder if Trump does survive his first term and he does run in 2020, do we need to be careful not to choose someone to run for president who excites our passion on the left as progressives but scares all the bunnies in the middle who voted for Trump hoping for positive change after voting for Obama twice?  That group of tentative, uncertain surprise Trump voters in the middle of America who made him president, make all the difference in who wins the darn Electoral College.  These are the so-called Independent voter and undecided voter who often vacillate about who to vote for until the last minute.  There are fewer of them these days, as people choose up sides in this tribal political era, but they still hold the keys to the castle.

I love it that three fantastic women Senators have thrown their hats in the ring:  Elizabeth Warren, Kirsten Gillibrand and Kamala Harris.  I like them all.  I have met Kamala Harris in person, heard her speak and answer questions.  I know she would make a terrific president. She would be my personal first choice for president.

But I am worried.

What worries me is that if one of these women does become the Democrat’s choice for president, will too many Americans think that a woman is not the right choice, giving Trump the edge in 2020?  Is our country still too backwards to accept a woman for president?  Is our heartland still too full of people who have never met or worked with or been friends with a black woman, for example, and therefore have trouble trusting that a black woman could have their best interests at heart? Whoever wins in 2020 will need the support of white men and women in the heartland. Because of the Electoral College system, their votes count for more than those in deeply blue states like California where once the majority has gone for the Dems, the rest of the votes sort of pile up uselessly like dead fish on a wharf.

I love it that Bernie Sanders and Beto O’Rourke might throw their hats in the ring.  But the same concern comes along with them.  Are they too far to the left?  Will they scare the bunnies?

What if a white man, a Joe Biden, Jay Inslee, Sherrod Brown, or Steve Bullock is the choice for president, paired with a woman like Warren or Gillibrand or Kamala Harris as the vice-presidential choice?  That might be a winning combination: a white man who is progressive and looks the part of president to a center right electorate- a respected male with a feisty woman by his side.  But if that is the ticket, will women on the left be so angry they will not come out to vote, feeling they have been scorned and treated as second class citizens after all they have done to gain the impressive majority we have in the House?  Will Millennials stay home and sulk if the ticket is too centrist for their taste?

And now this billionaire, Schultz has decided he might run.  Mr. Starbucks coffee.  What makes him think he understands how to run a country?  I don’t care that he grew up in the projects and became a billionaire.  I don’t care that he wants to be a saner version of Trump and thinks he can bring everyone together.  He is just plain wrong.  He opposes Medicare for all and higher taxes on the rich.  He calls himself a centrist Independent but that doesn’t change the fact that if he runs, his legacy will be “Howard Schultz, the man who got Donald Trump re-elected in 2020.”  Why doesn’t he run for something like governor or mayor or dog catcher first to prove he can govern?

In the next months this will all play out.  We will get to see what happens and how people running for president handle the moshpit of publicity and attacks from the conman in the Oval Office.

I hope those of us on the left who have worked so hard to make the blue wave happen, can keep the ultimate prize in mind.  The goal must be ridding ourselves of Trump and Trumpism by the greatest possible tidal wave rebuke we can muster.  I am for the Democrat who can beat Trump in a landslide.  Full Stop.  We need a resounding unassailable victory for the Dems to educate the GOP about what Americans really want.  If we are going to get rid of the toxic waste, corruption and corrosive, racist politics Trump and the Republicans have amplified in this country we have to win big.

I will vote for, support, and work as hard as I can for ANY Democrat who will win big based on what we see in the coming months.  If that is Joe Biden for President and Kamala Harris for VP, that would be sweet and it would be a winning ticket, I think.  But if it is some other combination that can win big, I am all in.  All of the Democratic candidates are very close on the issues.  Remember that those who stand out in the election process who do not make it on the ticket as president or vice president, could become our next Secretary of State or Attorney General or hold some other crucial cabinet position to help rebuild our democracy.

Above all, we need to win back the presidency and the Senate and keep the House. If we can do that, we can get the change our country needs.  I hope we can all keep our eye on the prize, and, like the wonderful women of Congress, who wore Suffragette white and had a high five dance party during Trump’s SOTU, we must stay united in our mission of moving our country towards progressive goals and fairness for everyone.

How do we make sure Trump does not win in 2020?  By staying united.  By keeping a big tent open to all.  By treating each other with respect.  Above all, by working to elect whoever has the greatest chance to beat Trump.  That also means supporting the DCCC, the DLCC, and DNC.  These three groups were crucial for the success of the blue wave.  Let the women of the House and Senate, a dedicated group of progressive changemakers working together, be our role models!