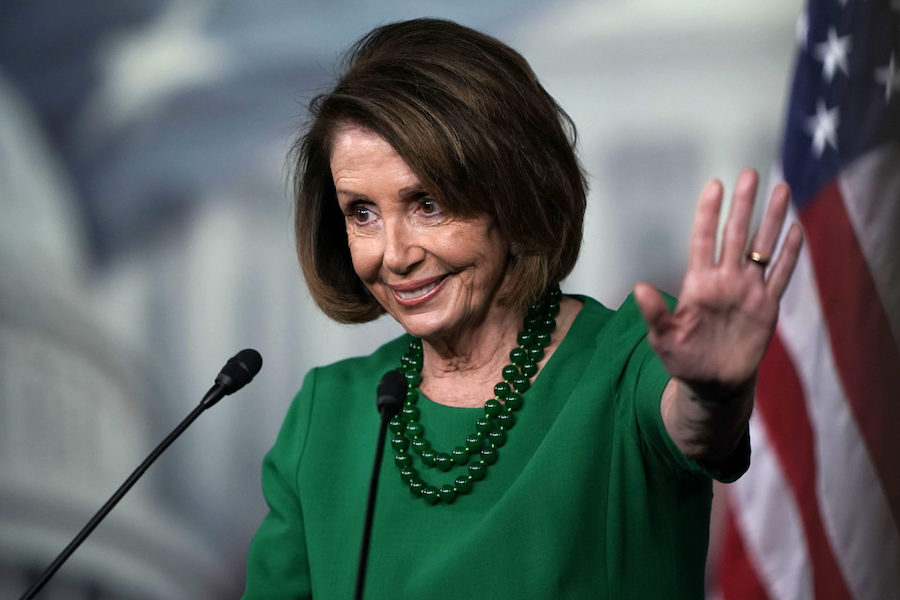 Our family went to Florida on vacation and I vowed to go off the grid for the entire week-long trip.  (Don’t worry, I will get to Nancy Pelosi and impeachment in a minute.) I did not write anything for the Markin Report during that time, limited my exposure to cable news, quit my news feeds and did not read any newspapers.  What happened?  The intense world of politics on cable news dropped away.  My occasional glimpses at TV felt as if I was observing a word cloud with “collusion” and “conspiracy” and “Trump” floating by, as if they were dissociated thought bubbles.  The whole tangled messy political world receded into the distance and existed more like background noise.

During the day my focus was immediate and present- the smell of roast coffee at breakfast, the clouds overhead drifting across a deep blue sky, the brilliance of sun after a winter in Chicago, the view of a waterway with boats gliding by, my granddaughter’s first delightful foray into a swimming pool.

When I encountered new people on my trip, I informally interviewed some of them about how they are responding to politics, to Trump, and their view of the Mueller Report.  (So, okay, I guess I didn’t go fully off the grid in every sense.)  But I was interested in what Americans were thinking and this was an opportunity to learn something from my informal survey.

From Uber and Lyft drivers, to food service workers, to a masseuse, a housekeeper, a relative who lives in Florida not far from Mar A Lago, and a Republican mayor who happened to be sitting next to me on one of the plane rides, I heard certain recurrent refrains.

One common theme was ambient cynicism. I heard: “In politics, everybody lies.”  “You think Trump lies?  Well, everybody lies! Democrats and Republicans.”  If I talked about how Trump lies significantly MORE and fabricates his lies out of whole cloth, it did not seem to influence the listener very much.  He or she might agree Trump is a worse liar, but the refrain was still “You can’t trust anyone.  Everyone in politics lies.”

Another recurring theme I heard was – “I don’t watch cable news anymore.  It’s too upsetting, too confusing.  I don’t watch anything but the local news.”

Another theme was that everyone I talked with, including the Republicans, had concluded that Trump is an awful human being, with serious character flaws and that he was also probably crazy, that he has committed bad acts in the past and maybe even while president, but that it didn’t seem to matter.  People seemed to accept that about him. He was held to a lower standard as a human being.  Or no standard at all.

One of the most interesting conversations I had was with a Republican mayor of a small town who was sitting next to me on one of the plane rides I took.  He was a terrific guy- bright, engaged and had a strong moral compass himself.  He looked forward to a day when our politics could be less tribal.  But when I asked him how he felt about Trump, his response was that although he did not like the guy, thought he was wrecking the Republican Party, and strongly believed that he was unethical and probably even nuts, that Trump has not been proven to be guilty of anything yet.

That was particularly irksome to me as a former criminal prosecutor, because Trump is violating the law every day by engaging in corrupt practices and violating the Emoluments Clause of the Constitution.  Many of his crimes are currently being investigated by federal and state agencies, but some are already revealed.  He is in fact an “unindicted co-conspirator” in the two-count felony campaign finance violations that Michael Cohen carried out at the direction of “Individual 1”.  “Individual 1” IS Trump.   If Trump were not the president right now and if the DOJ did not have a rule that a sitting president should not be indicted, Trump would have been indicted by now and charged with these crimes.  He would very possibly be facing prison time because these are serious criminal offenses.  Cohen is doing time for this.  Trump was the person who directed these crimes and would face more severe penalties because of that.

But this information has not sunk into the consciousness of Americans living their lives.

Even this smart, knowledgeable mayor, did not seem to register that Trump has already committed multiple crimes.  Or if it did register, the mayor had already written these crimes off as character flaws instead of criminality.  He said he was waiting for Mueller’s Report to see if Trump was guilty of something.

I think a lot of information about Trump has not sunk in because many people have turned away from the noise.  People are experiencing Trump and our politics as a confusing babble thrumming along in the background of their lives as I felt when I went “off the grid”.  People are busy focusing on whatever is immediately impacting their lives. And I get it. It is time consuming and at times, overwhelming, just to deal with life.

Will Trump win again in 2020 because so many people are off the grid and just living their lives, not listening to the commotion in Washington, DC anymore because it is too upsetting and confusing and not relevant to them?

And if this is the state of play in our country, what should the Dems be doing about it?

Nancy Pelosi has some of the answer.

She realizes that the American people are not focusing on the noise in Washington, DC.  According to Jim Messina, who helped Obama win his elections, Americans think about politics only 4 minutes a week.  They are trying to live their lives and manage their own problems.  For that reason, it is essential for Democratic lawmakers to keep the needs of the average American front and center.  Here is what she said:

“Impeachment is so divisive to the country that unless there’s something so compelling and overwhelming and bipartisan, I don’t think we should go down that path, because it divides the country.  And he’s just not worth it.”

To focus on impeachment is to give Trump and the GOP a winning narrative that “the Dems are trying to impeach the president and we have to save our guy who is a victim of a vicious witch hunt etc etc”.  Rejecting impeachment (unless there is bipartisan buy in) takes that narrative away from Trump and the Republicans.

What I learned by getting off the grid is that most people are probably off the political grid most of the time and living complicated lives.  But for those of us who are worried about our country’s future and the future for our grandchildren, getting off the grid is more of a furlough during an ongoing war.  Trump cannot be allowed to win in 2020.  For the sake of our world, our country, and our grandchildren.  I am back on duty doing my part to be sure he loses in 2020.  That is my North Star.  I hope it is yours too.