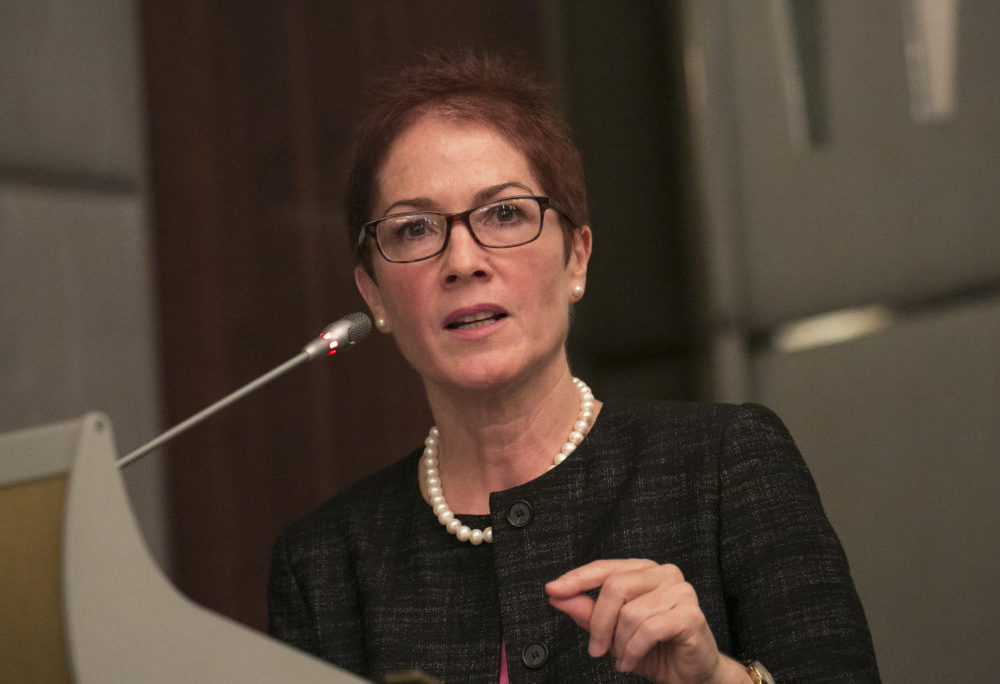 On October 11th Marie Yovanovitch, the former Ambassador to Ukraine, got up in the morning, dressed in her business suit and pearls and arrived on Capitol Hill to testify before the House Intelligence Committee.  She showed us how heroes act and speak in the face of personal danger.

She had been ordered not to speak to Congress by both the White House and the State Department.  She could lose her job, and she stands to be assaulted and slandered by Trump’s Twitterfeed, Rudy Guiliani and Trump’s slimy henchmen.  She has already been the subject of Guiliani’s corrupt mopes in Ukraine: Lev Parnas, Igor Fruman, (just arrested by SDNY) and the corrupt prosecutor working with Guiliani, Mr. Lutsenko, because she was too principaled to “play ball” with their scheme to do a hit job on Biden.  Orders from the White House and State Department not to appear before Congress are part of Trump’s ongoing campaign to obstruct Congress and keep us all in the dark about how shockingly corrupt he and his allies truly are.  What Yovanovitch did by showing up to testify was not in her self- interest, but she defied those orders not to appear because she understands there is a higher order that she owes allegiance to, and that is her allegiance to our country.

As the child of parents who fled Communist and Nazi regimes, she became a career foreign service officer to advance the interests of freedom and democracy.  She served as the Ambassador to Ukraine from August 2016 to May 2019, and during that time she was able to help Ukraine to become a more stable and independent democratic state.  That aligns with the goals of our country and the newly elected leaders in Ukraine who were fighting an anti-corruption “Revolution of Dignity” battle against Russian aggression and disinformation of which Ukraine’s president, Zelensky is a part.

In her statement to Congress, which she made public before testifying behind closed doors, she wrote in an impassioned and compelling way about how this administration is hollowing out the State Department from within.  Many career diplomats are leaving because they are not supported by the Trump administration.  Trump is stocking the foreign service with more of his wealthy donors like Gordon Sondland, who gave him a million dollars and who did what he could to help Trump out with his illegal pressure campaign in Ukraine. The State Department, like other government agencies, is suffering from attrition by Trump.  Yovanovitch is only one of many casualties.

She called on Congress to “take action now to defend this great institution and its thousands of loyal and effective employees.  We need to rebuild diplomacy…to advance America’s interests.”  She talked about the harm this administration is doing to our safety as a nation and our interests abroad.  “The harm will come when private interests circumvent professional diplomats for their own gain, not the public good.   [W]hen bad actors in countries beyond Ukraine see how easy it is to use fiction and innuendo to manipulate our system.”

Marie Yovanovitch was, in point of fact, throwing subtle shade at Rudy Guiliani, Trump, and Pompeo in her remarks and she probably threw some more shade in her 9 hours of testimony to Congress too.  But her tone and substance in that written statement was pitch perfect.  She told us the truth with certainty and with conviction.  Like Nancy Pelosi, who is also standing up for our country, our Constitution and our democracy, she showed us how to counter Trump and his gang of sleazy corrupt, self-dealing criminals; purveyors of disinformation and conspiracy thinking:  Be calm.  Be clear. Be resolute. Be unafraid to stand-up for the truth, ethics, and our democratic principles.  This is how we fight for the soul of our country.

Women are leading the way.  There are good men too.  But women are leading the way, I think, because fewer of them are part of the old boy network that embrace power and greed as aspirational goals.  As “outsiders” many women can bring a perspective that is grounded in greater ethics and morality.  Many understand the peril we face today and get it that Trump is dangerous to our world, their children and grandchildren.  He is a double-barreled threat: as an incorrigible criminal and would-be tyrant in pursuit of his own self-interest above the interests of our country unburdened by guilt or shame.  We have to get him out of office.  The next administration needs to counter powerful special interests including those that keep our Republican Senators from standing up for our country.

Women and young adults are showing us the way forward.

Teenagers Greta Thunberg and Parkland students David Hogg, Emma Gonzalez and others are speaking out about the perils our country and the world are facing.  Climate change and gun violence.  Their voices are powerful and strong and carry the same purity of message about stepping up to defeat global corporate interests like the oil and gas industry, the NRA, and other organizations that are out to make money at the expense of the future of our country and the world.

Greta spoke out for her generation when she said, “How dare you! You have stolen my dreams and my childhood with your empty words!”  “People are suffering, people are dying, entire ecosystems are collapsing.  We are in the beginning of a mass extinction and all you can talk about is money and fairytales of eternal economic growth!”

March for Our Lives Parkland activists have turned their attention to boosting voting registration and turn out and positioning themselves to run for office themselves when they are able do that.  They are rising up against corrupt politicians and special interests who are the central players in Trump’s hopelessly corrupt Washington.  They are building a national movement that uses gun control as a wedge issue to shame politicians who have good to great ratings with the NRA.

Some people are waking up to Trump’s poor judgement and his willingness to put his own self-interest above that of our country.  We are seeing the results of this in shifting polling numbers as our troops are abruptly removed from Syria leaving our close allies, the Kurds, to be massacred by Turkey.  This is inhumane.  Sick.  Horrible.  Americans understand not turning our backs on our friends, and yet, Trump is ordering this withdrawal, a terrible betrayal of our ally.  Why is Trump doing this?  He had a phone call with Ergodan and suddenly we are withdrawing the 1000 troop holding force that was protecting our country and Europe from Isis fighters who were in prison and are now going to escape.  Those American troops were leverage against an assault on Syrian Catholics too.  So why did Trump do it?  Is it because Trump has two Trump towers in Istanbul, and he is said to have some additional developmental interests in that country?  Self-interest is always the primary motivator for Trump.  Some day (I hope soon) we will find out what deal he was cooking so that he could make a big fat profit.  Just like Trump Tower Moscow, the deal he pursued during his campaign, Trump’s North Star is always greed.  You can get the man to do anything if it includes an agreement to build a Trump Tower and a check for lots of money for Trump.

Marie Yovanovitch, Greta Thunberg, David Hogg, Emma Gonzalez- these people show us how we can also speak out with passion for the good of our country.  Even in conversations with our neighbors and our families, we need to have reliable facts and then be fearless about speaking truth to those who are being lied to and misled by Fox News, Breitbart and other sources of fake news and conspiracy theories. Fake news is being injected into our social media by people who want to bring down our democracy.  There’s no need to scream or insult anyone.  Making fun of people might make you feel better but it doesn’t really help.   There is no need to shame someone who has been lied to by Fox News or some other purveyor of disinformation.  And, yes, there are some people who will not ever listen.  But there are also people who are confused about what is going on in our country and really do not know how corrupt this administration is.  Be calm but passionate. Be clear. Speak the truth.  Stand up for our democratic principles and help people understand that Donald Trump is not what he says he is.  The only way he stays in power is if we let him by failing to have our own American Revolution of Dignity Campaign Against Corruption.

Here is what you can do right now to participate in our revolution.

All of us can be a force to be reckoned with if we speak out, get active politically, and tell our elected officials to stand up for our country instead of fearing Trump’s twitterfeed.