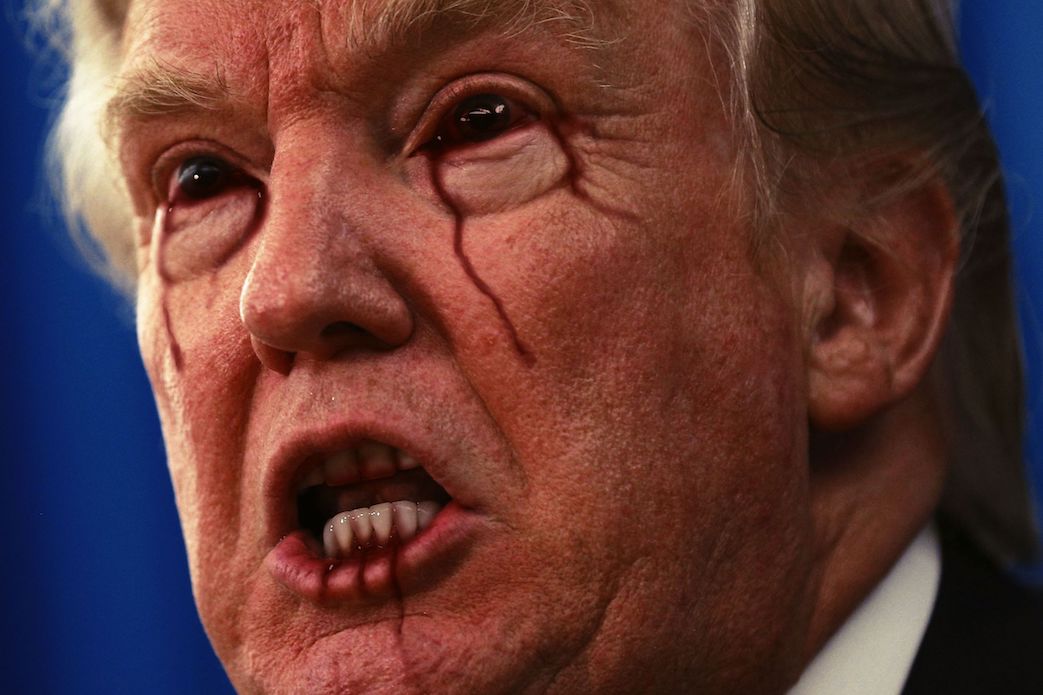 Now that Qasem Soleimani has been assassinated by Trump, the whole world wonders what the heck is coming next with this out of control, crazy president.  Biden said it well- Trump just recklessly “tossed a stick of dynamite into a tinder box”.  Retaliation? Of course there will be retaliation!  Iran cannot let something this big go without retaliation or it will be seen as a weak country.  So they will retaliate.  But they will do it without a direct military confrontation that they would lose given the military dominance of the US.  The approach will instead celebrate the legacy of Soleimani, who was the architect of asymetrical attacks using proxies around the world to carry out acts of revenge on unsuspecting people and targets.

Trump was trolled by a pro-Iranian group for starters.  They hacked and defaced a US government website. “A screenshot of the hacked site, which has since gone offline, shows a drawing of President Donald Trump with blood dripping from his teeth after being punched by a fist representing Iran.“  That was small potatoes. More cyber attacks are promised.  More to the point, contractors, businessmen and women, tourists, journalists and government representatives abroad are likely to become unsuspecting targets. We stand to lose the sense of safety and relative peace we have enjoyed as global citizens because of what Trump has just done.  The hard won 2015 Iran nuclear deal is totally dead now after this. It is just a matter of time now before Iran develops a nuclear weapon.  Iraq’s Parliament voted on Sunday to expel our troops from Iraq as members of Iraqi’s parliament raised their fists and chanted “Death to America.” If we lose our presence there terrorist groups will be able to reconstitute.  And Iran has vowed to target US military personnel in the Middle East as some 3500 of our service members are deployed to the Middle East.  Wait…wasn’t Trump going to end our involvement in Middle Eastern wars?

Our European allies are not jumping for joy with Trump’s targeted drone killing of a man who was thought to be next in importance to the Ayatollah in Iran, Iran’s supreme leader.  England’s prime minister, Boris Johnson’s reaction to news of the killing was this four letter expletive:  “f**k!” Even though Soleimani was a horrible man and a terrorist, the drone murder is being questioned by Adam Schiff, the House Intelligence leader, because it appears to have violated international law.

“The United Nations official in charge of examining targeted killings, Agnes Callamard, questioned the operation in a series of tweets, noting that the U.S. did not detail any specific plot involving Soleimani. Under international human rights law, she noted, a country may kill in self-defense only under extremely narrow circumstances in which the lethal strike was the only option to prevent the imminent attack. She also argued that the deaths of those killed as collateral damage, including drivers and security guards, were unlawful.

“We have carried out the attack on the territory of a state that plainly did not give us permission,” said Mary Ellen O’Connell, a law professor and an expert on international disputes at the University of Notre Dame. “The attack was unlawful, the assassination was not justifiable.”

There are norms and laws that countries have followed internationally because they protect heads of state and people in government from harm.  Just like the norm busting Trump has engaged in in our country, he is taking his show on the road and breaking norms around the world.  Trump wants to be the biggest bully on the world stage, so he is already threatening to take out 52 Iranian cultural and holy sites (in violation of international law according to Laurence Tribe, Harvard Law professor, and another impeachable offense) if the Iranians retaliate.  In a Vanity Fair piece just out, Trump’s foreign policy is neatly summarized as: “America First, Bitches!”  Yep. That is Trump’s international diplomatic posture in a nutshell.

Since Trump’s election we Americans have been forced to deal with daily crisis after crisis brought on by a man with endless grievances who lacks the ability to read, listen to good counsel, strategize or think ahead more than one step at a time, and who believes that whatever HE does is right even if it is not.

My father-in-law was a successful businessman who created the TV ratings system still used today to measure the success of a show.  He was good at sizing people up quickly.  He once met Donald Trump at a party at Mar A Lago.  His take on Trump was that Trump was a lone wolf kind of guy who was desperate for approval.  All Trump wanted to talk about with my father-in-law was his (Trump’s) TV show ratings and how he could get the ratings higher because he knew his show was the better than any other show but the ratings weren’t reflecting that.  He did not relate well to anyone at the party because he was not interested in other people.  My father-in-law described Trump as a restless man walking around mostly alone that night not making connections.

This is the man running and ruining our country and now the whole world.  He is still a lone wolf, an arrogant guy, seeking attention, unable to make connections and concerned above all about his image.  Much of the mess we are in now is the result of Trump’s terrible jealous rivalry with Obama’s legacy that is connected with his image.  Trump undid the Paris Climate Accord, TTP, the Iran deal and has been trying to kill off Obamacare and many other Obama era advances. Add to this list now the end of the Iran nuclear deal.  Iran will now accelerate its development of a nuclear weapon.  We know Trump’s MO after 3 years of this guy.  Trump always has to first break whatever it is he wants to change, then he says he is creating something that will be so much better! that bears his name, his label, his legacy, but often he cannot create that next thing because he is awful at working with other people.  He is great at the breaking part.  He is terrible at the rebuilding part.

How will the world react to Trump’s chest pounding with the death of Soleimani, which he and Fox News are touting as bigger than the death of Osama bin Laden?  The difference with bin Laden is that when Obama approved the raid that killed him, bin Laden was not connected to any state at that point.  He had retreated to a hide out and was living in isolation.  Soleimani, by way of contrast, was revered by many in the Middle East, was part of Iran’s government and was the mastermind of strategic terrorism carried out by Iranians and their proxies.  While Soleimani was a horrible man and a terrorist, Trump’s assassination of him will unify some unlikely bedfellows.

Before this targeted killing the people of Iran were opposed to the actions of their own regressive leaders, but now the Iranian have pulled together to rally around THEIR flag.  Before this targeted killing Iraq and Iran were not buddies, but now they have united against our country.  Because Trump has eviscerated our alliances globally, we do not have a lot of countries rallying around us at this moment.  What Trump has done instead is incubate a global response in opposition to what we just did.

Trump may think that by edging us closer to war he will benefit in terms of his re-election.  The press will cover the tension in the Middle East instead of his impeachment.  The impeachment will fade and be forgotten.  Americans will rally around the flag and finally we will all love Trump and accept him as our true savior.  This is a pipe dream.  After 2700 lies from this man, a majority of Americans have no faith whatsoever in Trump or his administration to tell us the truth.  The Democrats are already calling for evidence of the “imminent threat” that Trump and Pompeo cannot articulate or identify even in general terms.  Pompeo on the Sunday shows had trouble fielding questions about the so-called imminent threat because there was no imminent threat, boys and girls.  I predict the electorate will stay divided in their current tribal affiliations and that this event will create even deeper antipathies as we learn that there was no imminent danger that was prevented by killing Soleimani.  Trump’s base, the GOP and Fox News will rally around him but the rest of the country will not.

Hey, Americans, are we sick and tired of the drama queen in the Oval Office yet?  Are we sick and tired of this endlessly agitating reality TV show horror movie we are stuck with and worry about every single day?  Constant Mayhem, brought to you by Trump, the GOP and Fox News.   I hope we are sick of it and sick of him and the GOP too.  I think we are.  I think a majority of Americans are fed up and want to change the channel so we can get on with our lives in peace, have a government that works for us for a change with someone running the show who can actually cooperate with other people globally as allies and create alliances in our own country, someone who will unify not divide us.  Maybe some of those voters who voted for Trump as a flamethrower get it now that when you have a reckless disrupter, one who doesn’t think strategically, he disrupts things that are worth preserving and valuing- like our health care, our trade deals, the Iran nuclear agreement.  Tweaking can be better than destroying, y’all.

Instead of rallying around Trump because he may have set us on a path to war in the Middle East, I believe this targeted assassination will backfire and be further reason to motivate Americans to vote Trump off the reality show island in 2020. What do you think?