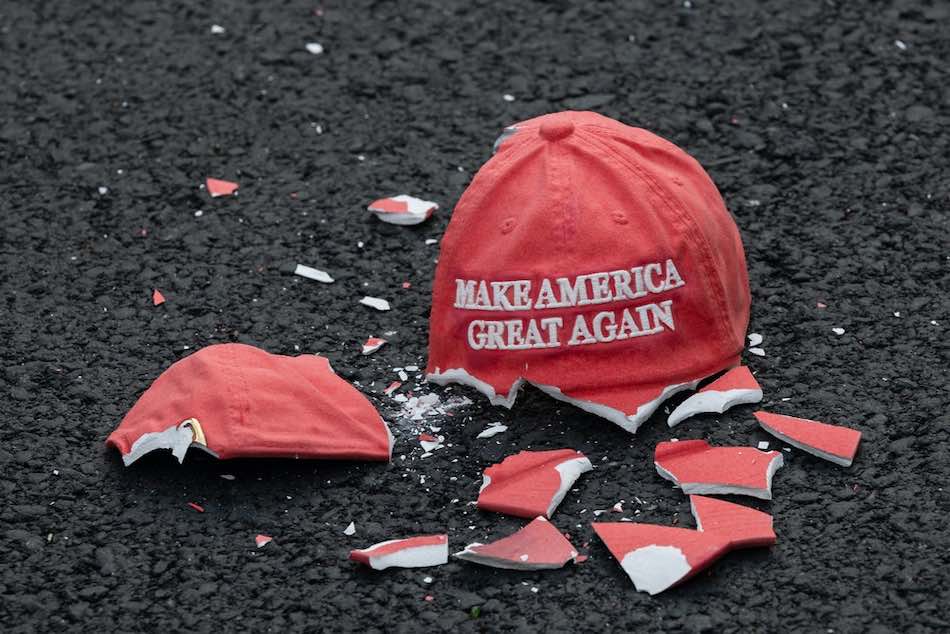 After inciting a mob to attack Congress there is no way NOT to impeach Trump a second time. Failing to do so sends a message that what Trump and his extremist followers did was not so bad. It would mean a failure to hold him and his domestic terrorist supporters accountable. Trump must experience serious consequences for motivating a vicious mob to attack the Capitol and try to hunt down and kill lawmakers including Mike Pence.

Hunting down and killing lawmakers was part of the mob’s mission- not everyone had that goal, but there were many violent extremists who have become interwoven with Trump supporters. They were yelling “Hang Mike Pence!”  And don’t tell me Trump didn’t know what he was unleashing. He did. He has been emboldening militias and white supremacists since he was elected. Many Trump supporters have been weaponized by the disinformation they are fed on social media, Fox News and other so called conservative sources of information. This mob was and will be Trump’s tool for revenge.

Reports have come out from a variety of sources that during the assault on the Capitol Trump was enjoying the spectacle of his people fighting for him. There is a video clip of him and his family watching the attack and partying, laughing and drinking as they watched. We have learned that cries for help from lawmakers directly to Trump went unheeded. He did nothing to help lawmakers as the crowd attacked the Capitol. Trump did not order the national guard when he was asked to do so. Pence ultimately had to make that call. The national guard was shockingly late to the scene.

Chad Wolf, the acting secretary of Homeland Security just quit. You have to wonder if Wolf failed to call in the troops to help push back the mob out of stupidity or a stand down order from Trump or someone else following Trump’s wishes. Calls to the Pentagon were met with a strange response also- they did not want a military presence at the Capitol because it wouldn’t “look good”. Was the Pentagon also part of some sort of stand down order from Trump or someone else? Trump removed the competent leaders on the civilian side of the Pentagon and replaced them with his loyalists. Was this idea in the works when he did that? Was it part of the reason he did that?  By lying to millions of Americans about the outcome of the election he and other Republicans have perpetuated an army of agitated followers that will still be weaponized after he leaves office.

Trump is leaving the presidency the way he began, by telling lies, whoppers, in fact, but now it is clear that Trump’s whoppers are believed by millions of Americans. The lies need to stop.

Disinformation is a Powerful Weapon

Republicans must quit lying about this election being stolen.  It was not. It was a free and fair election. Biden won. Trump lost. Republicans who fail to help Americans accept that simple truth have no business in Congress. Any Republican who does not tell the truth about our election should not be permitted to be part of the 117th Congress. These people are traitors. We need to aggressively combat disinformation and banish lawmakers who will not tell the truth.

The fact that Trump’s deluded supporters believe Trump won in a landslide and has been cheated out of his second term is one of the biggest reasons we are facing this awful national crisis. Trump has become the de facto godhead of a massive cult that includes an estimated 15 million people. Trumpists have merged with a growing movement of militias and white supremacists in this country. Trump has become their mythical godhead, the answer to all their prayers. That suits Trump’s warped psychology perfectly. It fits with Trump’s malignant narcissism.

These agitated people are harassing lawmakers at airports and delivering death threats to them. They are determined to terrorize state legislatures and pose a clear and present danger to the incoming administration.

Corporate donors are announcing they will no longer fund Republicans in Congress who do not stop lying about the election.

There are 33 companies so far and the list is rapidly growing. They include Dow, Marriott, American Express, AirBnb, Comcast and many more. The fact that these corporations are standing up for democracy has finally forced Kevin McCarthy to tell Trump in no uncertain terms that the election is over. End of story. Trump had been trying to continue the fantasy by claiming to McCarthy that Antifa was responsible for the attack on Capitol Hill. That fallacy is all over “conservative” media. McCarthy told Trump to stuff it. Okay. That’s a start. But he needs to do more.

The goal for our safety and the safety of our elected leaders is Trump’s removal from power as fast as possible.

The 25th Amendment would be an immediate removal from power allowing the Vice President to have the power of the presidency transferred to him immediately. That would be the right result but it won’t happen because Pence has to be on board and he isn’t.

On Monday Republicans blocked a measure to invoke the 25th Amendment.

Democrats then introduced Articles of Impeachment charging Trump with “incitement of insurrection”. The House plans to vote on the Articles of Impeachment on Wednesday. It will pass in the House with a majority vote. Trump will be the first president ever to be impeached twice. Of course, that will only make Trump more of a messianic hero to his angry mob of anti-government haters.

That reckoning about whether you are still on Trump’s side is also happening in the House with the Article of Impeachment.  Democrats will force Republicans to go on the record in the House with their vote for or against Trump for the sake of clarity, posterity and blame. There were some 140 Republicans in the House who were trying to continue the “stop the steal” lie. They still pushed for a challenge to the Electoral College votes even after the mob attack. After all that we now know about Trump’s role in the incitement, the damage done, the violence and the intent of the mob, are these Republicans still onboard with Trump? Really?! They need to be flushed out and crushed politically. Donors need to know who they are so they will not be given donations ever again. OR if they are, their donors should be called out.

Trump Might Resign Out of Fear of Federal Indictment for Incitement

Whoever incites, sets on foot, assists, or engages in any rebellion or insurrection against the authority of the United States or the laws thereof, or gives aid or comfort thereto, shall be fined under this title or imprisoned not more than ten years, or both; and shall be incapable of holding any office under the United States.

That language used by the Democratic lawmakers who wrote the Article of Impeachment aligns  so closely with US Code 2383 that the US Attorney in DC could probably copy it almost word for word in their charging document.

I think the language used in the Article of Impeachment is a direct warning to Trump’s remaining allies and aides that Trump is very likely going to be indicted for this parallel federal crime of inciting mob to attack the Capitol. If that happens, and he is found guilty, he could face up to 10 years in prison and will not be able to run for president again.

There are some interesting hints that there could be a concerted effort afoot to get Trump to resign. One is that Trump is suddenly afraid of going to jail. What is causing that sudden fear? Why did that information leak just now?  I think he is being warned he will be indicted for incitement to insurrection by the US Attorney of DC and that the evidence in the case would be strong. He really could go to jail.

We have also learned that Bill Barr and Pat Cipollone (two lawyers Trump still trusts) are telling him he should not try to pardon himself. Why are we hearing that again? Why is that suddenly so important to these lawyers to tell Trump?  Because if Trump stays on until the end of his presidency the only way to avoid a federal indictment for this crime would be self-pardon. These two lawyers are telling Trump that move will not work. He really could end up in jail.

The only way out for Trump, therefore, is for him to resign and let Pence pardon him. I wonder if that’s at least part of the conversation Pence had with Trump today when Pence finally went to the White House to meet with the man who tried to get him hung by an unhinged mob.  I really wonder if Pence told him that if he resigns he would give Trump a pardon.

Even if Trump is being pressured to step down to save himself I do not know if he will do it.  The man is unable to process reality consistently. In a moment of clarity, he might listen to reason and resign.

What Happens After Trump is Out?

Trump and Trumpism must be crushed.  There are groups working on that right now.  I will write about that effort in coming blog posts.