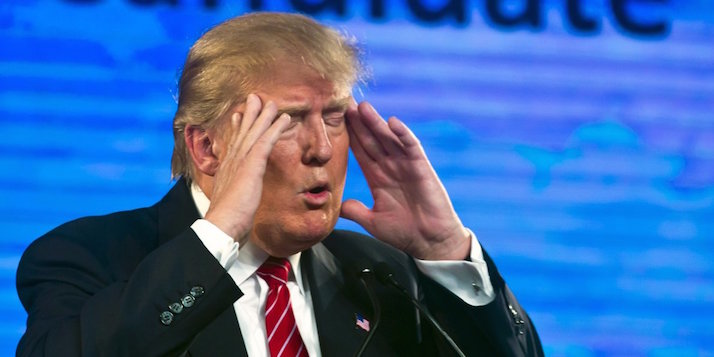 On Thursday morning Donald Trump phoned in to Fox and Friends during his morning “executive time” and went on a wild and crazy rant that lasted 31 minutes while the three hosts went from looking happy to worried, to deeply concerned to horrified.  Finally, after getting a call from Rupert Murdoch (according to some sources), the hosts reminded the president that he probably had a lot of work to do today, right? and maybe it was time to wrap it up.  They did the equivalent of using the sheep hook to get our deranged president off the air.

What caused them to be so concerned?  It was his voice and the tone as well as the content. The president sounded frankly manic.  My husband is a psychiatrist.  He said “Yep.  He sounds manic. He is perseverating.”  Trump’s speech was pressured.  He went on and on obsessively raising grievance topics that were recycled from the past involving the Russia probe (no collusion), how upset he is about the DOJ and FBI, Comey and Clinton and much more.  Kanye West got into his ravings.

While he was ranting along on Fox News, Michael Avenatti, Stormy Daniel’s attorney, was on Morning Joe on MSNBC.  On that program the producers caught wind of the crazy shit going down on Fox and Friends and they interspersed snippets of Trump’s rant with Avenatti’s reaction in real time.  I happened to be watching.  It was a remarkable half hour that underscored the truth of Michael Wolfe’s book describing how Trump actually behaves in the White House.  Unhinged.  We got a peek behind the curtain.

There were two key statements Trump made in his rant that may have seriously damaged Trump’s lawyers’ arguments in the Southern District of NY (the Michael Cohen case).  Trump’s lawyers are trying to allege attorney- client privilege.  There was a large haul of evidence the FBI obtained from Michael Cohen’s offices and home, pursuant to their search warrant.  In that haul of that seized material there are some 16 cell phones that may contain incriminating statements made by Cohen and possibly Trump as well.  There is a lot of other evidence as well.  Wow.  Trump’s lawyers are trying to say this treasure trove which is very likely to contain incriminating evidence, should not be allowed into  evidence in the coming trial  (once Michael Cohen is indicted), because they are subject to the attorney-client privilege.  About 2 hours after Trump was on Fox and Friends, the US Attorneys in the Southern District of NY filed to amend their pleadings to make it easier for more of this evidence to come in at the time of trial.  What did Trump say to trigger that?  He said 1) Michael Cohen is primarily a business man.  (If that is the case he cannot allege he has the attorney-client privilege.), and 2) Trump said that Cohen does only a “tiny tiny fraction” of his legal work.  (If that is the case, the attorney client privilege is going to be scrutinized by the court and it may not apply to this matter at all.).  Trump effectively damaged his chances to keep out any “smoking gun” conversations he might have had with Cohen in those taped phone calls.  Prosecutors love taped conversations because the jury gets to hear the defendant himself telling the truth of the matter when he thinks no one will ever listen to what he is saying.  Nixon found out about the power of the taped conversation.

There was another statement Trump made that helped Michael Avenatti’s case.  Avenatti wants to force Trump into being deposed in the Stormy Daniels matter.  Avenatti claims that he can get Trump to perjure himself under oath in no time flat if he can just get him under oath in a deposition.  He is probably right about that, given Trump’s inability to tell the truth.   What did Trump say that helped Avenatti get closer to his goal?  Trump admitted that Cohen does in fact represent him in that “crazy Stormy Daniels deal”.  Trump had been pretending that he did not know anything about that matter.  He told reporters that on Airforce One when they asked if he knew anything about the $130,000 hush money paid to her.  He said,” No. No.”  And “Talk to my lawyer, Michael Cohen.”  (As if Cohen had gone rogue and decided to pay off Daniels all on his own.) That was never realistic, but Trump was acting like he had no clue about this Daniels matter.  However, now there are two different statements, two inconsistent statements made by Trump, so the judge is far more likely to require that Trump be deposed under oath to get to the truth and a fair resolution of the legal claim.  Avenatti is closer to his goal of deposing Trump thanks to Trump’s rant.

Under the law, if a defendant makes a statement to someone else, and that person is called as a witness in the trial, that person cannot tell the jury what the defendant said because it is hearsay, a statement that is considered unreliable because it is not direct testimony.  But there are exceptions to the hearsay rule.  An admission against interest is one such exception.  Why?  Because the law assumes no one would be stupid enough to make a statement against their own interest unless it is true.  Prosecutors love and know very well all the exceptions to the hearsay rule to get evidence in over the objection of the defense attorney.  And this one, an admission against interest, is great because, again, you get the words of the defendant when he thought no one would hear what he was saying.  You get the truth.  Donald Trump just set up a beautiful example of an admission against his own interest by saying on TV that Cohen is in fact his lawyer in the Daniel’s case.  He cannot deny it anymore.  Which means that he is that very David Dennison, the guy who failed to sign the NDA agreement for Daniels to stay silent.  Trump’s assertion on air means he was also clearly involved in a pay off scheme that Cohen set up close to the time of the election which raises campaign finance violations and possibly other criminal acts or civil violations.

Perhaps most telling of all, however, is that Trump threw Cohen under the bus in his rant  Thursday morning by saying Cohen really was not much of a lawyer for him and that if the SDNY US Attorney’s Office is after anything, it must have to do with Cohen’s own shady business dealings.  Smack down.  Trump just distanced himself from Cohen.  Trump is saying Cohen must be the bad guy and, hey, I hardly know him.  Cohen has been saying for years that he would take a bullet for Trump, that he would be loyal to Trump forever.  But once the indictments come down and Cohen faces years and years in jail away from his family,  the opportunity to tell the truth to the prosecutors in exchange for a reduction in his sentence is going to look mighty good.  The prosecutors will no doubt remind Cohen about what Trump said on Fox and Friends.  “Trump, your boss, hung you out to dry.  Do you really want to go to jail for 30 years to protect him?”  I think Trump just insured that Cohen will flip.  If Cohen does flip, if he does decide to work with the prosecution to reduce his sentence, then Trump is in big trouble.  By throwing Cohen under the bus, Trump just threw himself under the bus.  That was one mighty damaging rant, Mr. President.  As Michael Avenatti said, “I hope you call up Fox and Friends every morning.”