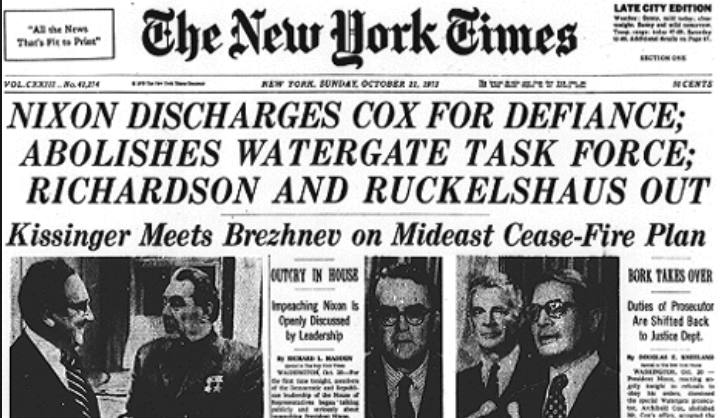 We may be getting close to the dreaded Constitutional crisis, the showdown between the Department of Justice and our would-be dictator-in-chief, because we appear to be moving ever closer to this president’s version of Nixon’s Saturday Night Massacre.  This is the moment a lot of us have been worrying about for quite some time- a collision between Trump and his enablers vs our Justice Department.

What is happening now that is different from before?

Before now Trump expressed his dissatisfaction.  But yesterday Trump gave the Justice Dept an ORDER to investigate the investigation into his campaign. It is not OK for a President in a democratic country to order the Justice Dept to act as his own personal investigatory squad where there is no evidence of wrongdoing that has come to the attention of that department.  But Trump is running the presidency the way a Mafia Don runs his gang or a dictator of a banana republic.  Why does Trump want and need “protectors”?   He must be guilty guilty guilty.  That is the only reasonable conclusion we can come to after all we have seen of his antics to obstruct and all we have learned about his associates’ interactions with Russians, not to mention the sheer number of indictments that have already been produced by this remarkably fast paced investigation.

We are also learning more every day from reporters about foreign government approaches to the Trump campaign not only from the Russians but also from the Saudis and UAE.  They no doubt approached to provide “help” with an eye to being helped in return.  We are getting a clearer picture that Trump has been running his campaign and now our government as a corrupt operation in which he and his family are enriched in exchange for favorable policies for the foreign governments who will pay to play.  No wonder Trump wants to get rid of the pesky rules of law that would limit him from engaging in these corrupt practices!  No wonder Trump is giving Rod Rosenstein, this order to investigate the FBI for wrongdoing.  That order is a calculated ploy to box in Rosenstein and others in the FBI so that Trump can have a pretext for demanding something they cannot give him, then order them to do what he demands of them, which will precipitate their resignations or firings, and open the door to replace them with people who will limit and damage the Mueller investigation and other activity of the FBI behind closed doors.  This is an intentional effort to have a chilling effect at the very least and to damage or destroy this investigation and others conducted by the DOJ if we assume the worst.  Trump is a very sick, very paranoid person.  But I do not agree with people who say he is stupid.  It is true that he seems unable to read or to recall important details such as the difference between HIV and HPV.  But he is ultimately a calculating person, employing a kind of reptilian brain in which he is always out for his own self-preservation and greed, seeking what is best for himself and his family without regard for others.  He is very good at that.

So, did we get to the brink of this abyss as a result of the weather in Florida?

Trump was not able to play golf over the weekend because it was too rainy in Florida, so he stewed and obsessed (as he often does) and then went on a tweeting rampage.  Unlike past tweets, this time he imperially DEMANDED that the DOJ investigate the investigators alleging that his campaign may have been “infiltrated or surveilled for inappropriate (political) reasons.”  This is red meat for his base.  Trump’s enablers, consisting of Devin Nunes, Kevin McCarthy, Jim Jordan, Mark Meadows and the Freedom Caucus, Sean Hannity, Paul Ryan, Rudy Guiliani and others loyal to him, are pushing out this message as a way to get the Department of Justice investigation blocked, limited or damaged.  They are going to try to limit or prevent any more snooping into the doings of his campaign or his corrupt presidency.  Trump and his enablers are cynically calculating that the American people will not care if the probe is damaged or destroyed.  They think the American people are too dumb and confused by the Mueller probe.  They think that the niceties of a democracy are beyond the comprehension or concern of the American people.

Trump and his allies are working overtime to strong arm our Justice Department.  To that end we also have Rudy Guiliani claiming that Mueller will end the obstruction of justice part of the investigation by September 1st.  We do not know for sure if Mueller or a member of his team actually said that because Guiliani is not a trustworthy source of information.  But we have that message being spun by Guiliani across as many cable news shows as he can get on.  This is another way to apply pressure on the DOJ.

The current strong-arm tactic and being employed by Trump and his right-wing goon squad is this nonsense about an informant who was a PLANT or a SPY placed inside the Trump campaign as a way to entrap people involved in Trump’s campaign.  This is inaccurate.  To get approval for the use of this informant, the request had to go all the way up the chain of command in the DOJ and most likely to the AG himself to sign off.  Trump and his gang are muddying up what happened on purpose.

What is the truth?

It is true there was an FBI informant (someone also trusted by the Russians) who worked with the FBI and had conversations with Carter Page, George Papadopoulos and Sam Clovis to find out if the Russians were trying to infiltrate the Trump Campaign. There had to have been clear indications and disturbing information that the FBI was getting from reliable sources that people in the Trump campaign were being approached by Russian operatives who wanted to help Trump get elected in exchange for favors.   If the FBI had not investigated this, they would have been subjected to criticism for failing to investigate something so clearly illegal.  And let’s be very clear.  It is ILLEGAL to solicit help from a foreign nation to influence an American election and that is true whether or not you are ignorant of the law.  In this case Trump himself and his campaign were not ignorant.  They were briefed and warned about this threat and the law.  Being a political novice is not an excuse under these circumstances.  Period.  And if the shoe were on the other foot and Hillary Clinton’s campaign or Hillary herself had done what Trump and his campaign did, we would be hearing cries of “Treason!”  Instead of “Witch Hunt”.

Sally Yates was on “Morning Joe” this Monday.  She was asked to comment about what she sees going on with this administration particularly with Trump’s demand of the DOJ.  She used the analogy of the boiling frog.  The frog in boiling water doesn’t realize that it is getting boiled until it’s too late.  We have been seeing so many unprecedented acts by Trump that “we the people” are essentially being boiled without being aware of the extensive damage he is doing to our democracy.  Trump’s behavior is becoming normalized.

We can’t let that happen.  We have to stay vigilant.

What might stave off the Constitutional showdown or confrontation?

Rod Rosenstein’s reaction to Trump’s command seemed to be to try to placate him and buy some time.  Rosenstein referred the president’s complaint to the Inspector General to add to the ongoing FISA review investigation being conducted by the IG.  Rosenstein also seems to be willing to disclose some information to Trump and his team.  They are sitting down together to discuss what can be revealed to Trump and John Kelly this evening.  That in itself is worrisome.  How is it acceptable to reveal information that the subject can use to doctor up his testimony,or that of other witnesses?   Since when does a subject of any investigation get to check out information against him prior to an indictment?  That is frankly a horrible precedent.  And you have to wonder- will that be enough for Trump?  Will that hold him back from his version of the Saturday Night Massacre?

We will find out.