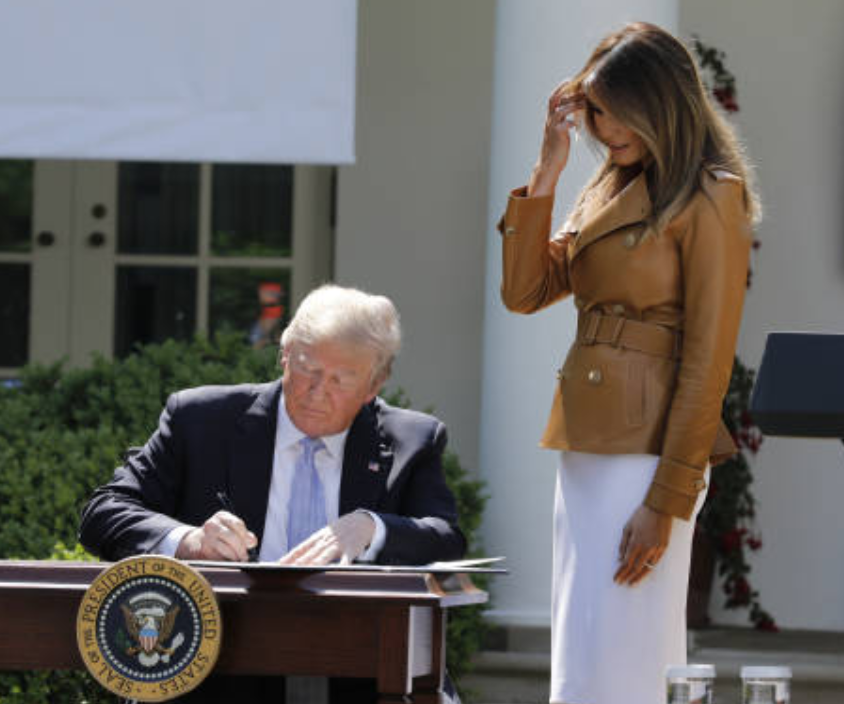 We are hearing a lot of opinions about whether a president can pardon himself.  This question has gone from being something a constitutional law professor might put on the final exam, to a widely debated topic on cable news and main stream media.  Why?  Because Trump has raised the notion and put it front and center by granting pardons right and left to people who did not even ask for them… and some who did.  He is reportedly giddy about doing even more of this pardoning stuff.  Recently, he tweeted out that he could pardon himself if he chose to but why would he do that since he has done nothing wrong.  As of this moment in time, Mueller has not presented evidence of Trump’s wrongdoing in the public space, so Trump can make that claim.  There is a void right now where evidence of Trump’s misdeeds will be revealed in the future.

Trump is the Dennis the Menace president on steroids.  When he became the 45th president he immediately looked around to see what he could get away with.  He started kicking in this door and that to find out what would hold and what would break.  He went around firing his virtual BB gun at various windows, putting holes in some of the windows, shattering others and waiting to see if the grownups would stop him.  And, it turned out, the only grown-ups who had ability to stop him, namely the Republicans in Congress, pretended that everything was just fine and dandy with the little hellion in the White House.  Nothing wrong here. They have turned out to be Trump’s enablers. They would tell you they are forced to be his enablers because he has an 87% approval rating with Republicans.  In effect, they are afraid to be the adults in the room because Dennis the Menace is so popular with the people they need to vote for them and give them money to get re-elected and offer them cushy jobs when they leave office.

Every so often a brazen Republican speaks out raising the possibility that maybe, just maybe there is a Republican out there with a spine.  But then we hear that this brave soul will not run for office again.  There has been little to no muscular push back by Republicans on Trump’s violations of our norms, no grown-ups in the room with Dennis.

Now Trump has found the greatest toy ever! that makes him feel like he is the powerful king he yearns to be.  He has latched onto the pardon power.  And he is using it to send messages to his pals and his family, reassuring them and himself that he has this “thing” that, as Governor Rod Blagojevich once famously said, “Is f—cking golden.”  Of course, Blagojevich said that before he was jailed.  And to be clear, Blagojevich WAS indicted, convicted and sentenced for his intended corrupt use of power.

Trump, who never follows the law and wants to BE the only law there is, will surely want to make the point that political corruption is not a big deal.  He will do that by pardoning Blagojevich.  Wait for that.  It’s coming.

What’s Trump up to?  Obviously, Trump is sending messages about how big and powerful HE is and he is trashing the justice system in the process.  He is sending his version of a bomb to the prosecutors he fears and despises: James Comey, Patrick Fitzgerald, and Preet Bharara, by undoing the work they did to prosecute these high-profile cases and individuals.  Boom.  Trump can undo all of that work they did to investigate and prosecute by waving his magic wand!  He simply grants a pardon.  F—YOU!  He is also sending messages to key people in the Mueller investigation that if they put loyalty to him over cooperation with Mueller, he has this golden pardon power he can use that is a higher power than the law or justice.

The presidential pardon power as written in the constitution does not have obvious limitations but there are some limits to it.  Generally, presidents cannot pardon people for state crimes that have been committed by the same actors facing federal indictment or conviction.  If a pardon power is used for a corrupt purpose courts might decide to react and interpret or define the power in a new, more restrictive way if there is a case or controversy that arises and requires a ruling.  A less supine Congress might also act to limit or define the power.  We also know that if the president pardons someone, that means that person loses the power to assert his 5th Amendment rights against self-incrimination in that matter, therefore, pardoned people can be subpoenaed to testify before the grand jury and answer every question put to them.  If they lie, that new lie can be charged as a separate and new offense.  Given Mueller’s blue ribbon team of agents and prosecutors, there would be corroborating evidence to check for accuracy against false statements made under oath.

So, what about the idea that Trump might decide to pardon himself?  First, that would mean that Trump was guilty of something.   I believe the key to the public reaction is embedded in the substance and nitty gritty facts of that something that Mueller would be telling us about.  What would he be pardoning himself FOR is the pertinent question.

We have seen Mueller’s teams’ charging documents already.  They are detailed compelling and granular.  They are instructive.  They are indictments that speak to us, educating attorneys, journalists and the public.  They have only started to  tell us the story about what happened to our country, namely, we were attacked by a hostile foreign power, Russia, and our free and fair elections were assaulted.  We may, in fact, have a president who is not legitimate.  We do not know that answer yet 500 days into his presidency.

The very fact that Trump keeps saying there was no collusion is indicative of how desperately he wants us to believe that assertion.  His references to witch hunts, hoaxes and Spygate are more evidence of desperation and the need for a public relations gambit as a foil against the coming truth.  But the reason we are getting this level of fantasyland in the public space is because Mueller has not spelled out the details of the crimes of the Trump campaign team or Trump himself yet.  There is a void where the evidence would be by now if this was an actual trial.  Rudy Guiliani and Trump have free rein to say anything they want to right now.  Trump has free rein to pardon anyone he wants to right now and play around with the idea of pardoning himself.  But only because there is a void where the evidence is going to be.

Let’s assume for a minute that Mueller sends a report to Congress or there is an indictment of co-conspirators that spells out in excruciating and intricate detail how Trump Jr., Flynn, Manafort, Gates, and a host of other people in Trump’s orbit and connected to his campaign, knowingly engaged in a conspiracy with Russian operatives and spies to defraud this country of a fair election and then took steps to cover it up.  Because Trump is a sitting president and DOJ has rules discouraging the indictment of a sitting president, Trump will most likely be named as an unindicted co-conspirator, as Nixon was in the Watergate case rather than an indicted co-conspirator.  But that will not prevent the factual evidence from being known.

Once fact based evidence is out in the public domain, I believe it will be impossible for a majority of Americans to accept the refrains we keep hearing now in the absence of evidence. Claims that “There is no evidence of guilt”, or “What did the president and his allies do?  They didn’t do anything!”  will be answerable with clear and compelling, factual information and documentation and probably taped conversations.  Once there is a detailed recitation of the evidence, fantasyland will be much harder to sell to a majority of sane Americans.  Selling the Trump Guiliani Fox News version of unreality will call for a suspension of logic and reason.  Some will make that leap of faith, but most rational people will not.

I am assuming that Mueller will present a rock-solid case for conspiracy and, or obstruction of justice.  If he does, Trump’s pardon power will suddenly radically shift over to effectively become convincing evidence of obstruction of justice.  If Trump dares to try to pardon himself in advance of a trial or pardon others in his inner circle once strong evidence is out in the public domain, a majority of Americans would see Trump for what he really is-namely, a self-serving traitor.  Many already see him this way.  Many more will realize that the evidence is too clear to pretend he is not guilty.  His cult-like base will stay loyal.  But that base is estimated to be only about 30 to 35% of the electorate right now.  Nixon’s approval rating plummeted from about 48% to 26% as Watergate findings came out before he was forced to resign the presidency.

Some Republicans are smart enough to see what is coming.  Paul Ryan quelled Trump’s paranoid fantasyland claim that there was a spy in his campaign put there by the FBI.  Ryan said- the FBI did nothing wrong. He also came out with the important statement that was a smack down of Trump’s authoritarian urges.  Ryan said: no one is above the law.  Trey Gowdy (the guy who ran those pointless Benghazi hearings to throw shade on Hillary Clinton) even he says Spygate is fantasyland and the FBI did nothing wrong.  There are a few other Republicans who see what is coming and are trying, albeit feebly, to get on the right side of history.  But so far, all of them are also getting out of Dodge and not returning to Congress.  Nonetheless, they can see the handwriting on the wall foretelling what is going to happen.

What will happen?  Will Dennis the Menace in the White House use the pardon power for himself?  Here is, I think, the realistic answer: Once there is convincing evidence of Trump’s wrongdoing in the public space , Trump would not be able to get away with pardoning himself.  By the time he might want to use the power on his own behalf, the evidence of his wrongdoing will be known to the public and everyone, including these rabbit-like Republicans, will be forced to choose between democracy or Trump, law or Trump, and reality or Trump with what we can anticipate will be a majority of the American people rejecting Trump based on the evidence Mueller reveals.   That does not bode well for Dennis the Menace and his magical pardon power.