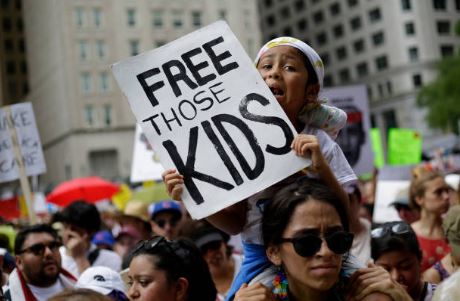 The Families Belong Together Rally and March in Chicago drew a crowd estimated to be 60,000.  Similar crowds gathered in over 700 other, mostly urban, locations around the country on Saturday, June 30th.  It was a boiling hot day in Chicago, but that did not keep people from coming out to Daley Plaza to stand up for immigrants and asylum seekers and for our country as a place where people can come for a better life and will contribute to make our country better as well.

There was music.  There were clever signs and heartfelt signs.  One sign read “Make America Kind Again.”  Another read “Fight Ignorance Not Immigrants.”  There were children riding on the shoulders of their parents carrying signs.  There was a large cloth flag of Mother Mary that was held high, waving in the wind over the crowd.  There was a cage carried around throughout the crowd by a group of men and women that had black and white photographs of children and mothers at the border attached to the sides of the cage.  One of the speakers was a mother who expressed her anguish – how her son had been taken away at the border and she has still not seen him.  There were tears and hugs.  There were many other inspirational speakers and there was outrage expressed as well.

At one point, when the Indivisible group was on the stage, an angry anti-protest protester got onto the stage, shouting and yelling about something unclear, about being mistreated in some way.  He tried to elbow his way, grappling with people to get to the front of the stage so that he could grab the mike away from the speaker.  He was surrounded by a group of about a dozen or so men and women who had been scattered around the crowd as volunteers, wearing lime green jackets.  They materialized, coming together seamlessly, as if on cue, around this man.  For me, the most interesting moment of the whole rally was watching how the volunteers handled this difficult situation.  Here was a very angry guy surrounded by volunteers.  What did they do?  They spoke to him gently and calmly.  They tried to understand what was upsetting him.  When he tried to break through the group, they pressed together firmly to keep him inside the circle.  Eventually he sat down and poured out his grievances while one of the volunteers sat with him listening to him and comforting him.  It was a remarkable display of emergency therapy for an anguished man.

People are hurting in this country.  People are in pain.  Trump rose to power on grievance and fear and has manipulated and magnified that anger and pain for his own ends.  He, along with Republicans, have intensified the divisiveness in our country with efforts to kill the Affordable Care Act and with the evil meanness of the Zero Tolerance policy separating children from their parents at the border to punish asylum-seekers.  Republicans also  passed a tax bill that helped their rich donors and corporations but not the average guy.  Trump is damaging relations with our allies, waging war on our allies and slapping tariffs on goods that cause retaliation by our formerly neighborly countries, now angry with the US.  Whether you believe Trump is a Russian asset in the White House, it is obvious that he is doing Putin’s bidding.  And to the extent we fight among ourselves, Putin gets ever closer to his goal of destroying our democracy.

What is the answer to this divisiveness?  I think the answer is a mixture of Kindness.  Compassion.  Caring.  Listening.  But also outrage and standing up for what is right together as a group in non-violent protest.  This is what we saw at the Rally in Chicago.  It’s the opposite of what we see with the Trump administration.  In this country we are all in need emergency therapy these days.  We need to sit down with each other and try to listen before we yell, try to hear before we conclude, try to be open instead of thinking we know it all.  Walk a mile in someone else’s shoes.  Speaking out to preserve our democracy and expressing outrage is part of the therapy.  Reaching out to people in pain is also part of healing.

I am not saying that we should spend a lot of time and energy on the hard-core Trump supporter.  I think those folks are too far gone.  But there are many Independents and progressives who are hurting.  They feel forgotten.  Who is listening to them?  Who cares about them?  There are many people who are anguished about what Trump is doing to our country and the danger he poses for all of us on planet earth.  Who is helping them?

The answer I see is coming up from the grassroots, from the women and men running for office, many of them for the first time.  I am seeing Democratic candidates running for office who are engaged in a kind of voter therapy.  Stacey Abrams is a wonderful example of this approach.  She and her team go door-to-door in Georgia where she is running to be the first black Governor of that state.  She listens first.  She asks people to tell her their troubles.  She hears them.  Then she asks them if they know what a governor can do.  She explains.  Then she says, if you will vote for me I will remember you and I will help you.  Face to face, person to person, she and her team create trust and convey compassion.  They also vow to help.

I do not know if Stacey Abrams will be successful in becoming the next governor of Georgia, but her approach is the right approach.  She couples this approach with clear, well-articulated goals that are economic goals.  Education, health care, and jobs are the focus.  She doesn’t bother talking about Trump.  She ignores him.  She herself is inspirational because she is compassionate, and articulate.  She is also unapologetic about what she believes is right and fair. She can express outrage convincingly, with maturity and without having a temper tantrum.

We all need to speak out and support others who speak out about what is right and fair at this moment in our country on the brink of the abyss with so many spineless and soulless Republicans in power.  The right approach is relatively simple in its essence:  Do unto others as you would have them do unto you but also express your outrage.

This is the successful playbook for reclaiming our country.  We are seeing it across the country in special elections and primaries where Democrats are beating the odds:  Connor Lamb.  Doug Jones.  Alexandria Ocasio-Cortez.  And there are hundreds of men and even more women and many scientists who have left their jobs to run for office in 2018 because they can see the danger and damage being done by Trump and the Republican majority.  Here are a few of these people: MJ Hegar, former military pilot and mother in Texas, Abby Finkenauer in Iowa, Dr. Matt Longjohn in Michigan, who left his job as the chief medical officer of the YMCA, is another.   They are part of a new group of very concerned, progressives running to get our country back on the right track.

These Democrats do not all share the same exact policy ideas.  They know they need to listen to their constituents.  Some districts in our country are more progressive, and others are more conservative.  There are a lot of constituent needs that are district specific.  That’s okay.  We can have a big tent.  We can work out differences with each other so long as we listen to each other and work towards a common good that embodies the Golden Rule.

I feel hopeful because despite Trump and the Republicans, but also because of them, I see a new kind of progressive Democrat emerging across the country who is winning by standing up unapologetically for what is right, expressing compassion and concern, engaging in voter therapy for this troubled nation. I am hopeful because we can come together to support families in need of compassion on a hot day in Chicago and across the country.