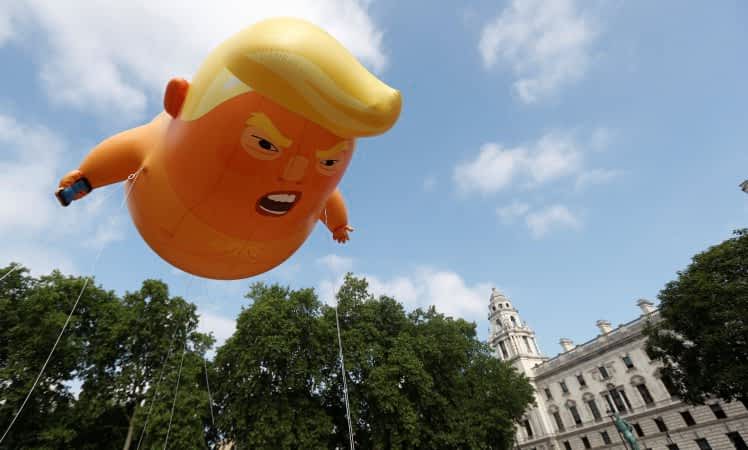 Humanity has been getting badly beaten up lately.  Trump has been assaulting our NATO allies, doing Putin’s bidding by creating uncertainty in our relationships with our European friends and furthering Putin’s goal of a new world order with Russia in ascendance.  To that end, Trump criticized Teresa May’s soft Brexit Plan in a way that may further destabilize her government and lead to her downfall.  At the end of this week, Trump and Putin will meet behind closed doors for a cozy little get together without any press, only translators.

We may never find out what they said in that meeting.  But one topic I am certain will be covered will be Russian meddling in our election.  Trump is going to tell Putin he’d like some more of that sweet sweet Russian meddling in the 2018 mid-terms.  Trump is a traitor to our country.  He is a profound threat to the United States and to the world.

July 12th was another bad day for humanity because of what happened in the House Intelligence Committee hearing with FBI agent Peter Strzok.  In a shameless display of partisanship for the benefit of Fox News viewers and Trump himself, these Republicans (remember their names because they are going to regret what they did): Louie Gohmert, Jim Johnson, Trey Gowdy and Bob Goodlatte mercilessly and unfairly attacked FBI agent Peter Strozok, who has been one of our most effective counter-intelligence agents in the FBI.  They went full McCarthy hearing on Agent Strzok.  It was ugly.  It was disgusting.  I don’t want to hear one more pundit say it was unbelievable.  Believe it.  The Republicans have dropped to a new low that is so scummy and depraved that nothing can ever get out the stink.  These thugs are attacking our most vital institutions- the FBI and DOJ that keep us safe from criminals and foreign adversaries. As Peter Strzok said so well, this hearing was “one more notch in Putin’s belt.”

Those of us who care, who believe in democracy, truth, and fairness are struggling to keep our faith here in this world turned upside down.  We are the majority in America (about 60% -70% of the electorate).  But we are being held hostage by a minority of illiberal actors who have the power in this country and are being led by Donald Trump.  Trump’s psyche is being brilliantly mocked by London’s Trump baby blimp depicting a giant, thin-skinned, angry baby with tiny hands clutching his cell phone, floating above the land, casting his menacing shadow across the world.  We in the majority are feeling stranded, threatened, and helpless.  It’s frightening in this cave we are in.  How will we ever get out?  How will we survive this?  For those of us who care about our country, it feels like we are in need of a Thailand cave rescue right about now!

It took a lot to save the Wild Boar soccer team that was stranded on a rocky perch deep inside the Tham Luang Cave over a mile underground.  It took 10,000 people helping, 2,000 soldiers, 200 divers, medical support teams, ambulances, a community of people preparing food for all the divers and other workers at the mouth of the cave. There were representatives from 100 government agencies working together to pull this off.  It took intelligence and logistics to figure out a plan that would work.  It took practicing with divers’ masks retooled to fit a child size face and fashioning a rescue stretcher (sked).  It took bravery for rescuers to climb over dangerous rocks and face rushing water as a strong as a waterfall.  It took energy to make the horizontal climbs under water in teams to get to and then bring out each person.  It also took a coach who was a Buddist monk to teach the boys how to calm themselves by meditating while waiting for help in the cave in the face of death.  Everyone worked together.  They beat long odds to make this rescue a success.

We cannot cringe in a corner in the cave.  Yes, it is frightening in here.  Yes, we can hardly breathe some days.  Yes, it is possible that what we love could die.  We yell at our TV sets.  We post our anger on Twitter and Facebook.  But the rescue mission is ours to put together along with many many others who share our faith.

There are wonderful people who are in Congress right now who share our faith, they just don’t have the leadership roles because they are Democrats and out of power.  They are on Capitol Hill right now.  They are smart and caring.  They are part of our rescue team.  People like Adam Schiff, Mark Warner, Kamala Harris, Corey Booker, Jerry Nadler, Jan Schkowsky and many others who need to be the leaders of the committees now being run into the ground by shockingly traitorous Republicans.  There are new talented people running for office that need our help to get into positions of power.  They could use your help to knock on doors in their district.  There are groups that help the disadvantaged, like asylum seekers, that need our support.  There are journalists who are speaking truth to power.  And there are people who are brave enough to fight back.  Like Peter Strzok.

We don’t have to wait around helplessly hoping to be rescued.  We can take action and participate in our own rescue.  We can extricate ourselves if we make the effort.  For us, it means registering voters, supporting good candidates, serving as election judges, helping to get out the vote, knocking on doors and making calls to push for what we believe in.  Pick a team and jump in.

It feels far better to be active than to curse the dark.  Mueller is part of the rescue team too.  But we can’t just wait for Mueller’s indictments to save us.  Although, whadda you know!  just now I see that Mueller came out with another set of grand jury indictments of 12 Russian military officers with a hint that there are more indictments to come and a warning from Rod Rosenstein that the next indictments are going to call on us as Americans to be open to the truth and less knee-jerk tribal in our thinking.  That tells me that the next indictments are likely to be the American co-conspirators who helped these Russians interfere in our 2016 election.  What I find most interesting of all in this indictment is the clear identification of the day July 27, 2016.  That was the day that Trump, from a podium on the campaign trail, called on Russia to find and then release Clinton’s emails.  The illegal hacking by the Russians occurred that very day, right after Trump issued his command.  And we all know how effective the carefully timed releases of those batches of emails damaged Clinton’s chances to win the election.

Hmm.  Things might just be looking up for humanity.