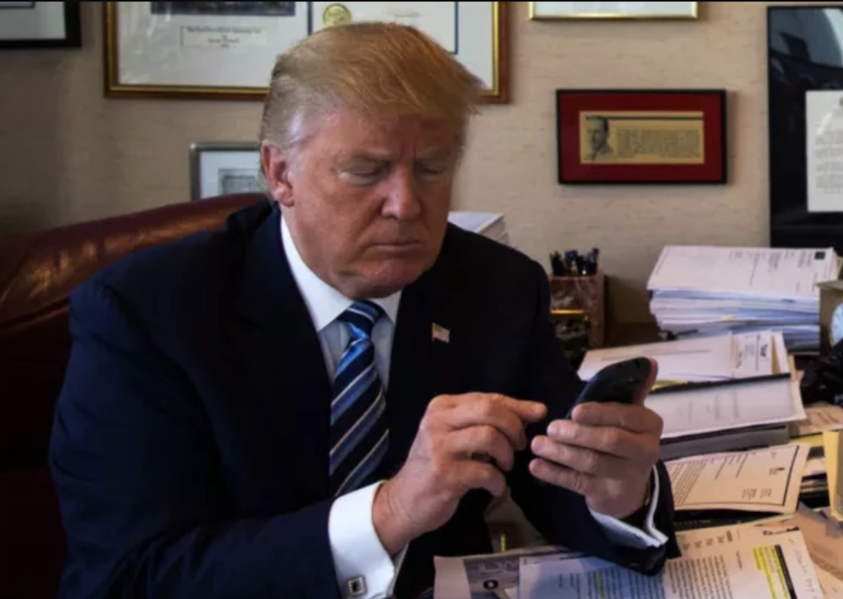 Last week I had a talk with one of my relatives who has been a huge Trump supporter since he began his campaign.  Although she has nothing to fear from immigrants, her reason for supporting Trump was that “Our country is being invaded by foreigners.”  No amount of factual information changed her mind about that mistaken idea. Believe me.  I tried.

Now that Trump has been president for a year and a half, I wanted to know if her view of him had evolved.  We exchanged pleasantries and then I asked the question I have been dying to ask her, “How are you feeling about Trump these days?”

Her answer? “I like a lot of his policies and appointments, but I really wish he would stop tweeting so much and be more presidential.” In short, her support for Trump was unwavering, but, like so many of Trump’s followers, she was bothered by his tweeting.

Many of Trump’s followers have complained about his itchy Twitter fingers.  They want him to ACT more presidential.  They want him to stop being crude and lashing out using tweets.  What they are putting their finger on is the reason Trump will eventually destroy himself.

Every person has personality traits that are baked in the cake.  Trump’s personality has been discussed at length.  The general public knows about his malignant narcissism and we can see it on display every day.  Trump thinks he knows best.  He and only he can “fix it.” As Trump gets more and more confident in the role of president, he listens less and less to people who are supposed to be there to guide him.  He is getting more and more grandiose in his narcissism.  He is like Ursula the Sea Witch from the Little Mermaid when she turned into a giant tornado-like force, filled with power and revenge, towering above the turbulent waters below.  Trump is feeling his power these day.

Trump’s personality flaws are not limited to narcissism.  He is also very oppositional and defiant in his opposition.  Like a teenager, if you tell him he should do something, his reflexive impulse will be to defiantly do the opposite of what you say.

In addition, Trump has a deep-seated paranoia.  Like Nixon, he has a profound fear that people are out to get him.  Like others with paranoia, he then creates a world where people ARE out to get him.  That is something that often happens with paranoid personality disorder.  His paranoia is laced with grievance.  “See how mistreated I/we are?”

The combination of these three personality impairments is destructively at work in many of his actions now.  For example, he is imposing tariffs on goods from China, Canada and other allies, sparking a trade war.   The Chinese have responded by imposing retaliatory tariffs specifically targeted to hurt Trump’s voter base.  Trump has long believed that imposing tariffs are the way to right the wrongs in the global trade equation because he thinks America is getting a bad deal.  Most economists disagree with that thinking and warn that these tariffs he is imposing will ripen into a trade war that will ultimately damage our economy including but not limited to: potato and soy bean farmers in the heartland, small businesses, consumers buying more expensive goods like air conditioners, larger companies that rely on a global supply chain like Harley Davidson being hurt.  Eventually the stock market will take a dive.  It takes a while to damage a big economy like the US.  But Trump is on track to do that.

Trump does not heed that warning.  Trump’s psychology is at work here.  1) Narcissism.  I alone know best.  These other economists do not know best.  2) Oppositional defiance.  They say I should do “x”?  Then I will NOT do “x”.  3) Paranoia.  They are out to get me/us.  See how all these countries mistreat us?  How unfair of them!

Here is another example.  Trump is in Europe trashing our NATO allies.  He claims that we are being mistreated (paranoid/ grievance) because NATO allies are not paying their fair share to sustain the cost of this alliance.  Generals James Mattis and Kelly are with Trump and you can actually watch them cringe as Trump, sitting at the table with our allies, arrogantly blasts Germany for being in bed with Putin because Germany buys gas and oil from Russia.  Clearly Mattis and Kelly have tried to talk with Trump about this misguided idea he has about NATO and evidently their counsel has gotten the now expected response from Trump which is to ignore what they say (oppositional defiance).  Trump knows better than anyone else. (narcissism).

Trump has removed the people who were originally installed to be his guardrails.  They were there to protect him from his worst impulses.  There is a long list of people such as Gary Cohn and Rex Tillerson who tried and failed to counsel him.  Trump cannot stand to be told what to do.  He alone knows better than anyone else.

How are his Twitter habits the clue to his demise?

When it comes to Twitter we get a raw undiluted glimpse into Trump’s psyche.  He has been told not to Tweet, but he will do the opposite because he knows best. (narcissism) He will do what he wants to do. (oppositional/defiant).  He assaults others in a crude and mean-spirited way on Twitter because he is convinced they are out to get him, so he assaults “them” back- the liberal, unfair media etc. (paranoia/grievance).  Trump’s followers understand on some unconscious level that the Trump psychology we see via his Tweeting reveals their Dear Leader’s Achilles Heel.

Why will these traits do Trump in?

As we can see on the world stage, Trump is losing us our allies.  He cannot help himself.  He is replacing our strong European, Canadian and Mexican alliances with bizarre bromances with the world’s tyrants:  Kim Jung Un and Vladimir Putin.  Those guys are not friends of the US or Trump’s true friends, but they sure know how to court a narcissist!  They are sucking up to Trump for reasons that do not benefit the U.S., but Trump is blythely unaware of their deceit.  He is remarkably naïve in large part because of his rock-hard resistance to being guided by others, to listening to anyone but himself.

We can predict the eventual end of this story even if we do not know yet when it will end.

Much of Trump’s thinking is not fact based.  It is based on Trump’s internally marinated ideas sprung from his imagined reality of what is true:  The Truth According to Trump.  To the extent he will not be guided by others who are reality-based thinkers, he will persist in the inevitable imposition of misguided rules and policies and he will ignore or get rid of anyone who tries to stop him.

Remarkably, our Senate found it’s voice and sat up straight for the first time in recent history  voting 97 to 2 to slap Trump upside the head and let NATO know we DO support that alliance and see Russia as a threat to be rejected and repulsed.  The Senate Foreign Relations Committee is also going to issue a resolution supporting NATO.  Trump may back down a bit in the face of that unified congressional message.  But it will not last.  His destructive psychology is baked in the cake.

I am torn.  I want my country to be successful.  But until American voters finally feel the pain of tariffs, the loss of their health care, and understand how the viciousness of a man without empathy will create harmful policies, it will delay the inevitable realization that Trump was not the populist hero they thought he was.

For that reason, I am willing to look on the bright side when Trump tweets and imposes idiotic tariffs and cuddles up with Putin and does a multitude of horrible and stupid things.  No pain no gain.  To finally get rid of Trump and Trumpism, average Americans must get hurt and must learn to vote in every single election.