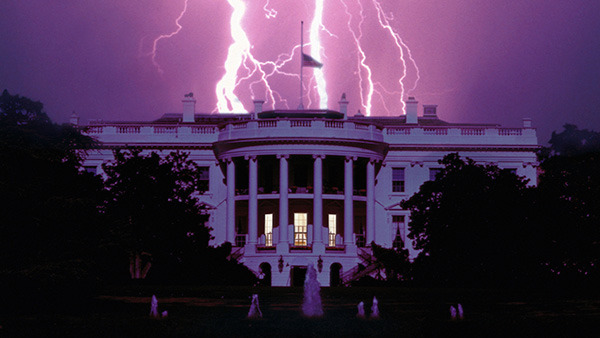 Bob Woodward’s new book, Fear, is coming out on September 11.  Perfect day for a book about Trump and fear.  You cannot buy it yet, but everyone is talking about it because everyone knows how cognitively damaged Trump is but no one wants to do anything about it.  We have heard that John Dowd, Trump’s former lawyer, told Mueller that Trump could not meet with him for an interview because Trump is hopelessly incapable of telling the truth.  In January, Dowd and his team did a test run mock interview with Dowd asking Trump questions as if he was being questioned by Mueller.  Trump failed.  He was not able to keep from lying.  Even after it was clear that Trump was not capable of testifying truthfully, Trump claimed- “I’ll be a good witness!”  To which Dowd replied, “No, you’ll end up in an orange jumpsuit.”

Dowd met with Mueller in person in March to explain the problem.  Part of the problem, Dowd revealed, is that if Trump comes in for an interview with Mueller and perjures himself, the transcript will get out and everyone including our nation’s enemies will have a deeper knowledge about how vulnerable we are in this country with this demented president.  Mueller’s response was, “I understand.”  And then Dowd quit, leaving the scene like almost all the other people who started out as guardrails on this truly crazy president.

We also heard that Gary Cohn, who has also left the White House, snatched papers off Trump’s desk in the Oval Office before he could sign them.  Cohn did it to protect our country and he also said that Trump would not even realize these papers were missing or that he had not signed them.  Trump is that out of it.  Who the hell is running this country?? (More on that later.)

We heard that General Mattis thinks Trump has the mental capacity of a 5th or 6th grader.  Trump also routinely insults people like Jeff Sessions, and according to what we hear in the coming book, Trump’s staff talks smack about him too, behind his back.  Their insults have to do with his mental condition.  He is an idiot.

At one point, Trump got the bright idea that our military should murder Assad and said so to General Kelly.  Kelly told Trump he would get right on it.  While Kelly pretended to agree with Trump, he told the aides that that assassination would not be happening.

Kelly was the one who used the term “Crazytown” to describe the Trump White House.  What is crazy is not only Trump himself but all the Trump “minders” who are keeping Trump’s growing dementia under wraps when they should be invoking the 25th Amendment.  It is just a matter of time before something gets beyond the control of Trump’s minders and we all regret failing to remove this guy from office.

The anonymous op-ed in the NYT written by a senior official in the Trump White House confirms much of what we learn from Woodward.  He or she writes about a “quiet resistance within the administration of people choosing to put country first.”  The writer confirms how terribly mentally impaired Trump really is.  “Meetings with him veer off topic and off the rails, he engages in repetitive rants, and his impulsiveness results in half-baked, ill-informed and occasionally reckless decisions that have to be walked back.”  Hey!! This is not OK!!.  This is evidence of dementia and cognitive impairment.  And the so-called “quiet resistance in the White House” is NOT putting country first.  It is time to get Trump evaluated for dementia.  His father had it and it is likely he has it too.  Americans did not elect the “quiet resistance in the White House” to run our country.  Trump was elected and he is thoroughly incompetent to be our president.  He is unfit and he needs to go.

In fact we really need to get rid of ALL Republicans in Congress to whatever extent possible.  They are placing all of us in harm’s way and they know it.  These people are complicit.

If you needed any more evidence of their complicity, I give you exhibit A- the Kavanaugh hearing.  These hearings are a travesty.  They are another manifestation of Crazytown.  I was glad to see Democratic Senators Kamala Harris, Dick Durbin, Sheldon Whitehouse, Cory Booker, Chris Coons, Diane Feinstein, Patrick Leahy and others speak out in a concerted effort at the start of the hearing about what the Republicans are trying to get away with.  But Chuck Grassley and the Republicans should be ashamed of themselves.  They are jamming Kavanaugh down our throats by trying to rush him onto the Supreme Court, probably fearing that Mueller’s report will come out any minute and the people will rise up to demand this president be impeached.  Getting Kavanaugh on the Supreme Court is the moment big corporate interests, donors and Evangelicals have been waiting for and salivating about- getting a right-wing justice on the Supreme Court to end Roe v Wade by hollowing it out, ending Affordable Care and keeping the 1% and corporate interests in power by winning case after case before a right-wing, illiberal Supreme Court.  Even more concerning is Kavanaugh’s expansive view of the power of the president and his belief that a sitting president should not be bothered by investigations or responses to subpoenas.  The president is too busy for that.  I think we can all agree that this president would be way too busy playing golf and trying to ferret out the snitch in the White House to be expected to respond to a subpoena.

Republicans are blocking and tackling everything the Dems are asking for when it comes to getting information about Kavanaugh.  It is a cynical ploy.  And because they have all the power, they can do it. The Democrats are making legitimate requests:  they want access to more than the mere 10% of Kavanaugh’s writings from his time in the White House that have been made available for review.  They also want time to read the material.  What’s the rush? They want to know why a Republican by the name of Bill Burck, a former Bush lawyer, was solely in charge of reviewing all the documents and weeding them out without keeping a record of what was deep-sixed.  It is likely materials were weeded out and kept under wraps because of something the Republicans are trying to hide from us.  What are they trying to hide?

Kavanaugh worked in the Bush White House as White House counsel when major decisions were being made- like whether to use torture in interrogation after 9/11.  But there were other big decisions that Kavanaugh surely weighed in on.  We are not being allowed to know what Burck and the Republicans are keeping under wraps.  Our democratic senators even resorted to making a FOIA request for documents (which has never been done before because it was never needed before) after their requests for documents were rebuffed by the Republicans under the guise of presidential privilege.  What do Republicans know about Kavanaugh that they do not want us to know?

Kavanaugh’s hearing began with protest.  The Democratic Senators spoke up and demanded that they get the closeted confidential documents and requested an adjournment under the rules governing these hearings so that they could read the documents.  Senator Grassley is running this hearing he rebuffed every request made by the Democrats.

There were and continue to be protesters in the gallery and outside as well.  Every few minutes someone shouts out or yells out and gets forcibly removed from the gallery.  There were some 70 arrests on the first day of the hearings.  Some protesters were dressed as Handmaidens (a reference to the Handmaid’s Tale by Margaret Atwood about a future where women are forced to bear children or procreate without control over their own bodies) to bring attention to the fact that Kavanaugh was hand-picked by the Federalist Society, specifically  chosen because he will overturn Roe v. Wade along with the other male Catholic judges already on the Supreme Court who are eager to kill off Roe v. Wade and take away a woman’s right to make decisions about her own body.  We already know the way they will do it will be to keep Roe on the books, saying it is “settled law”, but hollow it out by not overturning legislation that creates excessive restrictions on the right to an abortion, essentially killing Roe v. Wade while pretending they have not.

It is not yet a done deal that Kavanaugh gets the 50 votes he needs to sit on the Supreme Court.  But if Republicans do get their 50 votes for Kavanaugh from this bunch of compromised Senators, they need to have hell to pay.

If they thought they should be worried about a Blue Wave, how about a Blue Tsunami?  We are seeing the energy of an agitated electorate gaining greater awareness of the danger this president poses for all of us and the complicity of this administration.  We see this energy in progressive wins across the country.  Yesterday, in Massachusetts a progressive a black woman by the name of Ayanna Pressley, won the primary in her district beating a ten-time incumbent, a white male, by the name of Michael Capuano, who was not a bad guy but stood for the old guard.  Capuano had more money and the polling predicted he would win.  But “The Force” was with Pressley who will become the first black American woman to win a House primary in Massachusetts.  Since there is no Republican contender to challenge her, she will take her seat in the House of Representatives after the midterms.

Progressive America is hungry for new younger activist leaders who look more like the population we see and engage with in cities where the majority of us live and work.   Were it not for the Electoral College system tipping the scale too far in favor of the heartland voter who lives in the countryside or what is left of the frontier; if we had true majority rule, our country would not be facing this serious problem.

Instead we got Trump.  Who is, let’s face it, nuts.  We are in Crazytown along with this damaged man.

We need to rise up and speak out.  This president must be evaluated  by a REAL physician who specializes in geriatric neuropsychological cognitive impairment.  He needs to be evaluated for dementia.  If he is unfit to be president then we all need to insist that the 25th Amendment be invoked.   We have a right to live in this country without being in fear of our own president.