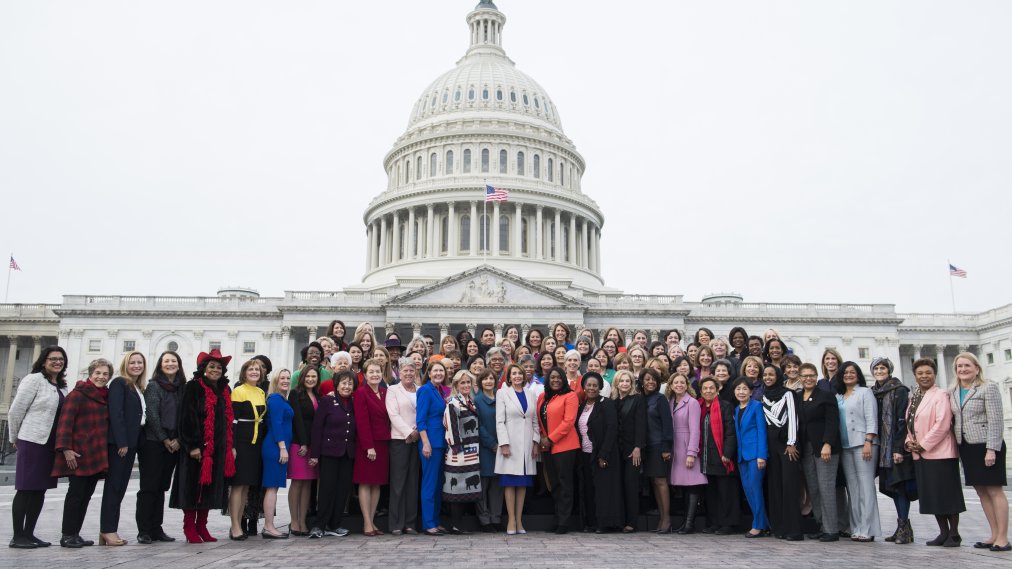 Let’s just pause for a minute and take time to revel in the fact that we got our House back.  It’s back and better than before.  It is finally looking more like the diverse America we are.  More than 100 women have joined the House.  52 African Americans are Representatives.  39 Hispanics. 2 Muslim women. A woman from Minnesota who came to the United States after being in a Somalian refugee camp.  4 LGBTQ Representatives.  2 Native Americans.  And 10 new scientists.

This is the most diverse House in history.  Led by a remarkable woman, Nancy Pelosi, who has broken the glass ceiling twice, becoming speaker of the House for a second time, a woman who led the fight to pass landmark legislation in the past: the Affordable Care Act, Dodd-Frank, and the rejection of Don’t Ask Don’t Tell in the military.  Pelosi has 5 children and 9 grandchildren.  The most moving part of the swearing in ceremony came when she invited all the children in the House, who were there to see their parents sworn in, to come up to the podium for that memorable experience.  They all came up to join her as she beamed her approval and happiness: every skin color -black, brown, white.

Meanwhile, Trump, babyish as ever, unable to allow the Democrats any air time without upstaging them, suddenly decided to have his own photo op and called for an impromptu press conference.  In it he surrounded himself with border patrol guards, a bunch of middle aged bald white men who, tough and unsmiling, seemed to be scanning the audience for ruffians, like bouncers at a bar.  In Trump’s photo op he was trying to reinforce the idea of strength and power and remind everyone of the existential threat of the border being overrun by Mexicans and terrorists and things that go bump in the night.

What struck me was the contrast between that image of Pelosi, a welcoming mother figure, surrounded by the next generation of children of all colors and backgrounds- and the image of Trump, a kooky old white man terrified of the future and overreacting to the inevitable change coming to our country.

This is the existential fight we are in now.

It is not really the border wall funding that is the underlying impetus for the fight between Pelosi and Trump, but the existential threat that uninformed older white Americans are having with an inevitable future they fear.  This fear juiced Trump’s campaign from the start.  And it is what Trump now clings to as his own paper thin wall against the future coming for him.  Trump has nothing left if this last “Alamo stand” wall idea fails.  He has to keep hoping that his base will be there for him if he fights for “the wall”, which is really Trump fighting to keep America white as a last defense against the inevitable browning of America.  At this point only 25% of Americans support shutting down government to get a border wall.  That is not a good number for Trump.  And it is going to shrink as the pain sets in for more Americans over the Trump shutdown.

The reason Trump has nothing but the metaphorical wall left in his bag of tricks is that so much of what he has damaged in his first two years of office is catching up with him.

The stock market is reacting negatively to the destructive trade war Trump ignited.  Tim Cook at Apple is annoyed about how Trump’s trade war has hurt his company (their sales are down 10%) and said so, which dealt another blow to the stock market that was already having a heart attack. Apple is not the only company doing business with China.  A lot of American companies are hurting.  All of these companies are having to pass along the additional tariff cost to the American consumers.  Not to mention soy bean farmers who no longer have a crop they can sell to China. Their soybean crop is worthless.  Trump’s trade war is a disaster.  Even if the stock market rises as well as falls in coming weeks or months, there looks to be longterm trouble ahead for the economy.

The tax cut for the rich is another disaster.  Our country is loaded down with 22 trillion dollars of debt as a result of that bill that gave the wealthy more money and corporations a huge break which they used to buy back their own stocks rather than raise the wages of their workers.  Where is the money we need to help the next generation?

Trump faces 17 investigations and court cases over his improprieties and criminal conduct.  They are ripening.  And that is before the House committees even start their investigations.  Of course this is another reason he feels compelled to play to his base with the wall idea.  If he is impeached by the House, he is hoping to keep his base by his side and that includes the votes of Senate Republicans who will protect him from expulsion.

Trump is generally seen as toxic by most sane Americans.  Some polls show a 60% approval of impeachment of Trump by Americans at this point.  He has a lot of “acting” members of his cabinet because he cannot get the first or even second string players anymore.  He is stuck with the third rate or fourth rate players who would not be easy to get through a Senate confirmation hearing because they have issues.

Trump has denied climate change despite the clear indicators and the inevitability of more damage and destruction.

This is the reality our country is stuck with.  On one side, we have a president who is a tantruming baby, insisting on a fictional wall that is supposed to save himself and his fearful followers.  On the other side, we have the newly elected most diverse House of Representatives in history under the leadership of Nancy Pelosi, that is ready to go forward and help our country move into the future.

It was a great relief to have a grown up leading the House at last.

I feel hopeful about the direction our country can go once we get rid of Trump who is like that gunk you get in your pipes that clogs up the plumbing system, causing the water to back up in the sink and the toilet.  He and his cult45 followers are that gunk that is preventing our progress.  Only a small amount of change can happen as long as he is in the role of president.  Congress passed a bill that improves our criminal justice system.  Yay.  Maybe Kushner and Trump are willing to let that bill through because they have some inkling that they are going to end up in that criminal justice system after all the illegal stuff they have done.

The good news it that there is a new day dawning.

Pelosi is a savvy strategist.  What is her strategy to re-open the government?  Last night the House passed a bill to re-open the government.  The ball is now in Mitch McConnell’s court.  She is putting mega pressure on Mitch McConnell and all of the Republicans by having the House pass the exact same legislation the Senate passed two weeks ago by 100% affirmative voice vote without any “nays”.  It was all going down just fine two weeks ago until Trump got his marching orders from right-wing commentators, Rush Limbaugh, and Ann Coulter, that he must not give in on having a 5 billion dollar temper tantrum over a border wall.  These entertainment industry commentators are not our elected officials.  We should not be led by them.   But Trump is.  So here we are- in a fantasy fight over a wall that will never be built that will make Trump feel more powerful and safe if he can get this concession in the face of his administration unraveling at a rapid rate.

The Dems have no reason to appease him and I do not see them crying “Uncle” first.  They were just elected overwhelmingly to act as a check on the baby in the White House and they are not going to give in to help Trump have a big win with his base and with conservative commentators to keep him from being expelled if he is impeached.  As the Dems push back, there will be more Republican Senators who are likely to cave because they will realize this fight is going to destroy their chances to be re-elected.  Note that Senators Cory Gardner and Susan Collins are already siding with the Dems.  I expect more to do that as the shut down continues.  Pelosi is playing her hand and she knows how to do that but I look forward to the day when we can move forward with the many pressing things our country needs to do to repair the damage from Trump and set ourselves up for a better future for all Americans.  That time is coming, but not fast enough for me.

My go to fantasy is that Pence and Trump (and Trump’s crime family) are all indicted and/ or impeached and leave office in orange jump suits.

And President Nancy Pelosi has a nice ring to it.

If you enjoy reading the Markin Report, please share it with friends who would like to read it too.  Thanks so much! – Sheila Markin Nielsen