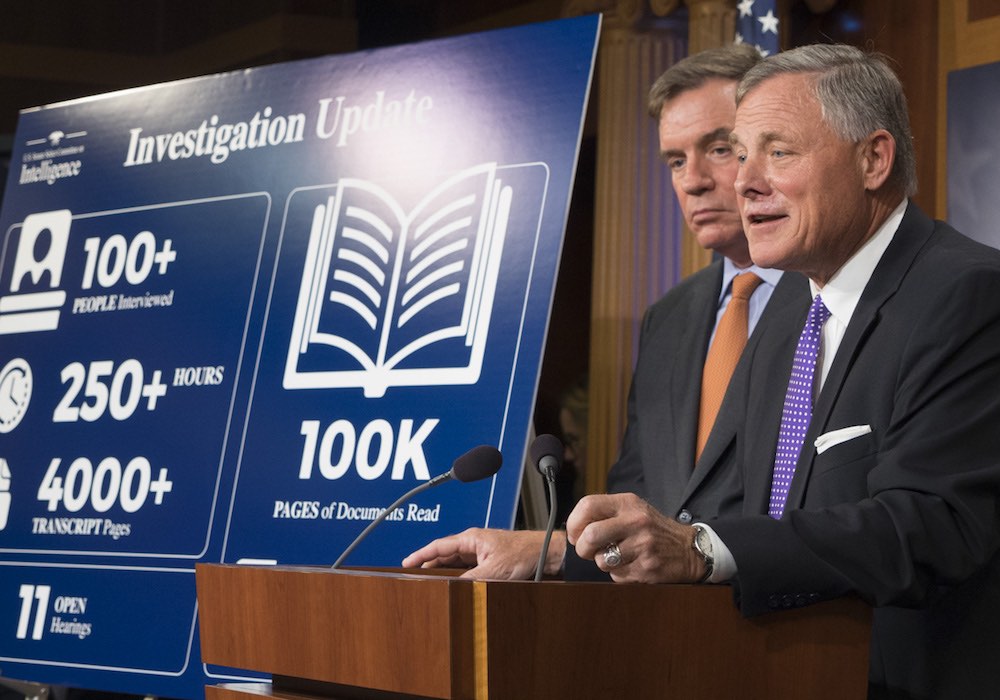 The Senate Intel Committee is winding down its investigation into the Russian interference in our presidential election, and Senator Burr came out with a statement that brought joy to Trump and his band of weasles.  Burr said there is no direct evidence of a conspiracy between Trump and Russia.  Trump is going to gloat now.  He’s going to triumphantly shriek all over his Twitter feed: “SEE, I TOLD YOU THERE WAS NO COLLUSION!”

He knows better.  There was collusion.  The question is whether there is a provable conspiracy beyond a reasonable doubt.  And the key word from the Senate Intel Committee is the word “direct”.

We need to unpack what Burr’s statement tells us in light of what we know about Trump and the Russians working to get him elected in 2016.  And the first thing we need to understand is the difference between direct evidence and circumstantial evidence and how criminal conspiracies usually get proven in courts of law.

Direct evidence is not inferred. Direct evidence could be eyewitness assertion of actual knowledge, for example, someone in the room attests to the conversation he heard or what he saw when he was there or there is a taped conversation in which the subject or target makes an incriminating statement and he was taped.  Prosecutors prove cases beyond a reasonable doubt every day of the week without that smoking gun direct evidence.  It’s great if you have it.  But you don’t always have it.

When people set out to do bad things, they don’t take out an ad in the paper or broadcast their intentions or make sure everyone knows all about it by talking about it to people outside the conspiracy.  No. Just the opposite.  They do everything they can to keep it secret, hide it, keep everyone from finding out about it and maintain a code of secrecy with each other.

Mueller’s team is trying to peel back the skin of the onion to find out the truth of what happened with the Trump campaign and the Russians.   Everything the Mueller team is doing is under wraps with no leaking.  If there is any direct evidence of a Trump- Russia conspiracy they DO know about, they would not want that knowledge to be revealed.  They would prefer that the conspirators feel free to talk about how relieved they are that they got away with their plot.

For example, as a criminal prosecutor working at the US Attorney’s Office in Chicago, I had a vote fraud case where the judge of election paid young girls to fill out voter ballots for dead people and winos.  The way we made that case was by using a witness who wore a wire, who met up with that judge of election after the election was over and got him on tape bragging about what he had gotten away with in his precinct. Direct evidence.  Smoking gun.  Game over. He pleaded guilty and turned into a cooperating witness.

When it comes to the Trump/Russia connection, we in the public already know a lot of facts from which we can draw accurate inferences.  We know Russia was out to hurt Clinton.  There was an active troll farm in Russia engaged in trying to spread misinformation and both anger voters and suppress the vote for Clinton by weaponizing Facebook and other sources of information.  We already know that Russians came to the United States to rile up voters and foment anti-Hillary animus even going so far as to have an American dress up as Hillary Clinton in a prison jump suit and ride around in a “prison” cage on the back of a pick-up truck. We already know that there was a cyber-attack on the Dems by the Russian GRU.  We know this from Mueller’s prior indictments of these Russian teams that were clearly working to get Trump elected.

We know there was a meeting at Trump Tower in which Trump Jr. essentially said – if you got dirt on Hillary, we love it, bring it on.  There was a clear wish to engage with the Russians in their efforts to damage Clinton.

We know that the Russians DID bring it on after that by taking the hacked materials from Wikileaks and Gussifer 2.0 (both Russian linked entities), and “bombing” the Clinton campaign at strategic moments to help Trump and hurt Clinton.  We know that Trump mirrored, echoed and mimicked Russian wording in his speeches.  We know that Trump created a phony script for his son, Don Jr., to get people thinking the topic was adoptions not sanctions in the Trump Tower meeting with Russians.

We know that the wording of the Republican platform was altered to help Russian interests with respect to the Ukraine.  We know Mike Flynn was in a big hurry to end US sanctions on Russia as his first order of business once Trump had won the election and tried to cover that up even lying to the FBI which he had to know he did at great risk to himself. We are beginning to see more connections between the NRA and Russian interests thanks to Maria Butina’s cooperation and the indictment of her American boyfriend, Paul Erickson.  We are going to learn more about that in the coming months.  We do not yet know if there is interconnection between that case and the Trump/Russian activities in the run up to the 2016 election.

But one thing is certain.  Above all else we have seen everyone in the Trump orbit lie and lie and lie some more.  There were over 100 meetings between Trump campaign members and Russians.

If there’s nothing to hide, why do they lie?

Most of this information is known to us by way of reporters and Mueller’s indictments.  But we do not know everything Mueller knows.

And neither does the Senate Intel Committee.  It is true that they have access to classified information, but they do not know everything known to Mueller.

What WE in the public can see is a pattern of behavior and activity that people have called “smoke”.  Circumstantial cases are built out of this so-called smoke.

The Washington Post has a recent piece that helps us peek behind the curtain of the Mueller probe just a little.  In this reporting we learn that there was more than one clandestine meeting between Manafort and Kilimnik, the Russian spy connected to the GRU and Deripaska in the Grand Havana Room near the Trump Tower campaign HQ.  We also know that in one of the meetings polling data was provided by Manafort to Kilimnik.

Why does anyone care about polling data?

Because it would have been useful to identify the districts particularly in key Midwestern states that would have helped to weaponize and target the social media efforts of the Russian troll farm.   One of the meetings at the Havana Room cigar bar was on August 2nd 2016, which was an inflection point in time as the Trump campaign intensified its efforts to win the election after the nomination.  Rick Gates was present for part of that meeting between Manafort and Kilimnik.  Notably the three men left the meeting using three separate exits. (Interesting circumstantial evidence of a plan to keep this meeting secret and intent- knowing what they were doing was wrong).

In a courtroom conversation between Mueller’s lead prosecutor, Andrew Weissmann, and Judge Amy Berman Jackson, Weissmann said that one of the special counsel’s main tasks is to examine contacts between Americans and Russians during the 2016 race and determine whether Trump associates conspired with the Russians. Weissmann told the judge, “That meeting- and what happened at that meeting- is of significance to the special counsel.” In other words, Mueller is still building a case for conspiracy.

Since Gates was present for part of that conversation between Manafort and Kilimnik, Gates might be able to provide direct evidence of a Trump/ Russia conspiracy since he is cooperating.  We do not yet know if he was party to a conversation that could provide direct evidence, but that may well have been the case.  The evidence of conspiracy is building even though Trump and his  enablers are doing whatever they can to thwart the efforts of our FBI to get at the truth.

A conspiracy is a secret plan by two or more people to commit a crime with the mens rea (criminal intent) and at least one overt act in furtherance of the crime.

We should not be surprised that the Senate Intel Committee did not find DIRECT evidence of a conspiracy.  They are not in a position to know the most sensitive evidence. And if I were a betting person, I’d bet that the FBI is withholding its most sensitive information from Congress, because Republicans will leak everything they learn to the White House to get on Trump’s good side, a la Devin Nunes.

It is no surprise that Burr found no direct evidence of conspiracy.  But if Mueller’s team does not find evidence of a Trump/ Russia conspiracy in reliance on strong circumstantial evidence and possibly even direct evidence by the end of this probe, THAT is when we should be surprised and skeptical.