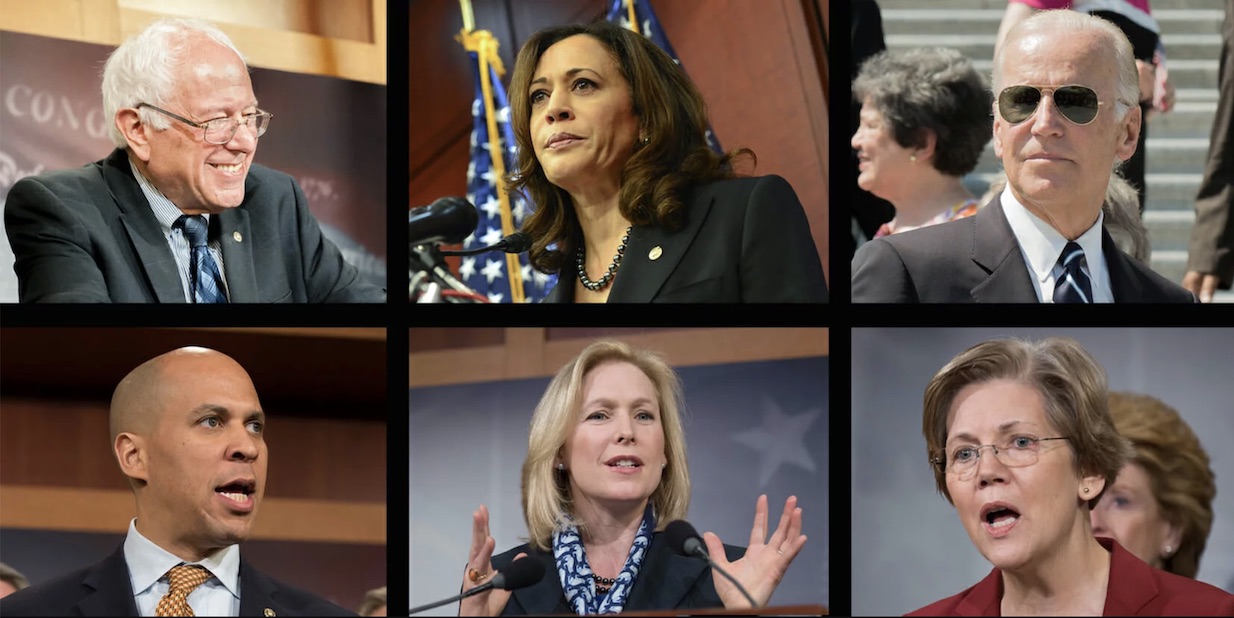 There are currently 15 people running for president with the hope of being chosen as the leader of the Democratic Party.  They include Sen. Elizabeth Warren, Sen. Kamala Harris, Sen. Cory Booker, Sen. Kirsten Gillibrand, Sen. Amy Klobuchar, Gov. Jay Inslee, former Representative Beto O’Rourke, Gov. John Hickenlooper, Mayor Pete Buttigieg, Sen. Bernie Sanders and more. In the wings are former VP Joe Biden, Rep. Eric Swalwell, and maybe Gov. Steve Bullock and others.  Some people are running I have never even heard of like Andrew Yang who favors universal base income grants and Marianne Williamson, advisor to Oprah who wants to ignite a moral awakening in our country.  What a list of contenders!! On the Democratic side, there is an embarrassment of riches with many excellent candidates running for president.  Why?  Because Trump is not only beatable but he NEEDS to be beaten.

If you talk with Democrats across the country you will hear one refrain: they might favor this candidate or that one, but what they want above all is someone who can BEAT TRUMP.  Full stop.

On March 11th I went to an interesting lunch in Chicago where those of us who were invited, got to hear from two prominent Democratic strategists about how the Democratic Party is thinking about and planning for the 2020 presidential election.

One of the speakers at the lunch had helped Obama to win the White House.  After Trump was elected he had been working on campaigns in other countries, helping candidates to win elections in Europe.  But he had a conversation with someone in Europe that deeply affected his thinking and his plans.  This European said to him, why are you over here in Europe when the most important election for our world is going to take place in the United States in 2020?  He realized that he needed to return to our country to help in whatever way he could to insure that the Dems win the presidency in 2020.

One of the speakers said something important that I will never forget, namely that Americans don’t think much about politics.  At all.  They only spend 4 minutes a week thinking about politics.  Yet this next election is the most important election in our lifetimes not only for our country but for the world.

More important than who wins the primary for president on the Dem side, is that that person, whoever he or she may be, is fully armed for battle against what will be a formidable Trump/GOP assault.

Could Trump win again?  The consensus was that, yes, he could.  Trump has absolute, undying support from his cult-like followers and he has won over some Republicans and Evangelicals who might have been uncertain before but like him now.  A recent poll shows Evangelical support for Trump at over 60%.  The Republican Party has lost market share, but those who are still willing to call themselves Republican are extraordinarily loyal to Trump.  When remaining Republicans are asked what they think about Trump, his supporters have written off his character as an issue of concern to them.  They accept his character with all of its flaws because they think he is on their side and that the economy is good because of him.  Hillary made the mistake of focusing on Trump’s character but learned that was not a winning playbook.  If Trump threads the needle in the Midwest as he did in 2016 with Pennsylvania, Wisconsin and Michigan with those crucial votes that won the Electoral College, Trump could win again.

I don’t think I misread the reaction of those of us around the table when we heard that pronouncement.  We were visibly concerned.  We wanted to know what the Dems are going to do to win in 2020.

Here is what we learned.

Part of the plan will focus on winning back the blue collar voters in the Midwest with clear messaging and a far more interactive campaign in which the candidate, whoever it may be, shows up in person across every key state and engages with the voters.  The important information for these Midwest voters in particular will be 1)  Trump is not really helping you, and 2) The economy is not as good for you as you are being led to believe.  Trump’s character defects will not be front and center.  The focus will be the same as it was in the midterms.  That approach created the blue wave and flipped the House.  The key will be to address kitchen table issues that affect the lives of voters.  That includes health care and the tax bill that was passed that helped the 1% and corporations but not the farmer or the little guy, and the failure of the trade war that has hurt many farmers and small businesses.  There will be different messages for different voting blocks.  Millennials care deeply about gun control and legislation to combat climate change, for example.  Messages will target local issues and concerns based on the demographics.

Part of the plan is also to keep attacking Trump every day and not let his actions, his bad policies and his lies go unanswered or unreported.

There was some concern voiced around the table about the number of candidates running for president.  Was that a problem?

Both of the speakers thought that a large field is actually a good way for Democratic candidates to hone their skills to get ready for what will be a knock down drag out fight against Trump.  Yes, the Dems will have a food fight and people will get dirtied up, but ultimately, what will emerge will be a seasoned campaigner.  Trump, for his part, will be armed with Russian social media support and his rabid base.  But the speakers thought that the general electorate will be looking for the polar opposite of Trump in 2020.  They will be looking for the “anti-Trump”, whoever that may be.  They will want to “fight fire with water”, although they will also be looking for a candidate that is both inspirational and a unifier.

In other words, the Democrats in the smoke filled back rooms are not going to put their thumb on the scales to help someone win.  Instead, it will be a winnowing process and the voters will decide who they want.

Some of us were concerned about the rampant cynicism in the electorate.  If voters are skeptical, will they turn out?  What will combat cynicism?

The response we heard was that the candidate who is inspirational and able to cut through the noise and be convincingly authentic, will help voters to have faith again.  We saw that with Stacey Abrams, Andrew Gillum, and Beto O’Rourke in the midterms. Even though they lost, they came remarkably close in red meat Republican states because of who they are.  That is why we definitely need an inspirational candidate with a unifying message.

These two speakers left us with a positive prediction.

If you think Trump will win in 2020 you have to ignore or discount 2018.  Women and men rose up in the suburbs, former Republican strongholds, black women rose up and Millennials rose up to create and support a tsunami that swept Republicans out of the House.  That was not a one off.  The Democratic/ Independent voting bloc is significantly larger than Trump’s dwindling core group of voters, but the majority (representing about 60% of the electorate) has to get to the polls and vote.  Turn out is going to be the key.

Based on what I heard, the Dems have learned from the successful playbook of 2018.  They are not underestimating Trump this time. They are going to let the primaries play out (no thumb on the scale) and let the best man or woman win and then fully support that person whoever it is.  And they are building that support starting NOW.  I will be writing more about how we can support this effort to beat Trump through a number of well-positioned groups that need our help to keep fighting the good fight in the run up to 2020.