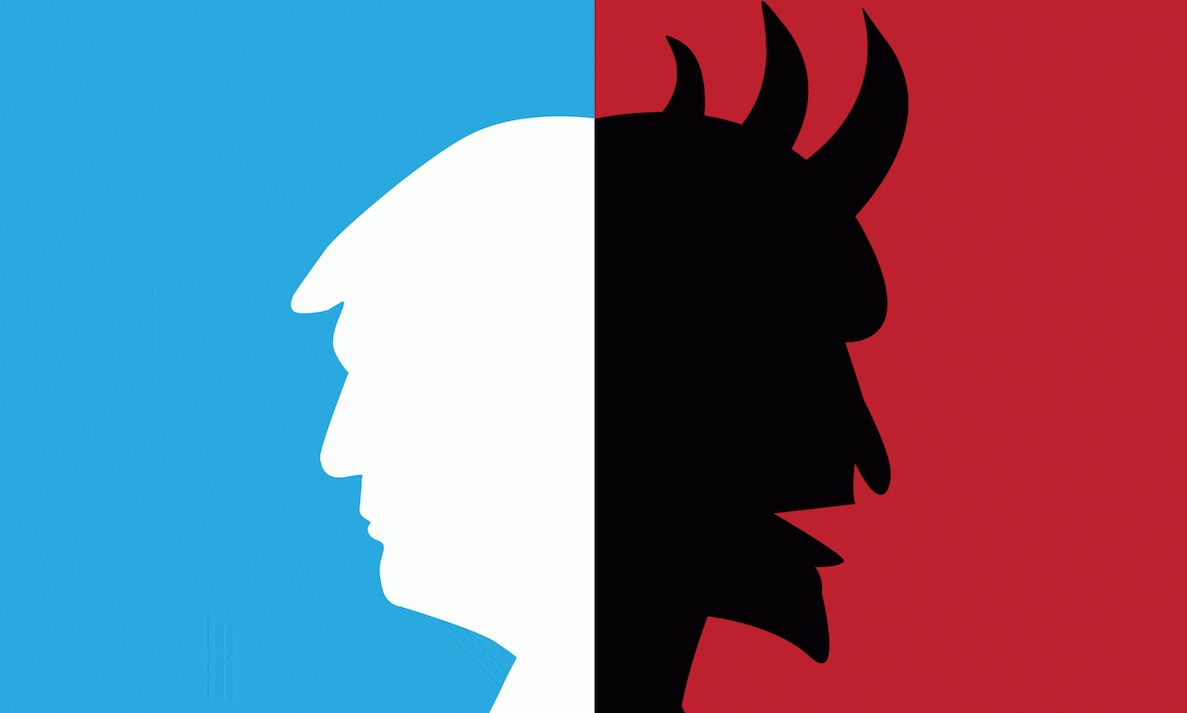 Rick Wilson’s new book, Running Against the Devil, is the must read playbook for Dems to beat Trump in 2020. Wilson is one of the street fighting Republican strategists who defeated Hillary Clinton and helped Trump win. He has metamorphosized into a former Republican and his book is a tell all expose of the way Republicans think and plot for political success. As Wilson puts it so well he has joined the fight to oust Trump because Trump is an “existential threat to American values, institutions, the Constitution, our system of government, our security and the rule of law, and you know the little stuff like the future of humanity.”  Part of the fun you will have reading this book is Wilson’s sense of humor.  It is gallows humor because throughout the book there is a powerful message he repeats over and over again- Trump is dangerous to all we hold dear and the future of our country depends on Democrats getting this right and not messing this one up.

Wilson gets the power of messaging and he also gets dirty politics, since he clearly practiced the dark arts himself.  That’s how he helped people win on the Republican side before he jumped ship.  Wilson is just the kind of fighter you want to have on YOUR side when you are running against the devil.  Wilson succinctly summarizes Trump’s message as: Wall. MAGA. Judges. Socialism. Revenge.  “The message was cultish, racist, and blisteringly stupid.” And come to think of it, yep, that’s almost the whole message from Team Trump which they hammered home across multiple platforms and will do again as they ramp up for 2020.  It was “simple, constant and repeated.”

The Democrats, Wilson tells us, “lost because you made the election into a referendum on policy, not Trump.”  The Democrats “stubbornly refused to understand that many of their boutique policies repel the Walmart voters they must absolutely win in states that are not deep blue.”  This is a central message in Wilson’s book.

It would be good to incorporate this thinking to win in 2020.

Here are the key take aways:

What can you do? Try this:

Rick Wilson’s playbook is the road to success in 2020.   If we lose this election we lose our democracy.   WE CANNOT FAIL.

I hope you will read Rick Wilson’s book and tell everyone you know to read it too. Then think clearly about those strong rising candidates who are more centrist and acceptable in a general election: Klobuchar, Buttegieg, Bloomberg.  Especially Bloomberg.

Take a look at Bloomberg. Why?

1. Former Republicans who have left the Republican Party in droves but are open to a centrist candidate would vote for him without hesitation and he has the bonafides when it comes to progressive issues like climate change and gun control not to mention he ran a very large city and did it well by most accounts.

2. He would restore democracy, the rule of law and sanity in our country and around the world after Trump’s extensive damage.

3. Listen to his answer when it comes to stop and frisk.  Learn about the mayor training school he created, the Academy for African American boys, the Harlem Children’s Center, his position on health care and other progressive initiatives.

4. The black community is listening to him and he is rising in the polls with that crucial part of the Democratic electorate as Biden’s lead with black voters ebbs.

5. He has the money to go the distance against Trump’s massive war chest that has only increased since he was “exonerated” by the Senate.  Bloomberg is already creating an effective digital fighting force to thwart Trump’s powerhouse data analytics team that is spreading disinformation across multiple platforms and repeating lies over and over again.  Once there is a nominee that Trump digital war machine will be spewing hate, venom and lies about whoever the nominee might be.

6. Bloomberg is already fighting Trump punch for punch (something Wilson says to do) far better than anyone else is and has hired a team of meme creators and will be using humor to get across his message.  I don’t know why other candidates have not done this yet because this is the way to win against Trump: shot for shot fight back and hit him personally for being a liar and for his fake tan, his fake success in real estate, lying about his weight to have a better BMI, and don’t ever not respond to an assault.

7. In the latest Quinnipiac Poll Bloomberg leads all other Dems as having the best chance to beat Trump at 51% to 42%.  Other Dems are close, but this is just the start, so we will see.

8. When I am feeling worried about which Dem nominee can beat Trump, I imagine Bloomberg with Amy Klobuchar as his running mate, Kamala Harris as the next AG, Biden as our Secretary of State (all those relationships with foreign leaders!), or maybe Pete Buttegieg, Cory Booker as head of HUD, Elizabeth Warren in charge of consumer affairs, and Barack Obama as the next Supreme Court appointment.  Are you feeling calmer now?  I am.  I think Bloomberg could get us the election win we must have which sets up the rest of those potentials.

9. If it bothers you that he is a billionaire, remember that he is a successful billionaire, unlike Trump who is a con artist and failed real estate mogul turned money launderer for Russian oligarchs.  Because of Citizen’s United our country needs to have a nominee who can cough up huge sums of money to have a viable campaign.  We have to get rid of Citizen’s United but we are still stuck with it right now.  All of the other Dem candidates, cannot match Trump as effectively when it comes to hiring stellar talent to put together everything from ad campaigns to  effective digital war operations to on-the-ground get out the vote teams.

10. Most of the other candidates are going to run low on funding (Klobuchar just got an influx of funds but she and Biden are running low) as the primaries drag on.  Only Bloomberg has the luxury of spending astronomically to defeat Trump, who is an incumbent money generating powerhouse who is willing to be openly corrupt and disperse a lot of prizes to donors in exchange for financial support.

11. And if it bothers you that Bloomberg is so wealthy that he can pay for all his expenses to run his campaign, just remember that also means he could take office without being beholden to anyone.

Despite what it might seem, I am not totally wedded to any one candidate yet.  But I do like Bloomberg more than I expected to and I am keeping an open mind.  My North Star is Rick Wilson’s North Star and that of most Democratic voters- defeat Trump resoundingly and make sure we win the Electoral College.