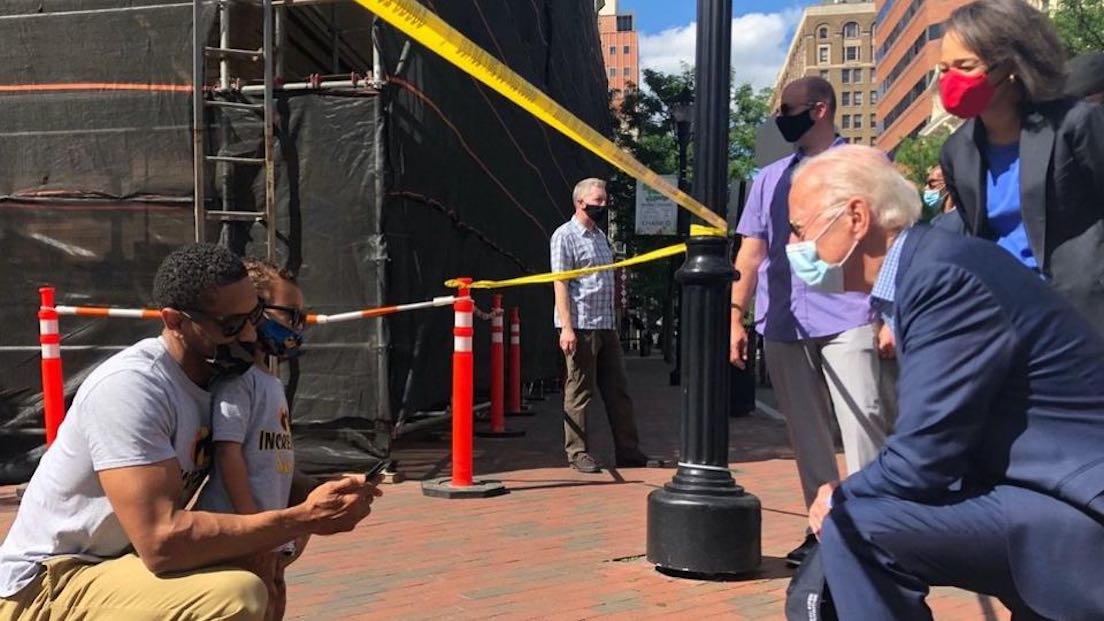 The contrast between Joe Biden and Donald Trump could not be more stark.  Trump has most recently engaged in a petty grievance battle with Twitter because Twitter had fact checked him about the outrageous lies he continues to push that mail in voting is somehow going to lead to rampant vote fraud.  There is no evidence for that and Twitter slammed Trump with a fact check.  So, Trump went ballistic.  Predictable.

Then Trump signed an executive order to try to punish social media companies that limit his so-called “free speech”, meaning: his fake news tweets. While Trump was engaged in his hissy fit, our country was facing the grim milestone of 100,000 deaths from coronavirus.  Other countries are doing far better at managing this crisis than we are.  We are losing more Americans to this virus because Trump is incapable of leading, incapable of creating a federal system to test and isolate, unable to manage this problem to protect Americans, failing to even mark the day with any form of compassion. Predictable.

Trump’s failure of compassion and lack of empathy was on full display even when made a bizarre statement about rebounding job numbers in June in the same breath as George Floyd:

WTF?! This is our president. He is a failed human being.

He has earned himself the name “bunker boy” which was trending on Twitter after he was too terrified of some protesters who had wandered onto land close to the White House. Trump was rushed down to the bunker in the basement. But after that Trump has encased the White House behind additional barriers creating a border wall for himself out of fear.

If Biden were in the White House he would be meeting with the protesters and listening to them- which he has been doing already.  The contrast between Joe Biden and Donald Trump has never been more clear.

Joe Biden has lived through many losses.  His first wife and their daughter died in a car accident. Then his beloved son, Beau, died from cancer.  Biden understands grief and he understands how to help people who are grieving.  Biden released a video clip in which he reminded us how a real president would speak and act.

“To all of you hurting so badly, I’m so sorry for your loss” and “This nation grieves with you.”

In the video, the presumptive Democratic presidential nominee directly addresses those who have lost relatives and friends. Evoking the personal tragedies he’s faced in his own life, Biden said, “I think I know what you’re feeling.”

“You feel like you’re being sucked into a black hole in the middle of your chest,”said Biden. “It’s suffocating.” (NYT)

The video is deeply moving because Biden is speaking from his heart and he is so authentic in his expression of empathy and concern about Americans that he ignites a yearning for the loss of a comforter-in-chief we have all been missing.  His pain and his concern show through.  Watching him speak brought tears to my eyes.

Empathy has been so absent from this administration and hate has been so prevalent, that the simple comforting words uttered by Joe Biden felt like a moment of shared peace and an expression of caring for all we are in mourning for. Lost lives. Lost unity as a country.  Lost democracy. Lost rule of law. Lost care for each other. Lost jobs. Lost hope for fairness for minorities and the disenfranchised.

These past three years with Trump in charge have ushered in a vast desecration of what the majority of Americans believe are American values, ethics, morals, norms and decency.  Whether you think Trump is responsible for all of this or that he is simply a sign of the times, you have to agree that Trump did nothing to stop this decay and that he piled on with extensive hypocrisy, disinformation and lies, and overt, rampant corruption.

The contrast between Trump and Biden is going to play out through the upcoming campaign in the next few months. Trump is betting that Americans will re-elect him if they believe he can put the economy back together after a pandemic, he will tell us, was a total surprise to everyone even though it was not. Trump is not capable of actually putting anything back together again at all. Nonetheless, he will take credit for a rebounding stock market as the country recovers from a decline so steep, any sort of rise would be seen as an historic recovery.  The stock market is not the full story of our economy, however. The Obama/ Biden administration brought this country out of the 2008 recession in a solid, substantial way.  Trump is trying to sell Americans on the idea that a rising stock market and the return of  some jobs is the same thing as economic recovery. It is not.

Biden is betting that Americans are going to vote for leadership, stability, empathy, good management and a return to decency.  Biden will make the election a referendum on Trump’s mismanagement of the pandemic and his abysmal reaction to the death of George Floyd and police brutality. Biden is banking on Americans having faith in his ability, not Trump’s, to get us back to economic health since he was one of the people who led the recovery after the Great Recession brought on by the GOP.  And it does seems that every time the Republicans wreck the economy, the Dems get elected and they have to clean up the mess the GOP left behind.  Americans should try to remember that lesson.

Biden has been working with a team of advisors to put together plans for the country to get us back to economic health. Biden sees the challenge ahead as a new version of the New Deal that helped our country get back on its feet when Roosevelt was our president.

For those of you progressives who are upset about the fact that Warren and Sanders have conceded, Biden has been talking with them both and has adopted many of their ideas and moved to the left in his policies.  Other progressives have been talking with Biden and they seem to be finding common ground. People who continue to berate Biden for his past centrist policy positions should recognize that some people really do evolve, change and grow in their thinking.  I believe Biden is doing that.  Take a look at his policies at Joebiden.com.

Biden has embraced the most left leaning policies in the history of our country. Read this Vox article:

Joe Biden has a plan for that

Not a joke, folks: He’s running on a transformative policy agenda.

If Biden were president right now we would have a federal plan in place to manage the pandemic using testing and tracing as they have done in places like New Zealand where they have NO cases of Covid anymore. That would allow businesses to open up without resulting in the deaths of more Americans.  Biden would lead with a federal plan that would help people to feel safe to reemerge from lock-down.  That’s the way to re-open businesses without infecting more Americans.

Biden wants to fix the economy to be fair and provide a way forward for all Americans.

Biden will bring back compassion and empathy.

He will address climate change in the most forward thinking way we have ever seen, return to the Paris Climate Accord, and move us away from fossil fuels.

He will re-instate the rule of law, norms and will keep our country from falling off the precipice into autocracy.

He will reconnect us with our allies and global alliances.

He will bring in the most diverse, capable group of people we have ever seen in government and he will empower them to rebuild and run the agencies Trump and the GOP have hollowed out.

And if we flip the Senate as well, we will see the end of Mitch McConnell’s right-wing appointments to the federal judiciary and Supreme Court, and we will finally have an end to endless gridlock in DC.

Wouldn’t it be nice to have capable, effective government for a change? The way to get there is to vote blue up and down the ballot and do everything humanly possible to flip the Senate and replace McConnell with Chuck Schumer, Dick Durbin or some other Democrat as Senate leader.  Imagine what that would do to help our country get back on track!

Wouldn’t it be nice if we could get back to our lives and stop worrying about what crazy, idiotic thing Trump is going to do next? his next awful tweet? or who he will pick a fight with next? or which allies he is going to insult? or which autocratic leaders he is going to kiss up to? which corrupt act he will engage in? which criminal he is going to pardon to keep himself from getting exposed? how much taxpayer money he will squander on his trips to go golfing? or what he and Putin have up their sleeves to damage America?

And wouldn’t it be nice if we knew we had a democracy again and if someone wins a presidential election we wouldn’t have to worry if the defeated president will agree to actually leave office on January 20th at noon according to the express wording of the 20th Amendment to the Constitution?

The way to get to that state of affairs is to vote in huge numbers, massive numbers, to vote out both Trump and the GOP so that Trump has no basis for claiming he didn’t lose.  These swing states will be absolutely crucial: Michigan, Wisconsin, Pennsylvania, Florida, Arizona, Iowa, Ohio, North Carolina.  Trump needs to lose big in those states for Biden to get a decisive Electoral College win.

Are you ready for this nightmare to end? Get active!  The election is coming up faster than you think.

You can help.  Here’s what works: calls to voters, postcards to voters, supporting Senate candidates and supporting Joe Biden as well as his super PACs. One really terrific group is American Bridge PAC. They are running convincing ads in battleground states on local TV telling the stories of former Trump supporters who have turned against him who explain why they changed their minds about Trump and would not vote for him now.

Here is the link to that PAC if you want to help to make a real difference: https://americanbridgepac.org/

Other groups putting together effective ads are: The Lincoln Project, Republican Voters Against Trump, and Meidas Touch. All of them are doing compelling ads and all could use our support.