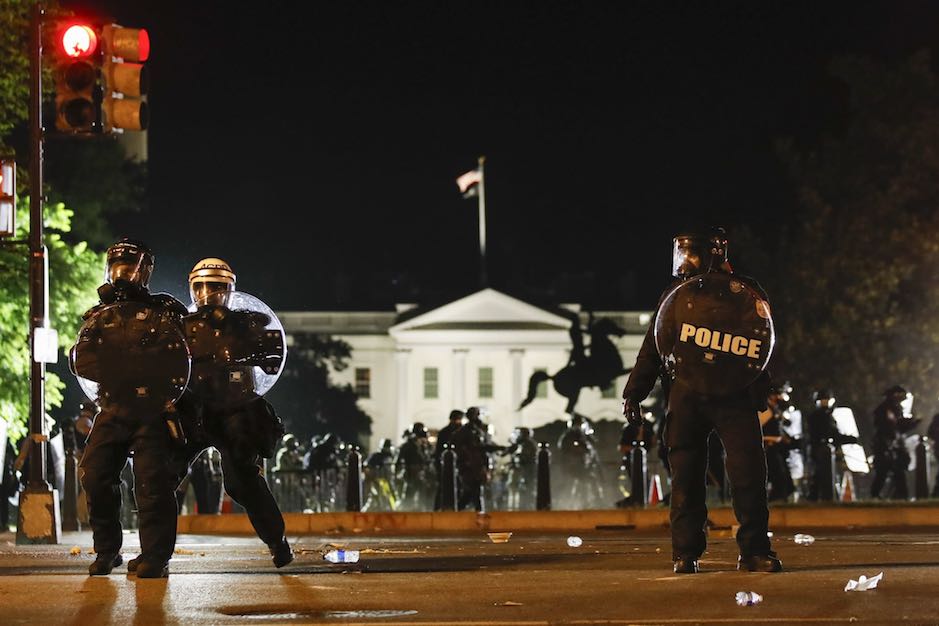 Trump has turned the White House into his hidey-hole where he hunkers down behind newly fortified fencing and wire mesh, away from “them”, the American people he fears.

Trump has reason to be afraid because he has denigrated and attacked so many people of color and minority groups in America. He has put himself firmly on the wrong side of history by aligning with white supremacists, and continuing to support Confederate symbols that appeal to his base despite rising public opinion against that. He never pretended to represent all Americans, but now he is more obviously out of touch with America. The majority of Americans are moving left on the issue of social justice while Trump stands firmly against this cultural shift.

Trump’s verbal assaults, insults, put downs and attacks on people he sees as the “other”: immigrants, people of color, and women, have given rise to a growing urgent wish on the part of a majority of Americans to expel him from power. The expression of this wish is what we are seeing on the streets of America.

He will reap what he has sown.

He is losing in the polls.

He is losing ground with white men, evangelicals, Catholics, and he already lost women across the board. Biden is up in most polls between 7 and 14 points at this time and if Trump continues to side with the angry white base that got him into office, he stands to lose more support because Americans have quickly shifted in their thinking about Black Lives Matter and police brutality up from a +17 to a +28 point margin in just two weeks. (Civiqs poll) This is a huge shift of opinion especially in a country that has not seen much shift in opinion on culture war issues since Trump was elected. Biden is pulling ahead of Trump in many of the key battleground states that Trump won in 2016.

He is losing the culture war.

It is suddenly OK to take a knee in the NFL even though Trump still says it isn’t. Cities are reimagining their policing policies (which is what is really meant by the slogan- “Defund the police”). The House Dems have already weighed in with legislation banning chokeholds and challenging whether police should get qualified immunity and whether we need to de-militarize local police. There is suddenly a call to get rid of Confederate symbols including the Confederate flag at Nascar, Confederate statues, as well as rename military bases that were named for Confederate generals.

Trump and the GOP have been caught off guard by this remarkable social justice movement and are trying to work on their messaging and legislation that can help them make the case they are not really for regressive law and order style authoritarian policing after all.

Despite the fact that:

Trump and Barr, his enabler, used police to rough up peaceful protesters for his photo op at St. John’s Church.

Trump was ready to bring in active duty military (who do not ever belong on the streets of America) and threatened governors that he would send active duty troops to their states to get the marches under control even though that is the job of the governors who needed no help from Trump.

After three and a half years in which Trump has acted as an authoritarian wannabe, playing to his base which consists of many white supremacists, and used divisive rhetoric with the “Us” being white Americans and the “Them” being brown and black Americans, Trump has done much to inflame and agitate in this country and around the world.

The energy and motivation behind this uprising against unfairness and inequality is, in large part, backlash against Trump’s divisive rhetoric and vindictive acts while in office.

It is an expression of repulsion against this man, Trump, the ugly American, who represents the rise of white supremacy, the old boy network of white men in control of power, and the regressive presumption of white privilege that Trump has reinforced in his time as president.

This is the #metoo movement happening in the social justice space.

George Floyd’s last words “I can’t breathe” are also symbolic of the suffocation of our democracy, the last words of Covid victims and the experience of disadvantaged people across America, all coming together as a condemnation of Trump.

Americans of ALL ages and skin colors are turning against what Trump stands for. His divisiveness has been utterly repulsive to a majority of Americans.

And what does Trump do in the face of demands for social justice in the country? He falls back on lies and bizarre conspiracy thinking.

Remember that 75 year old man who approached the police in Buffalo, New York, who is pushed by one of the officers, loses his balance, and falls backward onto the pavement hitting his head and is left there as the blood from his head pools beneath him? That man is Martin Gugino, a long time social justice supporter. The incident was recorded on cell phone video by a bystander, Antonio Wells:

Antonio Wells says he watched as long-time activist Martin Gugino was pushed to the ground by Buffalo police following a peaceful protest in Niagara Square Thursday.

Wells was recording on his phone in front of City Hall Thursday night. Wells was one of the few protesters who stayed after a peaceful protest and initially defied the 8 p.m. curfew and police orders to leave.

“He got up off the steps, walked up to them and said ‘no — I’m not going to move’ and that’s when the police said ‘push him, push him’ and then they pushed him to the ground,” recalled Wells.

“So you’re saying you actually heard the police say push him – push him?” asked Buckley. “I did hear that — yes,” replied Wells.

Gugino, who is known to be a peaceful man, not an agitator, was taken to the hospital and seems to be recovering. This was another instance of police brutality caught on a cell phone video.  (By-the-way, hundreds more of these incidents are suddenly being covered by the media.)

What does Trump do with these facts?  He runs away and hides. He traffics in a conspiracy theory being floated by OANN, a far right “news” source.  Here is Trump’s tweet:

Buffalo protester shoved by Police could be an ANTIFA provocateur. 75 year old Martin Gugino was pushed away after appearing to scan police communications in order to black out the equipment. @OANN I watched, he fell harder than was pushed. Was aiming scanner. Could be a set up?

Some people have been uncertain about whether Trump is himself a believer in conspiracy theories or if he is using them to advance his political goals. How about both? Trump was a die-hard birther, a believer that Obama was not born in the United States despite the evidence to the contrary. Time after time Trump retweets these nutty ideas and he traffics in self-serving lies which he wants others to think are the truth despite factual evidence to the contrary.

Colin Powell was interviewed by Jake Tapper on CNN this weekend. He announced why he cannot vote for Trump and will vote for Joe Biden for president:

Asked why it was so important to him that Trump not be reelected, Powell said that he thinks Trump has not been an effective president and that he lies “all the time.”

Why does Trump lie all the time?

1) There’s a political advantage for him to play to his right-wing base.

2) The authoritarian playbook is all about pushing false narratives that people adopt which sets up the leader as the only one who dictates reality.

3) Trump also lies to retrofit the world to be the one he wants not the one that is. The world according to Trump- a world he has made over in the image of one that totally supports him, applauds him and excoriates his “enemies”.

What will he do now that so many Americans have risen up to criticize the way he is handling law and order in America?  We know how he will respond. He will cower and hide; he will lash out; he will double down; he will read prepared remarks from a teleprompter that have nothing to do with what he really believes.

Trump uses lies to hide from the truth.

Trump uses fortification around the White House to hide from the American people.

He has turned the White House into his Hidey-hole. But Americans are not going to allow him use the People’s House to shield himself from their rebuke. They are rising up against not only the failure of equal protection under the law, but three and a half years of an unfair and inept president they are ready to expel.

The American majority and the next generation has found its voice in time for the election in November.