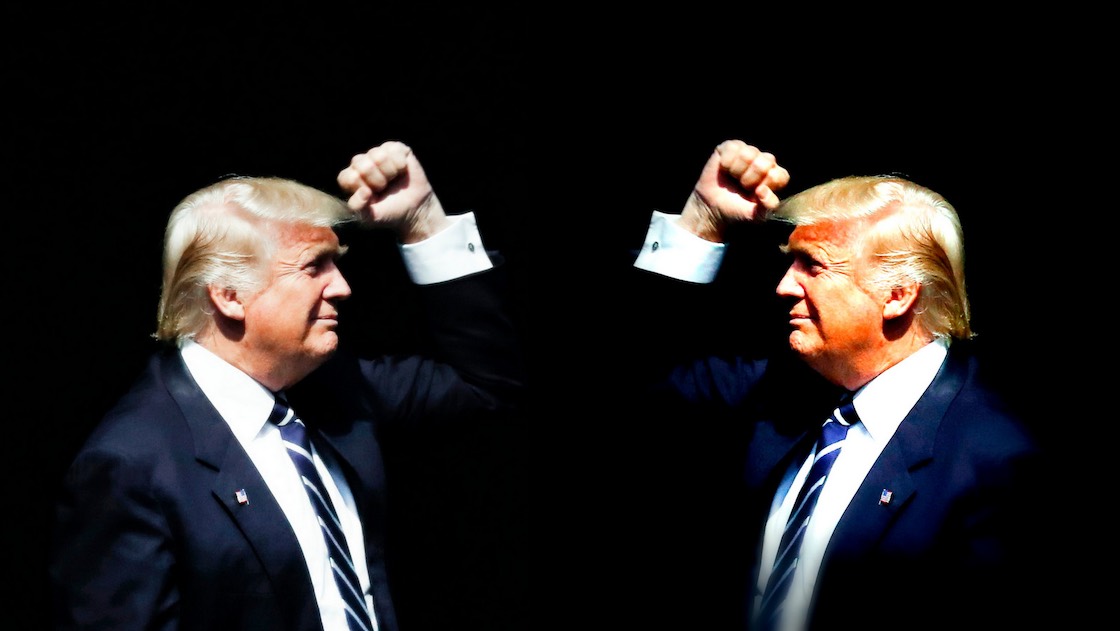 Trump has created an alternate universe that Trump knows is false but his supporters buy into. In that dystopic alternate world the pandemic is almost over, climate change is nothing to worry about, mail-in voting is rife with voter fraud, and antifa is about to slash your throat if you live in suburbia. There is no basis to this alternate universe in reality or fact. It is a fictional world of Trumps’ own creation. It’s a hoax- a malicious deception. But Trump vigorously promotes these ideas to his cult of followers despite the fact that he knows he is peddling lies.

Trump supporters have been taken in by the con. If enough Americans in battleground states believe in Trump’s reality distortion field, Trump could be re-elected thanks to the Electoral College. Trump is betting he can convince enough people in battleground states to buy his version of reality instead of the truth that he can make it across the finish line, get a second term, and a get out of jail free card for 4 more years. It would be his ticket to turn the US into a dictatorship at that point- because he would be unstoppable.

One of the best examples of the way Trump works his alternate universe con is revealed  in Trump’s own words in his taped interviews with Bob Woodward. Trump knew in January that the virus was airborne, that it was more deadly than the flu, a “killer”, the “plague”, that children could get it, and that it would be the biggest threat to his re-election. Trump is on tape telling all of this to Bob Woodward.  If Trump supporters would bother to listen to the taped conversations of Trump speaking with Woodward, they would know that Trump is lying to them and selling them a bunch of hooey about going maskless and not to worry about social distancing.

Trump (and Fox News hosts) have been successfully selling Trump supporters a con job about the pandemic: the virus is going to go away, it’ll just disappear on its own even without a vaccine, masks are for sissies, real men don’t social distance, and now he claims he has done everything he could to keep Americans safe – no one could have done more.  Okay… that’s a big fat lie. Most recently he claimed that our record on the pandemic would be great if you don’t count the blue states. Nope. We would still have an abysmal record. The red states account for over 90,000 deaths which would make our country the second highest in death totals globally. Besides, last time I checked we were the UNITED States of America.

To bolster the alternate reality he has hyped, he has had defiant freedom-lover indoor super spreader rallies as in Nevada last week, the Republican Convention, and many other events. He puts his supporters in harms way by packing them in tight and not mandating masks. Notice that his supporters have to sign a waiver to come to the event because Trump KNOWS he is putting these people at risk. He doesn’t want a lot wrongful death lawsuits when coronavirus kills some of them off as the Tulsa event did with Herman Cain. Trump is selfishly risking the lives of his most loyal supporters in his desperate effort to get re-elected. When asked if he was concerned about these events that feature maskless packed audiences, he said no because HE was far enough away from the crowd to be safe.

Trump has called himself a wartime president. Yes, America is at war. Our country has been beset by 4 huge assaults at once.

First, there’s the pandemic which, because of Trump’s interference and mismanagement, has cratered our economy and devastated lives of Americans resulting in lost jobs, lost health care, lost health, lost homes, and food insecurity for millions of Americans.

Second, there’s climate change which has created huge raging fires in the West with smoke that turned into cyclones with their own embedded lightning, more powerful hurricanes in the Gulf, and ice caps melting at a rapid rate which will cause sea level rise imperiling coastal areas.

Third, there is social unrest and mainly peaceful marches to support the Black Lives Matters movement in response to the unfairness documented by cell phone footage proving that people of color are treated horribly are killed by police in unequal numbers.

Fourth, our democracy and cherished “free and fair elections” are being attacked by Russia working in tandem with Trump and Republicans to suppress the vote, discourage Dems from coming to the polls and cast doubt on the reliability of mail-in ballots.

America IS at war and Trump is not on our side.

Instead, Trump is at war with reality, truth, science, and facts. He has pitted himself against the interests of the American people he is supposed to protect. America’s war needs to be seen for what it is. The war we need to wage is against the domestic terrorist who is our president. We need to do that by countering his lies, his cons and his corruption.  We need to do that by showing up to vote. Millennials and younger voters I hope you are listening and planning your vote. This is your future world blowing up before your eyes.

We know by now there is only one person Trump cares about. Himself. There is only one thing on his mind. His re-election.  If he were not protected by Bill Barr and the many people he has installed as his loyalists in positions of power in government, if he were once again an ordinary citizen, he knows he would be prosecuted for his rampant corruption and illegal activities. Those indictments are being worked on right now by the NY States Attorney, Cyrus Vance, and they are not subject to a presidential pardon which only applies to federal crimes. Trump knows he could end his life in prison instead of playing golf and spouting disinformation on Fox and Friends. That has motivated Trump to pull out all the stops.

Cornered and desperate, Trump needs Americans to buy the alternate reality he is pedaling in order to be re-elected.

Because if you believe the pandemic is not over and the economy is not going the right way and our country is on the wrong track, then you will not vote for Donald Trump. But if you buy into QAnon, watch Sean Hannity, Fox News and listen to Rush Limbaugh you are being brainwashed to believe in Trump’s alternate universe reality.

More and more Independent voters do seem to understand the stakes and are rejecting Trump’s alternate universe for the sanity and fact based world represented by Biden and the Democrats. Biden continues to lead but only with narrow margins in the battleground states that Trump won in 2016. In the townhall meeting on Tuesday night with George Stephanopoulos, Trump was confronted by Independents who asked him tough questions about real concerns they have like what will happen to them because they have pre-existing conditions, what about the pandemic and systemic racism.

Trump forcefully pushed his alternate reality in his answers claiming he would give Americans even better health care than Obamacare and it would include coverage for pre-existing conditions. Huh? George Stephanopoulos had to correct the record by reminding the audience that the Trump administration (DOJ) went to the Supreme Court 3 months ago to forcefully argue for the dismantling of the ACA which would end protections for people with pre-existing conditions.  It has been 11 years now and the Republicans have not introduced any bills that would give Americans ANY health care.

In this townhall Trump attacked the question as he often does when asked questions he does not like. To their credit, voters in the room did not seem to be buying Trump’s fantasy world and a number of them told him to stop interrupting them so they could finish asking their questions.

Brace yourself. Trump’s alternate universe is going to continue and it will get even worse in the next 50 days as we get closer to Election Day.

In the beginning of Trump’s presidency it was clear that he was testing the water to see what he could get away with, and slowly but surely removing people who were independent thinkers or believed in science and followed fact based logical thinking. He replaced them with loyalists, syncophants and corrupt donors like DeJoy, Bill Barr and many others who collaborate with him to create and sustain the alternate universe. We have very few independent thinkers who are on the side of us, the American people, in charge of agencies and wielding power anymore.

Mike Caputo is a case in point. He is the spokesperson for HHS. Caputo appears to be seriously mentally ill, suffering from paranoia.  Here is what he said in a Facebook video:

The Facebook video ran through a long list of conspiracy theories, including that Trump would win the election and Biden would refuse to concede, that left-wing hit squads were being trained across the country, and that there was a “resistance unit” in the CDC aimed at undermining Trump. There is no basis for these claims.

“I don’t like being alone in Washington,” Caputo said in the video, describing feeling fear from shadows in his apartment.

Caputo is taking a leave of absence for medical reasons and I hope he gets help. But there are still plenty of other co-conspirators and deranged people running the show in this administration now.  Bill Barr comes to mind.

Trump is ultimately at war with any sane American who know the truth, listens to scientists and believes in facts. He is desperate to get us to accept the Trump UNReality TV Show. This is Trump’s gamble to win re-election: getting Americans to accept HIS version of reality even at the risk of losing their own lives.