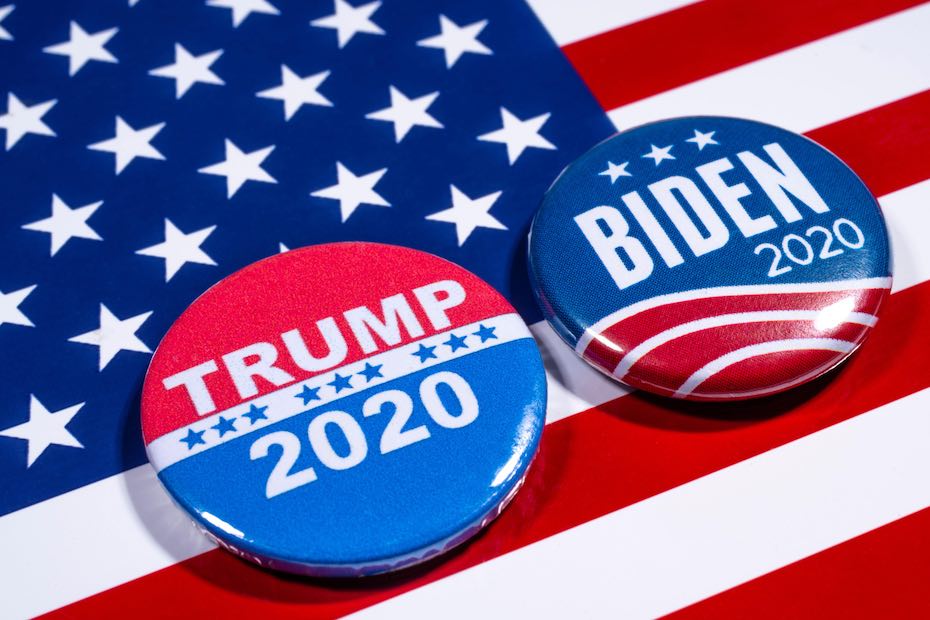 Joe Biden currently holds a lead over Trump in four of the most important states either candidate needs to win to be elected. These states are Wisconsin, Pennsylvania, Florida and Arizona.

In Arizona Biden is up 6 points.

In Florida Biden is up 3 points.

In Pennsylvania Biden is up 6 points.

If Biden’s leads hold, he will win these states and that would be enough to win the presidency. If Biden could win Florida he would only need one more large state to get to 270 electoral college votes.

Throughout the entire campaign Biden has led Trump by various degrees but he has always been in the lead in these key battleground states and in the national polls.

More than 90 million Americans have voted at this point and there are still two days to go in this election.

Trump has played to his base for his entire presidency. He continues to play to the same base: rural conservatives and evangelicals and low education white males with an improvement for him with some segments of the Hispanic population including Floridians of Cuban extract.

But he is losing many other demographics: women, minorities, voters in cities and suburbs even in red states, seniors, and young voters as well as new voters.

In all of these four key states, voters who did not turn out in 2016 but either already voted or plan to vote are supporting Biden by wide margins. Some of these voters have not voted yet although they intend to do so.

The Biden campaign is hard at work chasing them down and making sure they follow through. If you want to help with this effort go to joebiden.com and jump in to help Joe and Kamala win.

This country is seeing historic early voting including first time voters showing up to vote in historically high numbers.

Early-voting counts suggest a record level of civic participation before Election Day. The tens of millions of ballots already cast show highly enthusiastic voters are making sure their votes are counted amid a pandemic.

Democrats hope this energy leads to a decisive victory on Nov. 3. Registered Democrats are outvoting Republicans by a large margin in states that provide partisan breakdowns of early ballots. Republicans, however, are more likely to tell pollsters they intend to vote in person, and the GOP is counting on an overwhelming share of the Election Day vote going to Trump. [Washington Post]

Engagement is high on both sides of the political divide in an election where turn out will be the deciding factor.

So far Democrats are voting early, preferring to vote by mail and/or deliver their ballots to designated ballot boxes because of the pandemic. We know this because high numbers of early voters are showing up in known Democratic districts. Dems are willing and determined to stand in long lines to vote in person early against Donald Trump because they understand that this election is historically the most important election of their lives and will determine the future of this country.

These early vote numbers dwarf the numbers we saw in 2016. In some places the early vote is at or close to 100% of the vote in 2016. That should make Democrats hopeful. But every Democrat I know is suffering from post traumatic stress disorder because Hillary lost after looking like a sure thing.

Republicans are expected to show up to vote in person on Election Day. The question will be whether the uptick in early voting in Democratic districts will be offset by massive numbers of Republican voters on Election Day.

Some states count their votes very quickly and early while other states do not. Significantly, the rust belt states: Pennsylvania, Wisconsin and Michigan, states that got Trump over the Electoral College threshold of 270, will be late to finalize their vote counts. If early indicators are not decisive in states that yield results quickly, we may all be holding our collective breath after Election Day waiting to get the final counts from the Rust Belt states as many more mail in ballots get counted. Florida, however, is a state that will provide an important early indication of the ultimate result.

The Senior Voter in Florida Could Be The Earliest Predictor

When it comes to election night, all swing states are not created equal. Wisconsin, Pennsylvania, and Michigan can’t tally a single absentee ballot before Nov. 3, and it could be days or weeks before it’s clear who won them.

Florida, however, is in a different group of swing states that President Trump won in 2016, along with Arizona and North Carolina, that are allowed to start their homework early and expect to post the results from millions of mail-in ballots shortly after the polls close. That means they could actually offer some clarity amid the uncertainty, especially as Election Day totals are added as the night goes on. [Boston Globe]

Dave Wasserman of Cook Political understands polling data as few other human beings on earth do.  He reports that he will be watching a number of key districts across the country on Election Night to get the pulse of the nation. It may be possible to predict the outcome earlier than some people think based on a few key districts that reflect larger voter blocs.

One important district he plans to watch on Election Night is Sumpter County, Florida, where there is a huge Florida retirement complex called “The Villages”. In this retirement complex the average age of retirees is 68.9. Estimates vary, but up to 75 percent of the residents of The Villages usually vote Republican. Remember when Trump retweeted a man in a golf cart who shouted out “white power!”?  Yeah. That guy. Well that man lives in The Villages in Florida.

However, turns out there are also a growing number of Biden supporters in the Villages. They have been emboldened to have their own golf cart parades in support of Biden. Recently there was a parade of 300 of them who took to their golf carts to turn in their ballots. This retirement community could be the first early predictor of the outcome of the entire presidential election. Why? Because it promises to be the first indicator of what is being termed a possible “gray revolt”. Trump will win in Sumpter County. The amount of erosion of support is what matters. In 2016 he beat Hillary 68 to 29. But this time there will be a defection and it matters how high that defection is. If Trump wins 60 to 39 that would indicate a large defection of seniors from Trump that would predictably be multiplied across the country. If Trump wins, for example, 66 to 33 there, then Wasserman believes that will be an indicator of Trump’s continued strength.

Trump needs seniors to win this election. They were solidly in his camp in 2016. But lately Trump has been giving this powerful voting bloc the strong impression that their lives are less relevant than the lives of younger Americans who want to go to bars and live as if Covid is not really happening. Many seniors are upset with Trump about that. 56% of seniors fear the worst is yet to come in this pandemic. They are watching the Covid tracking numbers and the rising death toll. The more Trump embraces “herd immunity” and super-spreader rallies, the more seniors believe that Trump is throwing them under the bus.

In Trump’s attempt to attack Biden, he has tweeted out an insulting photoshopped image of Biden in a wheelchair surrounded by old people with a sign reading Biden for President with the “P” crossed out so that the sign reads Biden for Resident instead.

“Senior citizens are America’s most reliable voters — and a group that’s been disproportionately affected by the coronavirus pandemic. Biden’s gains with seniors just weeks before Election Day could give him an edge in voter turnout.” [Axios]

If Trump has ignited a “gray revolt” we should know how serious it is about 7:15 to 9 pm on Election Night. Trump cannot win without the strong support of this voting bloc.

Here are the battleground states to watch:

Most of these states will first report unofficial results based on vote cast and ballots received by poll closing on Election Day, along with the number of outstanding mail ballots. But that means if the race is close, they might remain uncalled until results are certified days and sometimes weeks later.

However, if any of these six states — all of which Trump won four years ago — were called for Joe Biden on Election Night or the next day, it would point to a likely Biden victory. Donald Trump cannot really afford to lose any of them.

Is Texas in Play?

Texas is looking more purple every day. The state is seeing huge early voter turn out. Most telling is the turn out of younger voters who are enthusiastically voting for Biden and Harris. More to come on this in future updates.

The Rust Belt Path to Victory

The Rust Belt states of Wisconsin, Michigan, and Pennsylvania were Trump’s path to Electoral College victory in 2016.

Many of those voters remain loyal to the president. Still, support for Trump is slipping in these states this year, and the pandemic is a big reason why. Polling data show the 2020 race is increasingly becoming a referendum on the president’s handling of COVID-19.

Reuters/Ipsos polling, conducted 9 to 13 October, showed 50 per cent of likely voters nationwide feel Biden would be better at managing the pandemic response, compared to 37 per cent for Trump. [The Independent]

Many commentators have said that if the closing arguments in this election is about coronavirus, Trump will lose.  There is no way to get economic recovery without taming the pandemic that is ravaging this country. Herd immunity survival of the fittest won’t do the trick. Ask Sweden. They tried that approach and their economy tanked. Sweden is now imposing coronavirus restrictions to HELP reboot their economy.

Trump Has Given Up Trying to Protect Americans from the Pandemic

Trump has given up trying to protect Americans from a viral enemy that is killing us and destroying the health of many survivors who have long term impairments including brain fog and lack of energy as well as potential for life threatening blood clots. Trump is trying to use denial as his closing argument when it comes to the pandemic. He is not running on a platform of policies, but on a cult of personality. However, crucial Midwest states that hold the key to Electoral College victory are some of the states being most profoundly stricken by Covid in the closing days of the presidential campaign.

Biden’s closing argument is that he will fix the economy by managing the virus. He has explained in detail how he would accomplish this. Unlike Trump, Biden is a DC insider who understands how to get things done. Many Americans who wanted Trump to win because he was a Washington outsider have learned their lesson. They see the value of a Washington insider after 4 years of Trump. Biden is a roll-up-your-sleeves kinda guy who has figured out plans to solve our pressing problems by talking with experts and is ready on day one to get to work.

If you are worried the most important thing you can do with your worry is to get active. Help the Biden campaign reach out to voters by calling and texting them. Go to Joebiden.com to help get out the vote.