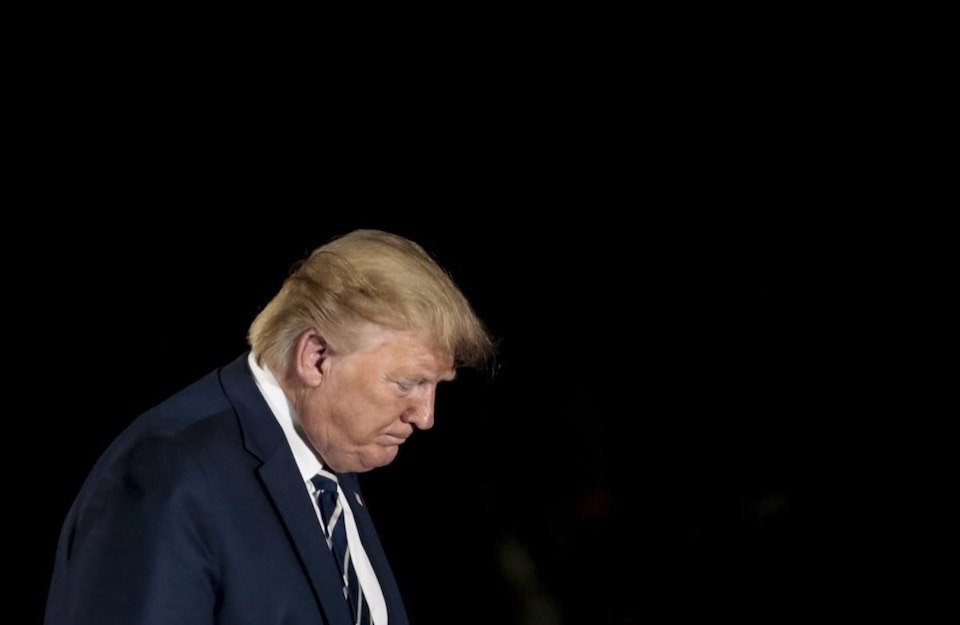 You are toast whether you know it yet or not.

Yesterday you tweeted that Biden “won” but the election was “rigged”. Then later on you took it all back. Look, this election is over, you big crybaby. Your own Department of Homeland Security reported that this election was the “most secure in US history”. Your early threat that you would claim the election was rigged put every secretary of state in every state in the union on high alert to make sure the election was squeaky clean and fully documented with cameras everywhere.

What makes you the biggest loser is not that you lost, but that you don’t even care about being president and yet you’re blocking the next team from getting access to information they need for an effective transition. This country is being ravaged by the pandemic but you don’t care. Americans are getting sick and dying in numbers we have not seen before, losing their jobs, their homes, waiting in food lines, waiting in long lines to be tested for Covid and hospitals are overwhelmed with cases. You are trying to hold onto power for your own good, not the good of this country. This is about getting your base to send you money and delegitimizing Joe Biden as our next president.

Biden also resoundingly won the popular vote with the largest number of votes in the history of this country.

The U.S. just surpassed *153 million* votes counted and Biden’s popular vote lead is up to 5.29 million.

On January 20th at noon the awesome power of the presidency will be transferred to Joe Biden because our country still has a Constitution we follow, not a dictator.  At that moment, Donald Trump, you will become a regular citizen. Whether or not you concede is irrelevant. You will recede into the dustbin of history as the worst president our country has ever had to put up with. Over time you will become more and more irrelevant.

All the Sane Americas Who Voted You Out of Office

That “disputed election” concept written about by Barton Gellman in The Atlantic would only have worked if the outcome was much closer and there was just one state that had to be contested. No one state will be able to substitute a slate of Trump electors for the electors who represent the will of the voters in states that were fairly won by Biden in order to overturn the result of this election.

The Trump cheat-to-win playbook was set up with the hope that maybe a state like Pennsylvania would be super close, as Florida was in the Bush v Gore showdown. The goal was to try to win by claiming it was too close to tell who won in that state and get a Trump slate of electors sent by Republican state legislatures to show up for the electoral college vote in Congress to create chaos.

That will not happen.

Biden won resoundingly in Pennsylvania. The Governor of Pennsylvania is a Democrat. There is no way Trump would ever get that Governor to sign off on a slate of Trump electors to usurp the slate of Biden electors reflecting the popular vote. In addition, GOP led state legislatures in Pennsylvania, Wisconsin, Michigan and Arizona have said they will NOT send a slate of Trump loyalists to Congress for the Electoral College vote.  Even if Trump tried this ploy in Georgia, he would still be too far behind in the electoral college to win. It’s game over for the Red Mirage play.

Trump’s baseless lawsuits claiming vote fraud are being laughed out of courtrooms across the country. Judges do not like having their time wasted by frivolous law suits.  Judges are directly questioning the attorneys for Trump asking them to tell the truth about whether they have evidence of vote fraud. They don’t. Trump is batting zero on these claims of vote fraud. One lawsuit got the Trump team a few feet closer to observe ballot counting. The two reputable law firms that Trump had hired have withdrawn as counsel for Trump: Porter, Wright, Morris and Arthur, and Jones Day. Lawyers who make false claims can risk losing their licenses. Courts require factual proof. Tweets and social media won’t do.

Crazy Rudy Guiliani is all that Trump has left to lead his rag tag legal team. It is a sad state of affairs when you have nothing left but the 3rd and 4th string. Guiliani showed up for a rant he called a press conference at the Four Seasons and it turns out it was not the swanky hotel but 4 Seasons Landscaping Company located near a crematorium and a sex shop. This is what you get when real lawyers and the first string abandon you because you are a despicable liar.

What if Trump Never Concedes?

Trump may never concede. Trump was trained by his unprincipled father, Fred, that you never admit you lost because losing is the worst thing EVER. Better to live in an alternate universe where you claim you were horribly mistreated by unfair, cheating, lying sons of bitches. That way the fight against reality can go on and on, the alternate universe can continue forever.

The problem with failing to concede is that the GSA is refusing to conduct a transition without a concession.  Emily Murphy is the GSA administrator who won’t cross the Donald. Trump has ordered his staff not to help the Biden transition team in any way.

Emily Murphy, of the General Services Administration, is refusing to fulfill her responsibilities to President-elect Joe Biden. According to the Center for Presidential Transition, Murphy is required to certify that he is the president-elect the day after the election. She has failed. By refusing to sign the transition papers, she has denied President-elect Biden office space, support services and, most importantly, a classified security briefing (that is required as soon as possible after the election).

Is Emily Murphy now the arbiter of American democracy? Thirty days before the expiration of President Donald Trump’s term, Murphy is also tasked with supplying support to the outgoing president and vice president for up to six months. This support cannot be offered if the transition is being denied. Murphy is violating the Presidential Transition Act of 1963.

This is not just pettiness, it is dangerous for our country. Foreign enemies always try to attack a country when it is weakened (remember 9/11?). Transitions from one administration to the next are times of weakness for any country. Refusing to give the Biden team access to information about the pandemic is also dangerous.

There could be a way around this problem.  Senator Ted Lieu made the suggestion. The House, by a simple majority, could pass a new rule to require that when subpoenas are issued by the House, they must be obeyed and that failure to do so would be contempt of Congress subjecting the person to incarceration. The House could then subpoena Emily Murphy and threaten to hold her in contempt for violating the Presidential Transition Act. The Dems still have the majority in the House. They should do this.

What Will Trump Do Next?

Trump will never really concede. I expect him to whine all the way to Mar a Lago maybe as soon as Thanksgiving and just stay there, hunkered down, crabby as hell, and in denial so that he can maintain the image he needs for his rabid, low information base: aggrieved fighter.

Speaking of his base, Trump’s remaining loyal rabble had a Million Maga march today in Washington, DC. The head count was NOT a million. It was a few thousand even though Kayleigh Mc Inany lied about the size just like Sean Spicer lied about the size of the crowd at Trump’s inauguration.

And who showed up? Americas finest: white supremacists, conspiracy theorists, Bugaloo Bois, Proud Boys, militias and hate mongers.  These must be the 3% of Americans who still think Trump won the election and got cheated out of his second term by the Biden “crime family”.  They will be the target audience for the new Trump TV channel that is already in the works. Maybe Trump could make a fortune off of these rubes. They do and think what they are told by him.

Is he crazy like a fox or crazy like a crazy person?  That question has bedeviled therapists for the past 4 years. I think Trump is both. At this point to really believe the election was “rigged” is crazy like a delusional person, but to think he was cheated out of a second term is Trump’s best way to launch a successful Trump TV empire that could rival and maybe even beat out Fox News some day. (Hmm, no wonder he is putting down Fox News to his followers.) If Trump can create a successful Trump TV network, he might actually become the billionaire he always wanted to be and needs to be to pay back his huge debts. He owes a billion dollars in outstanding, soon to be called loans that are owed to mysterious shadowy entities.

Will Trump Go to Jail?

But there is something in the way of Trump’s bright future. He will be fighting lawsuits for the rest of his life- both civil and criminal. They may not hit all at once, but they will be a constant drag on his legacy as the hero of the conservative right wing. Once he is out of power, many Republicans will be thrilled to be out from under his thumb. They will do their best to undermine him.

That will relieve him of pending federal crimes but do nothing to protect him from state crimes that Cyrus Vance, NY States’ Attorney, is currently investigating. Trump is being investigated for income tax evasion, for example. A strong paper case like that is likely to be pursued by Vance’s office. Trump will face imprisonment but only from crimes that he carried out before he was president. That will help to keep Trump from becoming a political martyr for which his base would blame Democrats- what else is new.  But it could also keep Trump from trying to rise from the ashes and run again in 2024.

And What About His Enablers?

Over time Trump will not be listened to the way he is today. His tweets will not scare people because he will not have the power of the presidency to use as a carrot and a cudgel. His Republican enablers will emerge from their hiding places “behind closed doors” and try to simply move on. “Trump who?” they will say. I don’t think Americans should let them do it.

Trump’s terrible, horrible, no good presidency is coming to an end. We just have to make it to January 20th at noon.