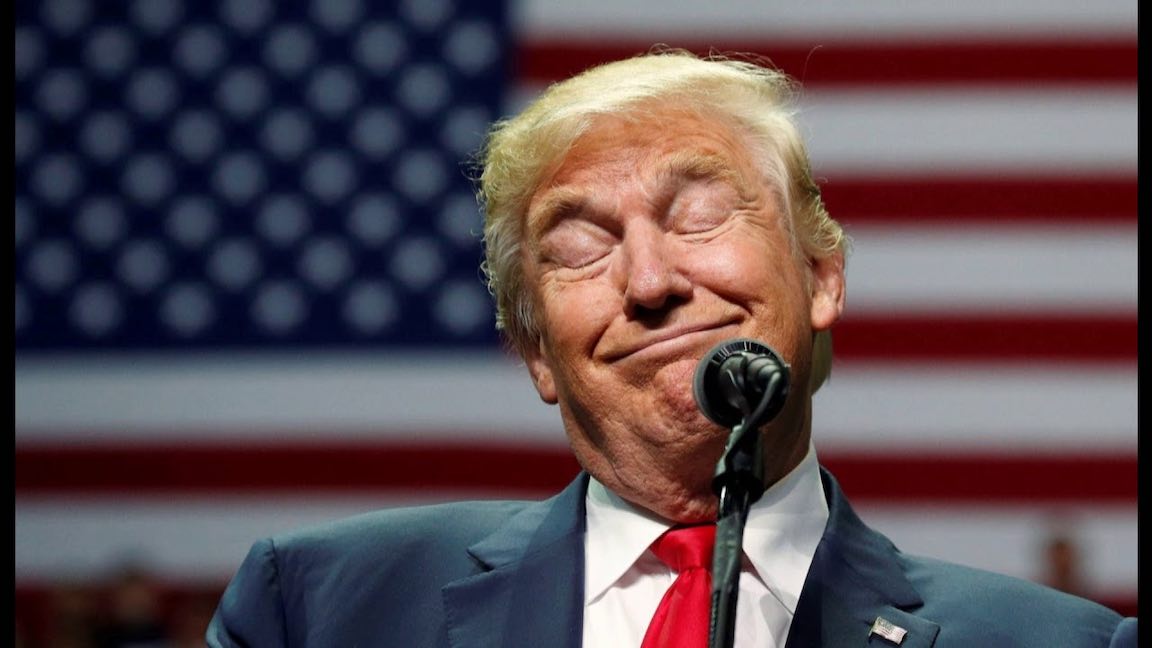 Trump is Still Trying to Cheat to Win- Will He Succeed?

Sore loser Trump lost his re-election bid while Republicans in down ballot races won elections in numbers that surprised just about everybody. That means many Americans split their tickets voting Trump out but voting to keep many GOP lawmakers in Congress and in state houses. If Trump is correct that Biden’s win is illegitimate, then all the other Republicans who won their down ballot races are illegitimate too.

Trump is in a big pouty pout funk and said to be hunkered down in the White House with a “bunker mentality” after losing to Joe Biden. This is reminiscent of Hitler in his bunker surrounded by his sycophants at the end of World War II.

Trump’s refusal to concede is toxic to our democracy and to the Biden administration. Why? Because Trump is spreading lies and his lies are taking hold with uninformed people who believe the trash they get on so called conservative media. 77% of Republicans think Biden’s win was the result of fraud. Trump’s misinformed, angry supporters are juiced up about this. Trump may have lost the election but he is succeeding at delegitimizing the incoming Biden administration and he is getting help from Republican enablers as well as certain media outlets.

Why Trump Will Not Succeed

It is clear that Trump and his team of terrible, horrible, no good people are still lamely trying to run the Red Mirage playbook Barton Gellman wrote about in The Atlantic: a political scheme to defraud voters and break federal and state law by sending Trump loyal electors to the Electoral College in December in place of electors chosen by the voters. If elections in any of the battleground states had been razor thin close, the ploy of alleging a disputed election might have worked. But this election was not that close.

This is not a Bush v Gore type close election. At this point Biden has amassed at least 6 million more votes than Trump, which is the largest popular vote win EVER for a presidential candidate. Biden won the Electoral College advantage over Trump of 306 to 232 fair and square. Monday is the day Michigan and Arizona are supposed to certify their elections. Georgia already certified its election. Pennsylvania is also in the bag for Biden thanks to a ruling from a federal judge blasting Trump’s legal team, such as it is, for bringing an idiotic and baseless suit.

To run the Red Mirage game plan successfully now would require a large number of state and local officials to break state and federal law.  GOP state legislatures and Republican canvassing board members in key battleground states that Trump lost to Biden would need to be willing to take the personal risk of violating their state laws requiring that the slate of electors reflect the will of the popular vote. However, state officials could be indicted as co-conspirators in an election fraud to disenfranchise Black voters, for example, if they try to discount only districts with large numbers of Black voters claiming irregularities there even though the same irregularities exist in many other districts. Trump and Guiliani are attacking the vote totals mainly in cities with large Black populations. This really smells like a conspiracy to disenfranchise Black voters.

Nonetheless Trump is openly pressuring Republicans in key state positions who have the job of certifying the vote, to break the law for him, just as Trump has done before. (Remember the abuse of power in the Mueller Report and Ukrainegate- same Modus Operandi). The only fraud in this election is the one being perpetrated by Trump, Rudy Guiliani, and his team of deplorables.

Trump is not just a sore loser, he is well known to be a big cheater. He cheats at golf, for example. There’s a whole book written about what he does to cheat at golf: Commander in Cheat by Rick Reilly. Here’s an example from the author.

Reilly says that Trump will do whatever it takes to win a match. One time, that included interfering with sportscaster Mike Tirico’s ball. Tirico hit what he thought was the shot of his life into a par 5, only to find his ball in a sand trap. After the round, Tirico discovered how it got there.

Now he is trying to get GOP state legislators to cheat on his behalf.

Republican state legislatures and state officials need to stand strong in the face of Trump’s pressure or risk indictment.  Michigan’s Attorney General is helping them to do the right thing  by “pondering” indictments of Republicans who go along with Trump’s illegal pressure campaign. That should help these state officials remember they need to fulfill their pro forma duty to certify the election results for Michigan since every single county in Michigan has already certified their election result. After the certification there could be an audit, but it will not uncover fraud because there was none. If Michigan’s Republican officials refuse to certify on Monday, there will be an immediate appeal to a court and the judge will issue a writ of mandamus ordering the election official to comply with the law.

All of the Trump campaign’s 35 or so lawsuits so far have failed in federal court including cases that came before Trump appointed federal judges. These lawsuits have been frivolous and do not even allege vote fraud because if a lawyer makes a false claim in court he or she risks losing his or her license to practice law. Judges are dismissing these baseless lawsuits for lack of evidence.

Trump’s window of cheating to win is rapidly closing.

When Trump fails to subvert the election result, he will try to leave Biden with as many major headaches and problems, booby traps, and messes he possibly can. As Mary Trump and Michael Cohen have warned us, Trump is vengeful and will try to burn everything down that he can before leaving. I hope we get to see him being dragged out of the White House on January 20th kicking and screaming like the big baby he is.

What Are Republicans Doing About All of This?

Mostly nothing with a few notable exceptions: Ben Sasse, Mitt Romney, Jody Ernst, and about 8 others are bemoaning Trump’s intransigence. The rest are silent. They continue to allow Trump to keep up his assault on our election and our democracy. They are afraid of his power because over 70 million Americans voted for him. Trump was fired by the American people but, unfortunately, not sufficiently rebuked by the voters.

Republicans are also AWOL when it comes to the raging pandemic. Even in Congress many lawmakers have tested positive including 87 year old Chuck Grassley (Senator-Iowa), and at least 5 other Democrats and Republicans. Rick Scott tested positive (former governor of Florida). Don Jr and Rudy Guiliani’s son have tested positive. Rachel Maddow’s partner almost died of this virus. The entire country is experiencing a huge increase in cases and deaths. Americans need help and support. Many businesses are closing. People will soon be evicted from their homes. Children are out of school and trying to learn online but many don’t have access to computers.

Despite this, the Senate has done nothing helpful for the American people and Trump has been AWOL from any coronavirus task force meetings for 5 months- although that might be a blessing in disguise. Steve Mnuchin, however, is trying to make things worse for Biden by insisting on a return of funds that had already been earmarked for small businesses in need. The Fed took the unusual step of speaking out to stop Mnuchin from recalling these funds for businesses in need now that the pandemic is worsening.

And then there is Emily Murphy of the GSA. She is maintaining loyalty to Trump instead of doing her job. By refusing to “ascertain” that Biden is the “apparent winner” of the election (duh! He is!). She is preventing Biden from having access to transition information for the good of the country so that the roll out of the vaccine goes well and Biden is aware of any national intelligence threats as the transition occurs.  (Fortunately Kamala Harris is on the Senate Intelligence Committee and she has access to some of these intelligence briefings although she is not supposed to share that information with Biden.)

Delegitimizing Our Democracy and Joe Biden

Even though Joe Biden is the president-elect, he does not have the power to take action yet. Trump still has the power. He has the power to delegitimize our election, damage the country so that Biden will be faced with crises that will be huge headaches especially if McConnell continues to have the power to block Biden’s initiatives. For anyone who understands what is really going on with Trump and his sycophants, there is no other way to see this: Trump and his GOP allies are traitors to our democracy and to our country. This is something the founding fathers never anticipated in their wildest dreams.

It is shocking that Trump and the GOP are willfully damaging our democracy. Trump is acting out of petulance, fear and anger. He is a criminal and he will face multiple criminal and civil lawsuits the moment he cannot hide behind the shield of the presidency. Trump’s GOP enablers are unwilling to break with Trump to stop him from delegitimizing the election and the incoming administration because they are cowards. They know better but they are silent. Shame on them.  We are in for about 2 more months of this crap before Trump is out of power and even after he goes, he will continue to heckle Biden and try to damage our country by stirring up his cult followers. He’s like a monkey throwing shit around in his cage.

What Could be Done? How About Another Impeachment to Keep Trump from Holding Elected Office?!

The House should impeach Trump once again. This time for his un-American pressure campaign to undermine our free and fair election and his attempt to sabotage the outcome because he lost. The Senate will not have the votes to convict Trump, which takes a 2/3 vote, but the Senate only needs a simple majority to prevent Trump from ever holding elected office again. That would be a worthwhile outcome since Trump is telling people behind the scenes that he wants to control the Republican party and run for president in 2024. I imagine many Senate Republicans who fancy themselves good prospects for 2024 would like to make sure Trump is never again able to launch a presidential campaign.

And so would the rest of us in America who are sane.