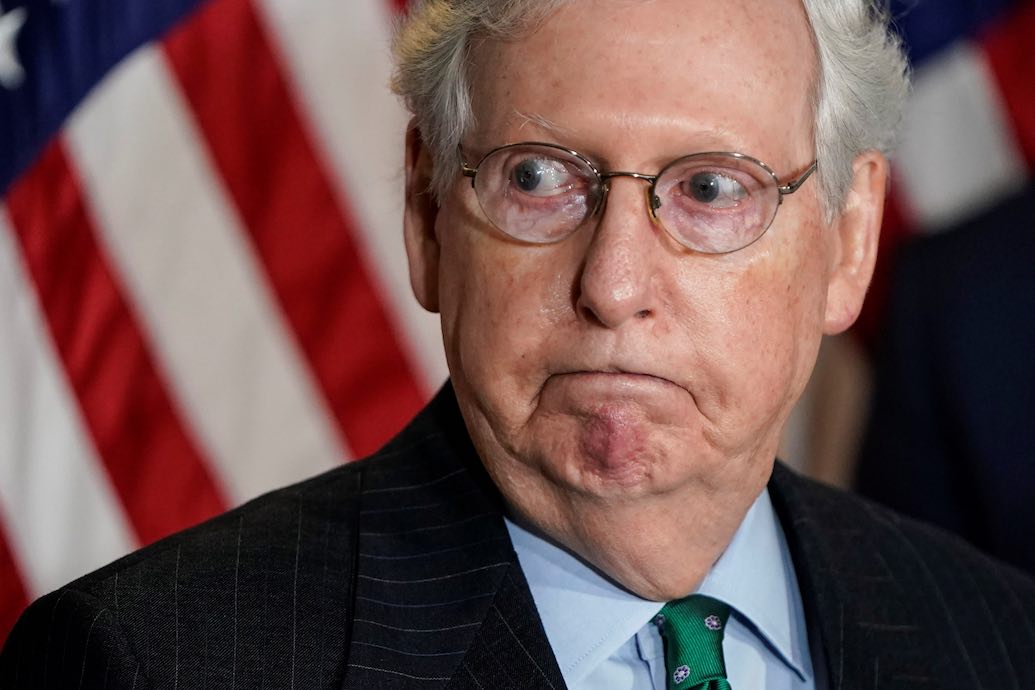 Mitch McConnell won his reelection in Kentucky with ease even though he had low approval ratings.  That means Mitch will be back for another season of gridlock if he is still the Senate leader. He will also do his damndest to delegitimize the Biden administration as he did with Barack Obama. Does this have to be the future of our country- endless gridlock!? Not if we win two more Senate seats in Georgia that will flip the Senate blue. Just two more seats will do it. The hopes and dreams we have for a productive Biden administration are hanging in the balance.

Republicans Loeffler and Perdue are pushing their narrative: that if you vote for Jon Ossoff and Rev. Raphael Warnock there will not be a sufficient check on Joe Biden’s “socialist” agenda and all the great things Trump has done will be undone. (Seriously? what great things? caging kids at the border? tax cut for the 1%?)

It is ridiculous poppycock to think Biden is a socialist, but many Republicans believe he will bolster and create more entitlement programs (affordable health care, a program to help students pay for their education, well funded Social Security, Medicare and Medicaid) that give what they consider “lazy” people (black and brown Americans, students- anyone but themselves!) something for nothing.  That’s what conservatives really mean by socialism. Georgia is still full of people who think like that.

But there are ways to work around this problem, by helping persuadable voters focus on what matters to them even more.

The best way to win in Georgia is to help persuadable Independent and former Republican leaning voters to focus on the pandemic and the swamp- and vote against rampant corruption in DC and the failure of GOP Senators to take the pandemic seriously by voting against Loeffler and Perdue. Ossoff and Warnock are not corrupt and they will help the Biden/Harris administration beat the pandemic.

What Is Being Done to Help the Dems Win in Georgia?

There are a number of excellent initiatives in Georgia that will help Jon Ossoff and Reverend Warnock to get out the vote. Stacey Abrams has worked long and hard and very effectively in Georgia to encourage low propensity voters to have faith that their votes matter. Black voters are finally seeing results when they vote. Fair Fight and other GOTV initiatives have moved the needle. And there are many get out the vote groups, postcard writing efforts, and phone banking under way in Georgia and supported across the nation. Some groups are well funded and supported, while others need more help to be as effective as they could be.

I want to tell you about one that could make all the difference but needs our financial support:

AB was very effective in the Rust Belt. AB quietly and very effectively helped persuadable voters in Michigan, Wisconsin and PA reject Trump. AB did this by reaching out on social media to find people in key, micro-targeted districts who had changed their minds about Trump. (They did not even bother to contact any rabid Trump cult members who watch Fox News and listen to Rush Limbaugh because they are hopeless.) AB understood that if enough persuadable people could be helped to reject Trump, those relatively small shifts could affect the outcome of the entire election in the state. And they were spot on.

Why Was AB PAC So Successful?

AB interviewed people who had “raised their hands” on social media about changing their minds about Trump. They were interviewed and if they had compelling stories, AB filmed their stories. In each film a real person (not an actor or spokesman), someone who could be recognized as a neighbor living in their community, spoke about why they had voted for Trump in 2016 and had high hopes but over time they had changed their minds about him and would not vote for him again.

AB created high quality impactful 30 to 60 second spots that were shown only locally in micro-targeted areas. These ads helped local voters have a “permission structure” to change their minds about Trump. And they did in sufficient numbers to make the difference in Michigan, Wisconsin and Pennsylvania.

This was the right approach to help persuadable people (Independents) solidify their support against Trump and for Joe Biden.

When it comes to persuasion, Americans do not trust anyone anymore except their neighbors and friends. The AB approach is effective because it takes advantage of that fact and uses people who are identifiably local. Each film begins with a connection to the community. For example- an older woman reminiscing about how she and her daughter went fishing at a certain lake that everyone knows is the local place to fish helps the watcher feel connected to a neighbor and helps create the trust people need to know that the message being conveyed by someone who is “one of them”.

AB research and focus groups showed that in those areas where the ads appeared on local TV, radio and digital media, voters had in fact seen or heard them and were affected by these stories from their neighbors. AB watched these voters opinions’ shift away from Trump and to Biden after seeing these ads, paving the way for Biden’s wins in Wisconsin, PA and Michigan.

AB is going to take a similar approach in Georgia, but this time the focus will be on Senate Republicans Kelly Loeffler and David Perdue, the Georgia Senators who could be unseated in this double runoff election. They failed to act to protect Americans from the pandemic and they are part of the swamp in DC that got worse with Trump.

The AB focus in GA is going to be the suburbs in part but more on the rural areas in GA. We think the race is 85% turnout and 15% persuasion and we are very focused on the persuasion side to try to cut our margins in rural areas as we did in the upper Midwest. We will also be looking at voters who voted Trump in 2016 and 2020 but stayed home in 2018 to target.
We’re in the field with our poll right now but we do expect corruption and covid to be key issues. – American Bridge PAC
Call to Action

If you are like me you are pretty burned out when it comes to giving money to causes and campaigns. But this Georgia race is for all the marbles. If Biden could have a working Senate, our country can undo the damage Trump has done. Without it we will continue to be bedeviled by gridlock and Mitch will continue to block the agenda Biden ran on. In short, Biden will not be able to make the changes our country needs.

I hope you will help AB PAC with this initiative. They need our support to gear up fast because the Georgia runoffs are on January 5th, which is right around the corner! Many people are already requesting their mail in ballots. I just donated as much as I could because I know how effective their ads were in flipping the Rust Belt.

Here is their first ad for Georgia.

Please donate in any amount that works for you.  Here is the link: