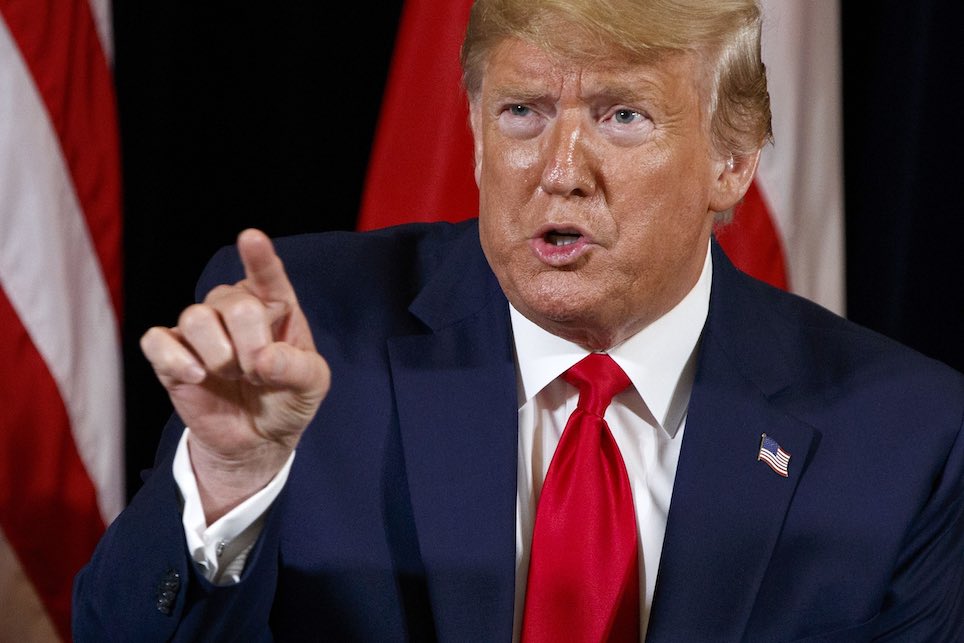 Donald Trump is in an ugly mood. He lost his bid for reelection even after doing his level best to cheat to win by:

1) crippling the post office to make sure a lot of mail in ballots would arrive too late to be counted,

2) ignoring a need to beef up cybersecurity protections,

3) claiming mail in ballots were rigged so his supporters would show up only on Election Day to vote allowing him to claim an early victory before the mail-in ballots could be counted,

4) appointing judges and helping Republican governors who should be loyal to him, and

He did all that and he still lost! He lost while other Republicans down ballot won their elections. Trump is wondering how, after all that he put in motion to assure himself of a win, how could he have lost?

What does losing this election do to Trump’s state of mind given his already delusional thinking?

Answer: it deepens his denial and paranoia.

We are already seeing the effect.

He is looking for fantasy explanations, no matter how far fetched, that explain how he got cheated out of his rightful win. His mind is like a Venus fly trap for cloud Cuckooland conspiracies that help him explain how he really won when in fact he lost.

Trump has been reportedly heard talking to himself in White House like a mad Shakespearian king, saying “I won. I won. I won.” On Wednesday he did a 46 minute rant that no major network carried, only Facebook, which slapped a bunch of warnings all over the post because it was so full of lies. In it he claimed there was no statistical way he could have lost this election. He said absolutely nothing at all about the pandemic that is raging out of control in our country.

Trump’s Team of Left Over Lawyers

There are only a few attorneys left on Trump’s Cheat to Win Team who will do his bidding: Rudy Guiliani, Jenna Ellis Lin Wood, Joe Di Genova, and Sidney Powell (pushing screwy ideas like that the idea that a long dead president of Venezuela booby trapped the Dominion ballot machines to make sure Biden won). These people are part of a dwindling group of loser lawyers indulging Trump’s voracious inner crazy by telling him to press on with the fight because ultimately he will pull out a victory with their help.

We have learned that Guiliani is making a ton of money off of this endless fight ($20,000 a day and a chance to get some kind of preemptive blanket pardon from Trump).

By urging Trump to continue his quest to stay in power, these lawyers are indulging his need to cling to conspiracies like a baby blankie to feel better. Conspiracy thoughts are Trump’s happy place. They keep him from being stricken with what could be an overwhelming depression if he ever has to accept the truth that he was a loser- which he hasn’t yet fully accepted. (Although we also know Trump is planning to pardon his immediate family and friends and even pardon himself. Good evidence that Trump knows this election fight is useless and he and his crime family will be moving on to the next chapter of their lives.)

Trump must be terrified of these feelings he is keeping at bay because he has worked hard and quite successfully to ward them off most of his adult life with unrealistic optimism and the help of sycophants. What he is warding off is the damning rejection of a harsh, critical internalized voice, the voice of his father who hated losers. That is the voice in his head he is trying to keep from surfacing, torturing him, mocking him, enraging him.

Trump’s Denialism Collided with a Brick Wall: the LAW

Any self-respecting lawyers who had been on Trump’s legal team have left at this point because they know this election was not rigged or fraudulent.  It was the safest, least fraudulent in recent history according to Chris Krebs who should know because he was in charge of election security until Trump fired him for telling the truth about what Trump is loudly trying to deny. To be on Trump’s team now is a bridge too far for any lawyer who hopes to have a future career in the field of law. A lawyer’s reputation for ethics and honesty is crucial when it comes to career success.

Even Bill Barr parted ways with Trump on Tuesday. Barr, who said before the election that it’s the winners who write the history books, has figured out who the winners are who will write these history books about the Trump era.  Barr stated that the Justice Department and Homeland Security found no evidence of widespread vote fraud that would change the outcome of this election.

Then he threw Trump a bone by letting it be known that he has created a special counsel role for John Durham to keep the investigation into the origins of the Mueller Report going in the next administration. (Biden’s new AG can review Durham’s evidence and call a halt to that investigation if there is nothing there.) It’s game over for Trump now that Barr will no longer be his Roy Cohn. Trump is said to be thinking about firing Barr. Of course. Anyone who tells the truth gets on Trump’s hit list.

The World Outside Trump’s Fantasy Bubble is Rejecting His Nonsense

Courts of law do not buy conspiracy theories, tweets or fairy tales as evidence. They require facts, data, sworn testimony and hard evidence. Judges, local Republican functionaries, Republican governors, and many lawyers are accepting hard evidence and saying NO to Trump in a way that puts Capitol Hill Republican lawmakers to shame.

Thank you to Van Langevelde (R) of Michigan’s board of state canvassers who refused to go along with Trump’s attempt to bypass the will of the voters and get Republicans to agree to a slate of Trump electors instead of electors that would vote for Joe Biden. Here is what he said:

“We must not attempt to exercise power we simply don’t have,” declared Van Langevelde, “As John Adams once said, we are a government of laws, not men. This board needs to adhere to that principle here today. This board must do its part to uphold the rule of law and comply with our legal duty to certify this election.”

Thank you, Gabriel Sterling (R) in Georgia for speaking out and telling Trump and Republican Senators to call off attack dog supporters who are threatening election workers.

Thank you Brad Raffensberger (R) for putting up with the attempts by Trump supporters to scare you and your family. Thank you GOP Governors Kemp and Ducey for refusing to go with Trump’s attack on democracy by appointing a Trump loyal slate of electors which would have disenfranchised millions of voters. Thank you, Chris Krebs (R), for continuing to tell America that the election was free of fraud and Trump is lying to us. Thank you to Judges who are not being “loyal” to Trump even if they were vetted by the Federalist Society and appointed by Trump.

Perhaps the best illustration of a judge plunging a knife into the heart of Trump’s alternate reality bubble came from Trump appointee and Federalist Society approved, Judge Bibas.  Federal Judge Stephanos Bibas shot down Trump’s legal team’s effort to overturn the will of the voters in Pennsylvania:

“Free, fair elections are the lifeblood of our democracy. Charges of unfairness are serious,” wrote Judge Stephanos Bibas as the court ruled in a case where the Trump campaign sought to invalidate millions of ballots. “But calling an election unfair does not make it so. Charges require specific allegations and then proof. We have neither here.”

What Should We Expect from Trump Next?

It’s a shame that Trump is still president because he can still do massive damage to our country and he will try to do whatever he can to get even with everybody in the few remaining weeks. Trump wants to “punish his enemies”. Revenge. He even wants to hurry up and kill 5 black men and one white woman on death row and is trying to reinstate firing squads and gas chambers to do it.

Trump will try to make life miserable for Joe Biden and his incoming team.

Trump is said to be considering a move to hollow out what is left of the civil service government work force by conducting massive firings of government workers right before he leaves office. Firing as many government workers as he can right before Biden takes over could cripple the Biden administration, satisfying Trump’s need for revenge and would also align with his conspiracy thinking (Trump thinks these people are the “deep state”).

Trump will also attack Republicans who were insufficiently loyal to him: Bill Barr, Governor Doug Ducey, Governor Brian Kemp, Chris Wray and Chris Christie. There will be others he thinks betrayed him by following the law, the facts, and the truth instead of siding with him in his attempted coup.

Trump’s denialism could affect the outcome of the Georgia run off elections. Lin Wood and Sidney Powell are in Georgia telling Republicans there NOT TO VOTE! The election is rigged. Trump will be doing a rally in Georgia Saturday and many Republicans are worried about what he will do to damage Loeffler and Perdue in his quest to prove he was cheated out of his own bid for reelection even while they advanced to the runoff election. The interest of Trump to keep up his self-serving lie runs counter to the interests of these two incumbent Senators who need Georgia Republicans to get out and vote for them. Remarkably, many Republican voters in Georgia are saying they are not planning to vote since the election is rigged and the rigged machines will give the Dems the win anyhow. Why bother to show up to vote?

Let’s hope Trump supporters are so steeped in Trumpian cult thinking that they keep believing that the voting system was hopelessly rigged against Dear Leader and stay home on January 5th. That would be a very nice present for incoming Joe Biden- a Senate that actually works for the good of the American people instead of being mired in endless gridlock thanks to Mitch McConnell. 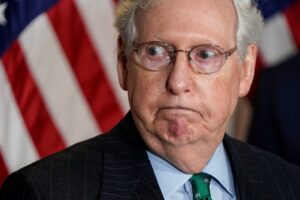 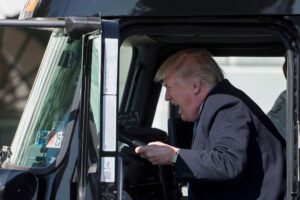