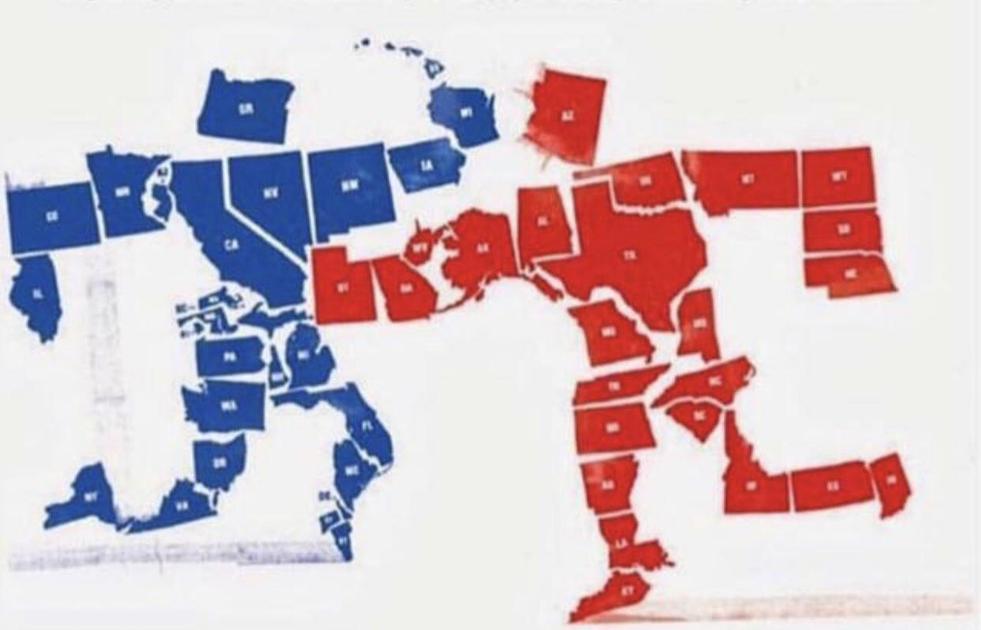 The Covid Partisan Divide is Dangerous

99.5 percent of the people who died of covid-19 in the past six months were unvaccinated (Rochelle Walensky CDC Director)

Who or what is responsible for this divide when it comes to Covid?

Much of the divide comes from Trumpian America choosing unreliable news sources that cater to their wishes and fears. Too many people living in red states like Wyoming, Mississippi and Missouri listen to conservative sources of information and do not trust mainstream media. Fox “news” hosts like Tucker Carlson and others on so-called conservative media are giving listeners garbage for news. The idea that these outlets are conservative is a joke. They sure aren’t trying to conserve their viewers.

These are radical, right wing sources of disinformation and propaganda. You have to wonder if conservative outlets are working for Antifa because if viewers and listeners believe the propaganda they are getting from conservative media, they will continue to be vaccine resistant and they WILL eventually get sick with the Delta Covid variant because it is 50% more transmissible than the original Alpha type and they could die or get serious long haul symptoms that could ruin their lives.

Hey, Rupert Murdoch! Tucker Carlson! are you TRYING to kill off your viewers or ruin their lives? Seriously!

Tucker Carlson escalated his attacks on COVID-19 safety during his show Tuesday evening, arguing incoherently, and without any apparent irony, that [vaccine passports] are equivalent to racial segregation, or as he put it, “medical Jim Crow.”

Speaking on the subject of vaccine passports during the June 1 episode of “Tucker Carlson Tonight,” Tucker said that just over a year ago — “way back then before the revolution,” as he put it — “pretty much everybody agreed that segregation was the worst thing this country ever did. Forcing certain categories of citizens into separate lesser accommodations barring them from public places, treating them like lepers, untouchable, that was completely immoral and wrong.”

What Carlson doesn’t say in his rant is that Covid is a highly transmissible airborne virus. You can get it by breathing the air exhaled by the infected person near you whether or not that person has symptoms. Obviously this is the reason people who refuse to be vaccinated are dangerous to others. They are eventually going to get this virus and they are going to expose anyone who is near them just by the mere act of exhaling.  Comparing that to segregating Black people from White people is a bogus comparison.

States and regions that are full of people (mostly Republicans) who refuse to get vaccinated or are too fearful to get it or are sure they are too healthy to get this virus will likely become breeding grounds for Covid as the Delta variant gets going even more. You could say that people make personal decisions and if they get sick that’s their personal problem. They choose to be deluded. But it isn’t just their problem. The longer it takes for our country to get close to herd immunity, the more likely Covid variants can develop in the petri dish of unvaccinated humanity. That could threaten everyone eventually– even people who have been vaccinated. It will depend on whether a new strain, a new variant, evolves that can evade the vaccine. In short, people who are vaccine resistant or hesitant or rebellious not only expose themselves and their loved ones to this illness, they threaten the progress all of us have made to protect ourselves, defeat the virus and get back our normal lives.

Some Republican governors are trying to break through to people who are not vaccinated in their states.

We already have two types of America. This is just more evidence of that.

What does this mean for 2022? Usually if the mood of the country is positive about the current administration, the incumbent party wins . When approval is at or above 42% that bodes well for the party in power. Biden’s recent approval rating was 56% to 60% according to Fox news and other reliable polls. Trump’s approval malingered around 37% during his presidency. Trump’s low approval rating and GOP subservience to Trump was a big factor in GOP losses nationally. Republicans lost the House in 2018 and the presidency in 2020 as well as narrowly losing the Senate.  If these good numbers continue for Biden and his administration, you would think they would be a strong positive indicator for 2022 for  Democrats in their effort to keep the House and add to their Senate numbers. But maybe not.

But Do the Norms Still Hold?

The problem is that we are in a new world brought on by fear mongering and the underlying worry that too many white Americans have about changing demographics. Republican led state legislatures are rapidly passing laws that undermine convenient voting. Many of these new state laws will make it harder to vote for everyone but especially people of color and young Americans.

What the Supreme Court’s recent decision ruled allowed Arizona laws to stand that make it harder to vote. Specifically, the Court seems to use 1982 as a benchmark year since that was the date the Voting Rights Act was last amended. If a state imposes a restriction that burdens voters but they still have the same ability to vote, for example. by showing up at their polling places as they did 40 years ago, or by being able to vote by mail in some way shape or form, that seems to be ok with the Supreme Court’s majority. States can play around with limits on more convenient ways to vote and even if those restrictions affect people of color more than white people the Court is ok with that.

But there are also new laws being passed in some Republican states that go beyond just making it harder to vote. Instead, these laws will make it possible to overturn the will of the voters. Some of these laws shamelessly grant the state the power to put partisan election officials in charge of election administration, allow partisans to be present in the polling places (inviting voter intimidation) and empower partisans to overturn election results they do not like. These laws are not just troubling, but terrifying. They are truly un-American and undemocratic. They represent the partisan divide and deepen the divisions in our country.

If we cannot get the Senate to modify the filibuster and pass S 1 or S 4, these new laws would need to be struck down by the courts. It is hard to believe the Supreme Court would allow such laws to stand because they will detonate our free and fair voting system, the bedrock of our democracy. The Supreme Court needs to have a case come up for review of that specific issue, however, to get a ruling. We may not get that ruling in time for the midterm election.  If states can overturn the will of the voters in battleground states, that would create chaos in our country. It could also end our democracy.

These voter suppression laws and the assault on who gets to have their vote counted are part of the radical right wing shift in our country that makes our partisan divide so dangerous. Too many Americans have been co-opted by an authoritarian, neo-Nazi movement. Trump and many Republican lawmakers have amplified and accelerated that movement. Republicans in state legislatures are joining Team Sedition. The insurrection on January 6th was the shocking expression of that movement bubbling to the surface.

Instead of Rejecting Trump Many Americans Chose to be Radicalized

What happened after the assault on the Capitol? At first it seemed Republicans rejected Trump and blamed him for the insurrection. But it did not take long for Kevin McCarthy to fly down to Mar-a-Lago to get on Trump’s good side so that he could have a shot at being the next Speaker of the House. That was the moment the GOP pivoted and went all in on Trump and Trumpism, which is in point of fact is a neo- Nazi movement.

Eric Lutz has written a good piece in the Atlantic about what has happened to us and where we are as a country today.

[T]he Capitol attack should have been a galvanizing and clarifying moment, one that brought Republicans back to the center and rallied Americans to buttress the shaken pillars of democracy. Instead, Republicans have institutionalized Trump’s fiction: They’ve translated the rioters’ cries into state voter suppression laws and partisan “audits.” They’ve worked to ameliorate the events of that day in the nation’s short political memory. And they’re seeking to capitalize on the sense of grievance they’ve nurtured in their base to keep and gain power. Democrats, meanwhile, have attempted to hold the line—often admirably—but have largely struggled to match their counterparts’ intensity and coordination, and a recent ruling by the conservative-majority Supreme Court has only made matters worse. January 6 should have been the low point of Trump-era politics. But the unhappy truth may be that democracy is in even greater peril now than it was six months ago. (Read Eric Lutz’ article in Vanity Fair, July 6, 2021.) https://www.vanityfair.com/news/2021/07/trumps-insurrection-is-gaining-steam-six-months-after-capitol-attack?)

We must not be paralyzed by our worries. We need to act as if this is a five alarm fire because that is what it is.

If you care about preserving our democracy, push your Senators to permit filibuster reform. NOW. Then and only then will the Democrats in the Senate have a shot at countering the radical state legislation that undermines free and fair elections by passing national legislation.

If you care about preserving our democracy, support reliable sources of news. Support Media Matters for America because that nonprofit watchdog group is working to expose Fox hosts like Tucker Carlson and other so-called conservatives who are undermining our democracy.

Send a donation to Marc Elias, Democracy Docket, because he is the guy with the legal team that is bringing lawsuits across the country to challenge these new voting restrictions. He along with the DOJ will be mounting the constitutional challenge to state laws that need to be struck down.