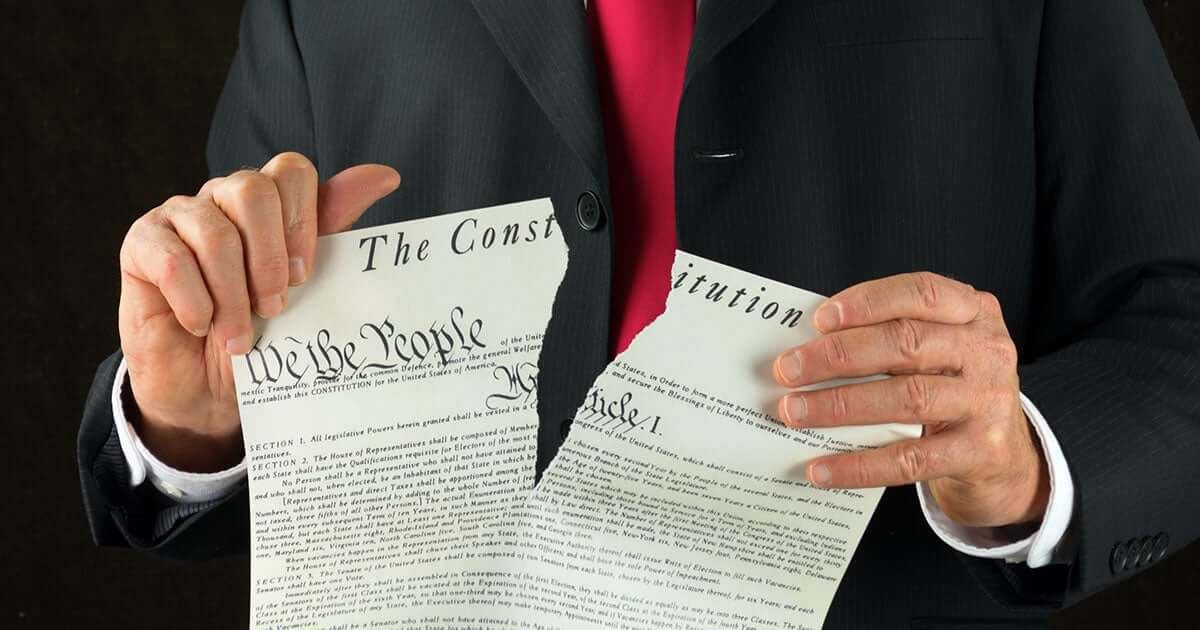 According to SB 8, Texas’ anti-abortion law that punishes anyone supporting a woman or girl who gets an abortion after 6 weeks gestation, a fetus is an unborn child at 6 weeks.  According to SB 8: “Unborn child” means a human fetus or embryo in any stage of gestation from fertilization until birth.” Most other anti-abortion laws also assume the fetus is an unborn child that has rights including the right to be protected by a government empowered to act to prevent the fetus from being allegedly “murdered” (aborted) by a woman or girl who is pregnant and her doctor.

Whoa. Hold on a minute. Let’s go back to the foundational idea here. Who says a fetus is an unborn child at any time after fertilization?  What if I don’t believe that fundamental religious concept? What if that thinking runs counter to MY deeply seated religious ideas or belief system! How about MY religious freedom!? Different religions have different ideas about when a fetus crosses over into personhood. The same is true for atheists and their nonreligious belief systems. Why does this Texas anti-abortion law and so many others like it get to push a Christian based religious viewpoint down everyone’s throat?!

If a pregnant woman believes what is inside of her is not yet a child, then removing it is a medical procedure not a murder.

Abortion beliefs depend on a persons’ religious beliefs.

Jewish law, for example, does not subscribe to the belief that fetuses are unborn children.

An unborn fetus in Jewish law is not considered a person (Heb. nefesh, lit. “soul”) until it has been born. The fetus is regarded as a part of the mother’s body and not a separate being until it begins to egress from the womb during parturition (childbirth). In fact, until forty days after conception, the fertilized egg is considered as “mere fluid.” These facts form the basis for the Jewish legal view on abortion.

The pivotal question then becomes this: When does a blob of protoplasm become a PERSON the state can step in to protect? The answer depends fundamentally on a person’s religious ideas. Not everyone has the same religious ideas about this magical moment of transformation from nonperson to personhood. This matters. In fact I believe it should be at least one of the leading arguments made to the Supreme Court in the upcoming Mississippi anti-abortion case that would prohibit abortions after 15 weeks and that the Supreme Court is going to hear arguments about in the upcoming session.

This Argument Has Been Raised Before

[A]s [Peter] Wenz argued in a 1992 book declaring abortion rights to be a matter of religious freedom, the definition of fetal personhood is wholly dependent on religious beliefs. So if the government endorses one particular conception of when life begins, it is arguably violating the Establishment Clause by favoring certain religious viewpoints over others—or religion over non-religion, for that matter. [The Atlantic] https://www.theatlantic.com/politics/archive/2016/03/abortion-rights-a-matter-of-religious-freedom/471891/

Texas and other states that attempt to limit abortion based on fetal personhood are establishing a law that is, by its very definitional language, unconstitutional, because it forces people who do not believe a fetus is a person to conform to a religious tenet they reject based their own deeply felt and believed religious or atheistic grounds. For this reason alone anti-abortion laws like SB 8 are unconstitutional. They run afoul of the First Amendment Establishment Clause because on their face anti-abortion laws establish a preferential Catholic ideology of fetal personhood in the womb as the religious belief system everyone is forced to accept as true even though the belief is not accepted as true by millions of people.

The First Amendment to the U.S. Constitution says that everyone in the United States has the right to practice his or her own religion, or no religion at all. … The Establishment Clause of the First Amendment prohibits government from encouraging or promoting (“establishing”) religion in any way.

In other words, Texas Law SB 8 is an imposition on the religious freedom of everyone living in Texas including the Uber drivers who could be fined for taking pregnant women to get an abortion, or the counselors who are advising women or the doctors doing the procedures.  I don’t see any way around that. Fetal personhood is just not part of a religious belief system for everyone and if you believe in it, that’s because your religion planted that idea in your head. If you think a fetus is a person at 6 weeks and you are pregnant, no one is going to force you to have an abortion. But if you do not believe that a fetus is a person while in utero, why is it ok for the government to force you to carry to term against your will based on a religious idea you do not believe in?!

The Bias of This Supreme Court

Choose Arguments that Appeal to the Biases of the Justices

When I practiced as an Assistant US Attorney, we always factored in the biases of our judges. We knew certain judges favored certain ideas and principles and thought certain ways. In fact we could generally predict the outcome of the case once we knew the facts and learned which judge had been assigned to the case. This is true of all justices. They are just people. They think their ideas about life, religion, governmental power and the like are the right way to think, the correct way to see the world.

Therefore, we need to present arguments to the Court that align with the justices’ world views. This Supreme Court is hyper aware of religious freedom. It is a mistake not to present this court with the compelling argument that anti-abortion laws violate the Establishment Clause (religious freedom), because it is probably the most compelling argument that could be made to this Court. Even if the argument is rejected by this Court, if the public became more aware of the idea it could influence the electorate to be more open to allowing women to make their own decisions about abortion based on their personal religious beliefs.

Roe v Wade Relied on Privacy To Its Detriment

The mainstream view that was enshrined in the Supreme Court’s decision in Roe v Wade was based on the right to privacy, but that decision was also attacked because there is no right to privacy articulated in the Constitution unlike a right to religious freedom. Nonetheless, Roe determined that despite a right to privacy, the government had an interest in and an ability to intervene in a private choice to abort based on which trimester was involved.

According to Roe, the fetus is essentially protoplasm in the first trimester. The fetus is a bit more protected by government in the second trimester. The government can intervene more in the third trimester because the protoplasm is supposedly “viable” then (able to live outside the womb). Viability helped the Roe court give itself a structure for government intervention. But viability does not mean everyone thinks that the fetus has a soul yet or a that the fetus is a “real person” yet. That is a religious/ philosophical question that depends on your beliefs or your religious ideas.

If you carry the thinking of Roe v Wade to its logical conclusion, you run into trouble because if the the state has a compelling interest in protecting fetal tissue, it could, by extension, have an interest in legislating access to birth control too. That is just a little bit earlier protoplasm the state might think it should get into the business of protecting.  Why doesn’t that early protoplasm have a right to become a real little boy or girl?  By that thinking, how can you deny a fetus the right to be born by using birth control? And taking it a step further, how can you deny sperm the right to meet an egg to fertilize?  With this thinking it might someday be against the law for men to masturbate. Oh, I forgot, these laws are intended to control women and girls, not men. Well, even if prohibitions against denying sperm the right to life is a bridge too far, is the religious right really going to try to prohibit birth control?

Crazy thinking, you say?  Think again! This is exactly where the religious right is going with its anti-abortion efforts. Once Roe is overturned they will step up their efforts to deprive us all of birth control. No lie. This is coming.

A government never knows more than a woman or a girl about her readiness for starting or continuing to bear a child or have a family.  The decision to bring a baby into the world is a decision the woman or girl has to make with her partner, her doctor and herself, not the government in the state she happens to be stuck living in. It is a question of economic and emotional and even physical readiness. The government should have no input in that whatsoever.

The religious right vigorously objects to government intervention when it comes to a vaccine or getting a gun. They believe in First Amendment freedoms. Well then, it is totally inconsistent to permit intervention in the most private and personal of all decisions of a pregnant girl or woman about her own body and her own life. The government should never ever have the power to force a woman or girl to carry to term against her will whether or not the pregnancy is the result of rape or incest. That is enslavement. That could  endanger the life of a woman or girl. That is Handmaid’s Tale stuff.  Sure, abortion should be a privacy issue, but SB 8 and other anti-abortion laws are also in violation of the Establishment Clause of our Constitution. Everyone has a right to their religious beliefs.

Abortion Rights ARE a Matter of Religious Freedom- Make the Argument!

This is a radically right leaning Supreme Court that we can assume has 5 to 6 out of 9 members of the religious right sitting on it.  This Supreme Court will not uphold Roe v Wade when they hear the next anti-abortion case out of Mississippi limiting abortion to 15 weeks.  Lawyers need to argue that anti-abortion laws constitutionally violate our religious freedom enshrined in the First Amendment. Anti-abortion laws violate the Establishment Clause of the Constitution by endorsing a Christian religious viewpoint about when a fetus becomes a person. Under our Constitution that is impermissible.

These 9 justices might really understand that argument and if they do not, the public might get it and push back against the religious right. In any case, this argument needs to be made to the Court and made to our country as well.