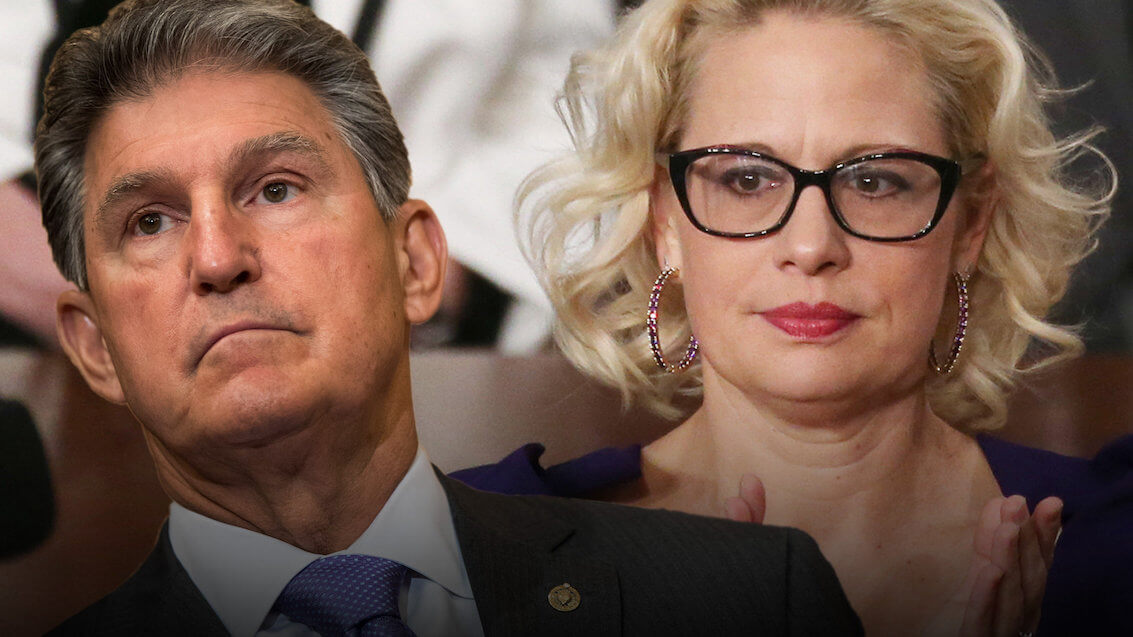 For Starters, Kyrsten Sinema Has Turned Into a Vampire

When Sinema ran for the Senate she really seemed to be a progressive. She stood for liberal causes like climate change legislation and programs providing support for the neediest Americans. Her campaign ads were about health care for all and she talked about her own family of origin needing help. After winning election, however, she has morphed into a woman on a mission… a mission to enrich herself and stay in power with the help of corporate interests.

Sinema is one of two Democratic Senators (Manchin is the other) standing in the way of Joe Biden’s Build Back Better Plan. She is currently rebelling against the wishes of her party and her constituents to support the human infrastructure BBB reconciliation plan that could actually make America great again.  The White House met with her four times last week to try to understand why she was so opposed to passage of the Human Infrastructure bill that all Democrats and Biden ran on to get elected. Biden’s team tried to learn the reasons for her resistance and opposition, but she continued to be vague about what she finds unacceptable in the plan and unable to quote a dollar figure she would be willing to agree to. Maybe what she is really unwilling to accept is anything that will disappoint the corporate interests that have become her besties. These groups are on a mission to kill Biden’s agenda like a liquid Terminator on a search and destroy mission to keep our country from having a progressive agenda. They have found Sinema to be a willing acolyte and poured close to a million dollars into her campaign coffers.

Sinema was bitten by corporate vampires and now she has become one of them.

Accountable.US, the liberal nonprofit group, has compiled a report of donations to Sinema from organizations like the U.S. Chamber of Commerce and PhRMA, groups actively working to trip up the reconciliation package, a key pillar of Biden’s domestic policy agenda.

The report tallies that Sinema has received “at least $923,065 from the industry groups leading this charge against the Build Back Better budget or from the individual corporations these groups represent.” The report centers on five interest groups: the U.S. Chamber of Commerce, the Business Roundtable, the RATE Coalition, the National Association of Manufacturers, and PhRMA.

“Super-rich corporations have given Senator Sinema nearly a million reasons to vote against making them pay their fair share in taxes,” Kyle Herrig, president of Accountable.US, said in a statement. “Make no mistake, if she sides with her wealthy donors and kills popular investments to jump-start the economy, everyday families—including across Arizona—will pay the price.”

The donations went through three committees for Sinema: Kyrsten Sinema for Congress, Sinema for Arizona (her Senate campaign), and Getting Stuff Done Pac (her leadership PAC). Some of the donations in the report also go as far back as 2012, long before Biden was elected president and began pushing his Build Back Better Agenda. It’s also before Sinema completed her transformation from uberliberal Arizona Green Party activist to the John McCain–worshipping outspoken moderate who’s more than happy to buck her party’s agenda.

Joe Manchin is also stonewalling the Biden legacy human infrastructure package that would help the people of West Virginia, his constituents, have far better lives. Manchin’s constituents are overwhelmingly in favor of this bill, with Republicans, Democrats and Independents in his state supporting it by an astounding 81% (with 77% support from conservatives in that state) even though Trump beat Biden in West Virginia by more than 33 points.

Why is Manchin opposing the passage of this bill that is overwhelmingly popular in West Virginia?  It isn’t too hard to figure out. Take a look at his connections to the fossil fuel industry.

Democratic Sen. Joe Manchin of West Virginia, who has in his own words “never been in a liberal in any way shape or form,” is currently holding up the $3.5 trillion reconciliation bill that central to President Joe Biden’s “Build Back Better” domestic agenda.

But he’s also likely to hold back any further action to combat the climate crisis, which could impact his million-dollar investments in the coal and energy industries.

Manchin told CNN in July that he was disturbed by aspects of the $3.5 trillion reconciliation bill, including provisions that would target the fossil fuel industry.

“I’m finding out there’s a lot of language in places they’re eliminating fossils, which is very, very disturbing, because if you’re sticking your head in the sand, and saying that fossil (fuel) has to be eliminated in America, and they want to get rid of it, and thinking that’s going to clean up the global climate, it won’t clean it up all,” Manchin said. “If anything, it would be worse.”

As The Guardian reported in partnership with the Center for Media and Democracy in July, Manchin himself founded a private coal brokerage in 1998 called “Enersystems.” Though currently run by his son, Manchin still owns as much as a $5 million stake in the company, raking in $500,000 of income from it in 2020 alone. As of late 2019, Manchin was by far the most invested of any senator in “dirty energy.”

Manchin serves as chair of the Senate Energy and Natural Resources Committee, which oversees the coal industry as well as “global climate change.” As Sludge reported in early July, Manchin told the 2021 annual conference of the Edison Electric Institute in June that “coal-fired plants are being unfairly targeted by environmentalists.” [Insider]

And, Hey! Why Aren’t Republicans Getting Blamed? They Deserve the Blame!

If the human infrastructure bill doesn’t pass, then the Dems will have a serious problem winning their House seats back in 2022.  Of course that’s just what the GOP wants. These guys are disgusting. They will do ANYTHING to undermine Biden and the Dems even if that also undermines the success of average Americans and damages our country. All Republicans care about is keeping power because they are shrinking. They are becoming a minority party.

In 2020 the Dems promised the American people it was worth it to wait for hours in line to vote, and to risk getting Covid to get rid of Donald Trump and get the progressive agenda they want. The BBB act includes lots of things that Americans, including Republicans and Independents, really want: universal pre-K, child care, climate action, affordable housing, immigration reform, expanded Internet connection and lower drug prices.. Americans came out to vote in record numbers for this.

If the Dems cannot get this act passed because of Republicans and two Democratic Senators who are behaving like Republicans, voters will be demoralized, which is exactly what Republicans want to have happen. They want a demoralized electorate that is cynical and hopeless about getting the change they need from their government. Demoralization along with all of the voter suppression bills in key battleground states including the power to overturn elections if Republicans lose, will mean a victory for the Joker in Metropolis. If Biden’s legislation doesn’t get passed, progressive voters and persuadable Independents are likely to give up and stay home in 2022 and 2024. That’s how Trump gets back into power.

Failure is Not An Option

There are many pro-democracy groups active now and fighting back. Pro democracy groups understand that Republican state legislatures are shamelessly working to stay in power using unfair, gerrymandered maps even in districts that have turned more diverse and trend progressive and would vote Democratic. The National Democratic Redistricting Committee and Mark Elias are about to go to battle to challenge unfair maps in states with Republican legislatures across the country.

Failure is not an option.

For this reason, the BBB bill will pass eventually. Biden and the Dems will keep at it until it does.  And even though it will not be 3.5 trillion over 10 years, it will still be a truly remarkable investment in our country and in the people who need it most. Biden was never going to be FDR with transformational agenda because he has a House and Senate with such small majorities. The real solution to tepid progress is to elect more Democrats to the House and Senate. Only then will a progressive agenda be truly viable. This BBB plan will pass and it will be seen as a down payment on the future. It will pass because it must.

If you are sick of all the yammering about who is to blame and worried about what will happen with these bills, just turn off your newsfeeds. Skip all the ugliness of the sausage making process being played out in front of us so that cable news can keep its ratings up because so many of us are outraged and worried.

What Can We Do Instead?

Instead of spending time and energy outraged or worried, we can get active.  We can support groups that are threatening Sinema with a primary opponent if she doesn’t represent her constituents’ wishes and needs. Krysten Sinema is acting like juvenile, self-centered diva with an Instagram account instead of a Senator who cares about her constituents. She needs to remember who elected her. Go to the crowdfunding link below and contribute so she might remember who she hired her for this job she is messing up.

Arizona activists have launched a crowdfunding campaign to raise money for a potential 2024 Democratic primary challenger to Sen. Kyrsten Sinema if she does not vote to end the filibuster or continues to obstruct President Joe Biden’s agenda.

As for Manchin, get active calling Manchin’s constituents in West Virginia to urge them to complain about Joe Manchin and push him to do what the people of West Virginia want him to do– pass the BBB act. Here is the link. https://www.mobilize.us/commoncause/event/376178/