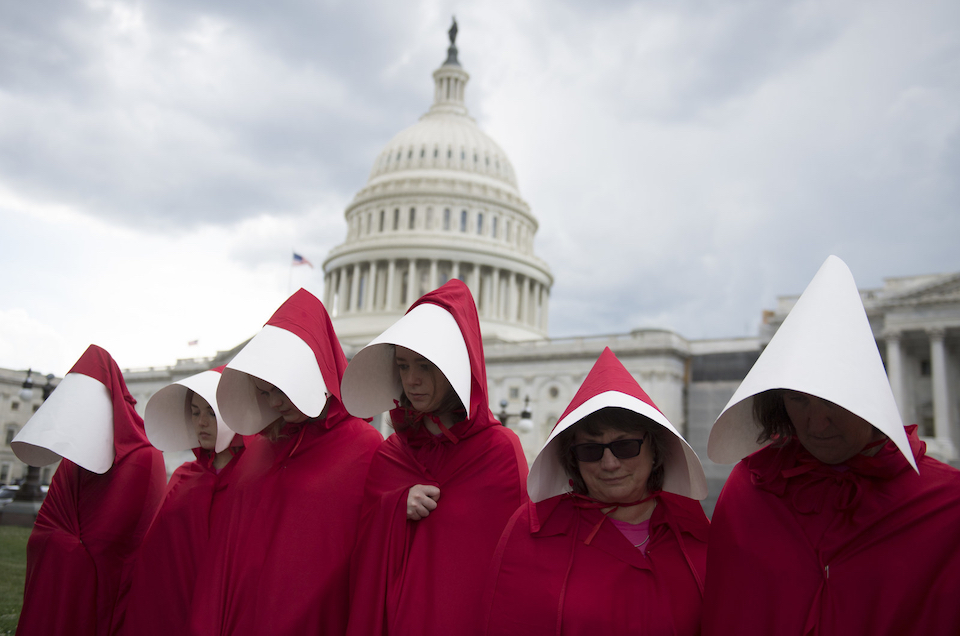 When Dobbs becomes the law of the land, reproductive rights legislation will be left up to the states. The coming Supreme Court decision will allow religious zealots (Republicans) who have worked hard to win seats in state legislatures to instantly transport everyone living in these states in the “way back” machine to the pre-Roe era.  These red states have “trigger laws” on the books that will literally trigger an immediate return to the law in that state governing abortion before Roe took effect. Each state legislature will also have the option to choose whether or not to impose their own versions of draconian anti-choice laws that could punish abortion providers, and/or women who abort a fetus, possibly even the Uber drivers who take them to get a procedure. Many state legislatures are already passing these laws in anticipation of the end of Roe: Texas, Florida, Mississippi. Some of these laws are ready to go or being readied right now.

Our country is about to be transformed. And not in a good way.

Because of the Dobbs decision, we are in for a pitched battle over reproductive rights in every single state of our country. Republicans are suddenly worried about the mid-terms because they thought they could make the conversation about Biden’s failures. Now voters are going to be upset about reproductive rights and many will vote with that issue front and center.

Polling tells us that close to 70% of Americans want to allow women to have control of the choice to have an abortion at least in the first trimester. After that there is waning support for absolute control by the woman and more concern about the fetus or unborn child which means the state can intervene to protect it. That’s why Roe v Wade was a good opinion. It reflected the views held by most Americans and tried to be even handed about the interests of the woman and the interests of the unborn shifting over the course of a pregnancy. But because the rabid religious right, which represents extremist views when it comes to abortion, is over-represented in many state houses in America today (making waves even in Illinois which is a blue state), we are likely to see over the top anti-abortion legislation in many red states including total bans on abortion and fetal personhood laws at the time of conception. These laws will likely offend most Americans.

Get Ready for Some Awful Laws From Republican States

We can already see the bills that the “antis” are gleefully passing or teeing up to pass in their state houses. Many anti-choice state laws will be immediate and cruel:

Anti-choice laws undermine a woman’s economic independence. In Republican led anti-abortion states where extremists have power, women without access to abortion will no longer be able to plan when to have their families and will not be able to plan their futures. Mothers who cannot afford to have more children will be forced to have more children.

Alito’s opinion also undermines the right to privacy and equal protection for people who are not mainstream white, heterosexual and male. The opinion opens the door for any state legislature to engage in discrimination of all kinds Only Republican states will write and pass legislation that undermines civil and reproductive rights. What is coming are major disparities between red states and the blue states when it comes to human rights, civil rights, and reproductive rights. We are already the divided states of America but we will become the even more divided states of America after this opinion becomes the law.

How will Americans respond to this state by state realignment of rights?

Ours is a country full of people who deeply believe in personal liberty and free choice. Over one million Americans are dead from Covid today. Many of these people were influenced by Trump and Republican Covid denialists. They refused to get vaccinated or wear a mask because being told what to do by their government offended their sense of personal freedom. If state legislators think they can tell women what they can and cannot do with the most intimate private parts of their anatomies, their wombs and uteruses, especially after the #metoo movement when millions of American women expressed their outrage at unwanted touching… this dictatorial intrusion will be seen as way worse.

I don’t see how this goes well for Republicans.

Even though the rabid religious right-wing Republicans believe they just won their 50 year battle against abortion and are ready to break out the champagne, they may be in for a surprise. They could be about to discover that they just condemned their red states to being loser states when it comes to economic success.

Think about it. No woman who wants to have a career and/or raise a family (and that is most women and men who care about women) will want to live in a red state that has usurped a woman’s deeply personal right to choose what to do with her body. After 50 years of relying on this fundamental right to decide what to do with their own bodies, most women who want to have careers will not take kindly to losing this right even if their companies will fly them to California or New York or Chicago to get an abortion. Depending on how overbearing and intrusive the laws are in each state, women and the men who love them may be motivated to move out of state to avoid living in a backwater where women are treated like second class citizens.

For that matter, no one who is gay, or “of color” will feel safe in red states that are deconstructing their civil rights. No man married to a woman who has a career will want to live in a red state that does not protect his wife’s right to choose what she does with her body.

Is a migration coming? Maybe.

We might see a migration from red to blue states as highly educated, capable, progressive people with talent, skills and creativity that make them especially valuable to the work world flee from red to blue states. Similar to the migration of talented people leaving Russia because of Putin’s war on Ukraine and repression of free speech. After all, who wants to live in a backwater state that denies women and men equal rights, liberty and the freedom to choose? If this migration does happens, it will result in the loss of talent in Republican states that have chosen the 17th century over the 21st century.

In the past, most Democrats and Independents have been relatively uninterested in state legislative races. Most people didn’t even know who their state legislators were.

This is about to change.

With every state writing its own rules that will deeply affect the liberty, freedom, and rights of their citizens, Americans will intensely care about who those state legislators are and will vote and work to help Democrats to win state legislative elections. Republicans have proven they cannot be trusted to protect civil rights, voting rights, reproductive rights and human rights.

In purple states that are teetering on the verge of turning blue, this decision by the Supreme Court could become the force that tips the state legislature blue as worried women (and men) in the suburbs, exurbs and cities rise up to vote in the mid-terms and presidential elections. There is nothing like fear to inspire voting. Trump created a huge blue wave. The loss of the right to make decisions about your own body and the coming loss of civil rights and human rights will predictably trigger another blue wave that could be big even without Trump on the ticket. We will see.

Recent polling shows tells us that Americans already care a lot about this issue.  73% of Americans are closely following the news out of the Supreme Court about abortion rights. 71% of Democrats say they are more motivated to vote, but only 44% of Republicans. Just wait until we start to get horror stories about a 13-year-old girl raped by her mother’s boyfriend who is being forced to carry that unwanted pregnancy to term against her will. Or the woman who got pregnant accidentally and could die if she carries to term but is being forced to do so against her will and the advice of her doctors. The Handmaid’s Tale may be coming to the state you live in unless that state is firmly controlled by Democratic legislatures, governors, secretaries of state and attorneys general. More Americans will be motivated to elect Democrats to insure their rights are protected.

What Can Be Done?

When a political party goes too far to the extreme, there is backlash.

State houses in battleground states need to be helped to flip from red to blue. One important group that is ready to help flip states from red to blue is the States’ Project. https://statesproject.org

This group has been hard at work already for many years. It knows how to find strong Democratic candidates to run for office in the most “flip-able” battleground states: teaches them how to campaign and helps them with financial support. Arizona is an example of a state that could be flip-able. If there are just two more Democrats in each chamber, Arizona will no longer be a red state. It will become a blue state. No more idiotic Cyber Ninjas recounting ballots in Arizona that have already been recounted and squandering millions of taxpayer dollars to do it.  And there are other states that might shed their regressive red state legislators as well: Michigan, Texas, Pennsylvania, Wisconsin, and other states.

Senator ELIZABETH WARREN of Massachusetts… acknowledged that Democrats held control in Washington but were nonetheless “in an uphill battle for change.”  The moment, she said, demanded leaders ‘who know how to get in the fight and who know how to win.’”

Because of the Dobbs decision, there will be a pitched battle over reproductive rights in every state of the country.

The political terrain is about to change because of Dobbs. We don’t know how much just yet. But activism could make a big difference right now to influence election outcomes.

There is work to be done. Doors to knock on. People to call. People to drive to the polls. Letters to the editor to write. We have to get out the vote. Here is the message we need to say over and over and over again:

A vote for any Republican is a vote against our country, our democracy, our human rights and our right to choose. Vote ONLY for Democrats! Republicans Can’t be Trusted.

Governors are the backstop for our democracy: Democratic Governors Association (DGA)

If you live in Illinois be sure to vote in the primary and the general election for only Democratic Supreme Court judges. Nancy Rotering is running in the Second District. She has been an active supporter of reproductive rights for women for many years and would make a terrific Illinois Supreme Court judge. If Republicans win those judgeships Illinois, despite all the work and effort to make the state safe for women, would be in danger of losing the fight for reproductive rights– even in that so called “safe” state. These judgeships are crucial in Illinois!!

Join the fight and make a difference.

How to Fix the Supreme Court