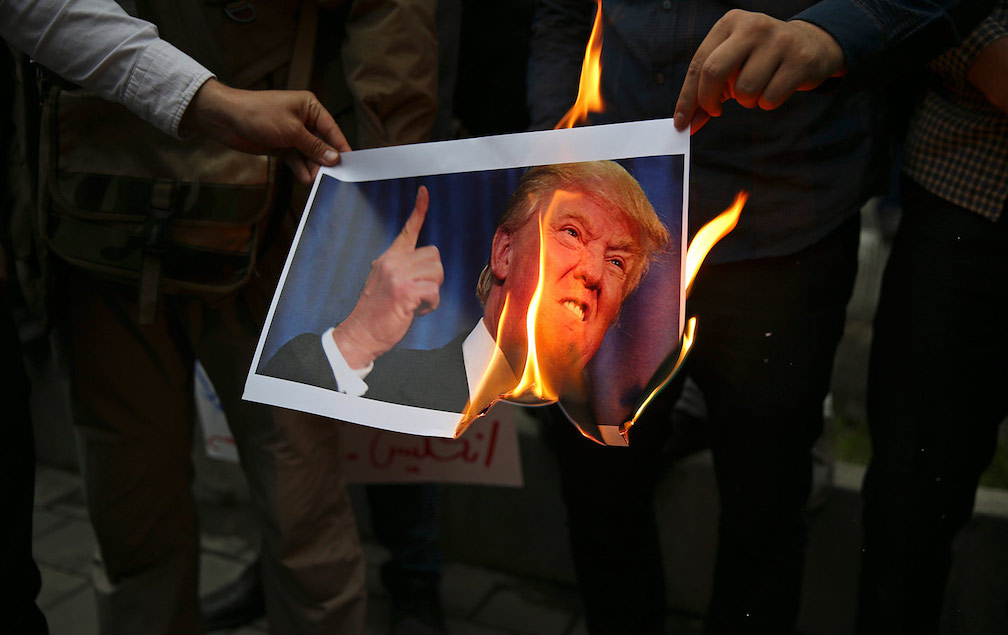 Trump’s grip on the Republican Party seems to be burning itself out thanks to the revelations of the January 6th committee. Yes, he still influences primary choices in some states more than others. Alabama is still more in love with him based on their primary choices, but Georgia has fallen out of love with him based on theirs. Each state is different, but Trump is not the force he was before when he was President and on Twitter with his grievance megaphone all day and night. Rupert Murdoch, The Wall Street Journal, Peggy Noonan and other conservatives are moving on from Trump to other people. https://www.vanityfair.com/news/2022/06/desantis-fever-is-spreading-across-murdochs-media-empire

The extraordinarily effective Jan 6th hearings are exposing the real Trump to America and the world: his obsessions, corruptness and brutality for all to see. The fourth hearing put a human face on the suffering Trump and his gang imposed on ordinary Americans who were trying to live their lives and do their jobs to the best of their abilities but got in Trump’s crosshairs as he tried every trick in the book and not in the book to stay in power. This hearing was another hit to Trump’s image and will shake the faith of the GOP in his ability to lead them to victory in 2024. Where are the Republicans stepping up to defend Trump’s actions? Nowhere. Crickets.

What Came Out in the Fourth Hearing

The fourth hearing showed us that when election officials and ordinary Americans who were election clerks in places like Fulton County, Georgia, did not go along with Trump’s pressure to overturn the election in their states, they were terrorized and subjected to a barrage of phone calls, emails and threats by Trump, his allies and the MAGA mob. Trump’s MAGA mobs showed up at their homes and hounded them, pushed their way into the home of a relative of a Georgia election official in one instance, terrorized their children and threatened their lives. Trump supporters have become Trump’s functional brown shirts. They carry guns. They issue threats and make demands to force people just trying to do their jobs to obey Trump, break the law on his behalf, and do whatever necessary to keep him in power. As we have seen, these people attack Congress when they don’t get their way.  I think this knowledge will be a breaking point for many Independents who leaned Republican who have supported Trump and forgiven him before.

Americans who believe in free will and fairness are not going to take kindly to Trump’s attacks on average, ordinary Americans. Americans can see Trump is a vicious, power hungry man, desperate to stay president at any cost. If the fourth hearing did anything, it proved convincingly that Trump’s claim of a stolen election was total bullshit. Even Rudy Guiliani himself confesses to Rusty Bower, speaker of the Arizona state legislature, that they have “a lot of theories but no evidence” of voter fraud.

The Fourth Hearing was Profoundly Moving

Rusty Bower was a great witness. His love of the constitution and democracy was clearly as fervent and deep as his religious convictions. He had wanted Trump to win but he knew the reality in his own state: Trump had lost the election in Arizona to Biden. I think his words will be remembered like those of Joe Welch in the McCarthy hearings “You have done enough. Have you no sense of decency?” Those words marked the turning of the tide in the McCarthy hearings. I suspect this line from Rusty Bower could mark the turning point for Trump and his illegal, unconstitutional campaign to overturn our free and fair election in 2020 that Trump lost:

“I do not want to be a winner by cheating.”

Bower also said the efforts by Guiliani and other Trump allies to overturn the election without any evidence of vote fraud made him think of : “The gang that couldn’t shoot straight. A tragic parody.” His refusal to play along, to “just do it and let the courts sort it out” as Guiliani urged him to do, resulted in a campaign of pressure and terror directed at him by Trump. 20,000 emails and voicemails and texts. People pressuring him at his house and office. He was called a pedophile (the Trump supporters favorite attack on people who don’t toe the line), accused of being corrupt. He worried about the effect of all of this on his gravely ill daughter who was upset by all of this at the time. She  died shortly after the January 6th assault on the Capitol. You could see Bower struggle not to cry when he said this in the hearing.

Perhaps the most moving witness of all was Miss Moss, the election worker in Fulton County Georgia for over 10 years whose life was upended by Trump, Guiliani and the MAGA mob.

Moss’s and Freeman’s emotional testimony capped a riveting hearing, the committee’s fourth so far, that focused on Trump’s pressure campaign on state and local officials to reverse his loss in a half-dozen contested states. The mother and daughter, in particular, revealed in searing detail the cost of Trump’s baseless accusations about the 2020 contest on the lives of rank-and-file election workers, many of whom have described violent threats.

“It’s turned my life upside down.(Moss testified)  I no longer give out my business card. I don’t transfer calls. I don’t want anyone knowing my name.” She added: “I don’t go anywhere with my mom. I don’t go to the grocery store at all. I haven’t been anywhere at all. I’ve gained about 60 pounds.” And she testified: “I don’t do nothing anymore. I don’t want to go anywhere. I second-guess everything I do. It’s affected my life in a major way. In every way. All because of lies.”

Trump also attacked Freeman and Moss personally in a phone call with Georgia Secretary of State Brad Raffensperger (R) just days before the Capitol attack, mentioning Freeman 18 times and describing her at one point as a “professional vote scammer and hustler.” The Washington Post obtained a recording of the call and published it last year.

The threats and harassment that ensued even reached Moss’s grandmother, who called one day, screaming, to say people had knocked on her door and, when she had opened it, had tried to push into the home in search of Moss and Freeman. Moss recounted how awful she felt telling her grandmother, “who likes to get her steps in walking around the neighborhood,” that she had to stop exercising outside for her own safety. At night, pranksters “continuously” sent pizzas to her home that the delivery drivers expected her to pay for, Moss testified.

There were also moving accounts from other Americans, mostly Republicans, who were subjected to Trump’s vendetta aided by Team Crazy and the MAGA mob. Brad Raffensberger, Georgia Secretary of State, was a compelling witness. He testified about Trump’s obsession with Georgia. Trump’s claim “They defrauded us out of a win in Georgia” resulted in a review of the votes three times, a 100% hand recount of some 5 million ballots, and 300 investigations all concluding that Trump lost and Biden won in Georgia. Raffensberger explained Trump’s loss this way: 28,000 (Republican) Georgians skipped the presidential race when they voted. That was a direct slap in the face to Donald Trump.

Gabriel Sterling was another powerful witness. He was outraged when he learned that one of the tech workers helping them in Georgia with the election tabulation was being hounded and threatened by the MAGA mob with text messages and images of a noose. This tech worker was a first generation American and he was terrified. Sterling called a press conference and directly warned Trump to cut it out saying “Someone’s gonna get killed.” That was prescient.

If there had been more Brad Raffensbergers, Gabe Sterlings and Rusty Bowers in Trump’s inner circle our country would not be in the mess we are in now. There were and still are way too many Republicans willing to humor Trump and comply with his Captain Ahab-like crazed obsession to stay in power. Thoughtful Republicans should be asking themselves how they can continue to align themselves with a liar, a cheater, a phony, and a wannabe dictator. But I don’t think they are. Instead, I think they are laser focused on calculating their chances to win back the presidency and majorities in the Senate and House and are starting to see Trump as a liability; an albatross, a detriment, instead of their best chance to win again.

Nearly six in 10 Americans think former President Donald Trump should be charged with a crime for his role in the Jan. 6 attack on the U.S. Capitol, according to an ABC News/Ipsos poll.

The same portion of Americans (58%) think Trump bears either a great deal or a good amount of responsibility for the events of Jan. 6, the June poll revealed.

60% believe the committee is conducting a fair and impartial investigation. Similar numbers, 58%, believe that Trump bears a good or great amount of responsibility for the events of Jan 6 and that he should be charged with a crime.

That poll was taken before the 4th hearing. I look forward to seeing more polling as these hearings continue. The Jan 6 Committee is  taking direct and lethal aim at Trump and the blows they are delivering are potent.

One reason they are so effective is that the presentation is made for TV and for the American appetite for finding out the story, the who really did it and what did they do?  Americans love CSI and shows about who was the real murderer. Cliffhangers. The Jan 6 Committee is doing a great job of teasing the public and presenting a strong case that resonates with people. When you tell the true and factual story of what happened, the curtain is lifted and Trump is the clear villain. His lust for power and his brutality are showcased and in full view.

For some Americans these hearings are changing their minds. I hear from friends and Markin Report readers about how, for the first time, their fathers, uncles, and others who voted for Trump in 2016 and again in 2020 have had a sudden change of heart. They don’t talk about why. They don’t say they feel bad they supported Trump. They don’t say they made a mistake. They just suddenly, out of the clear blue sky, say. “I don’t know how anyone could possibly support that guy anymore.” It’s hard to confess you made a mistake. And maybe there’s no need to do that. If more Republicans and Republican leaning Independents break with Trump in whatever way that works for them, that is a good thing.

This is how Trump ends. He flames out. He ends with embers and ash.

Even if Trump is toast that does not mean we are out of the woods as a country. The right wing extremist MAGA mob is still there. Team Crazy is huge. It has taken over the GOP. We have a long road ahead to overcome the MAGA party: a party of grievance, anger and fear. The GOP has become an antidemocratic party. Breaking news is that the Supreme Court just overturned Roe and Casey. This is the result of an extremist right wing GOP that is hell bent on taking our country back decades. Every state is going to become a battleground.