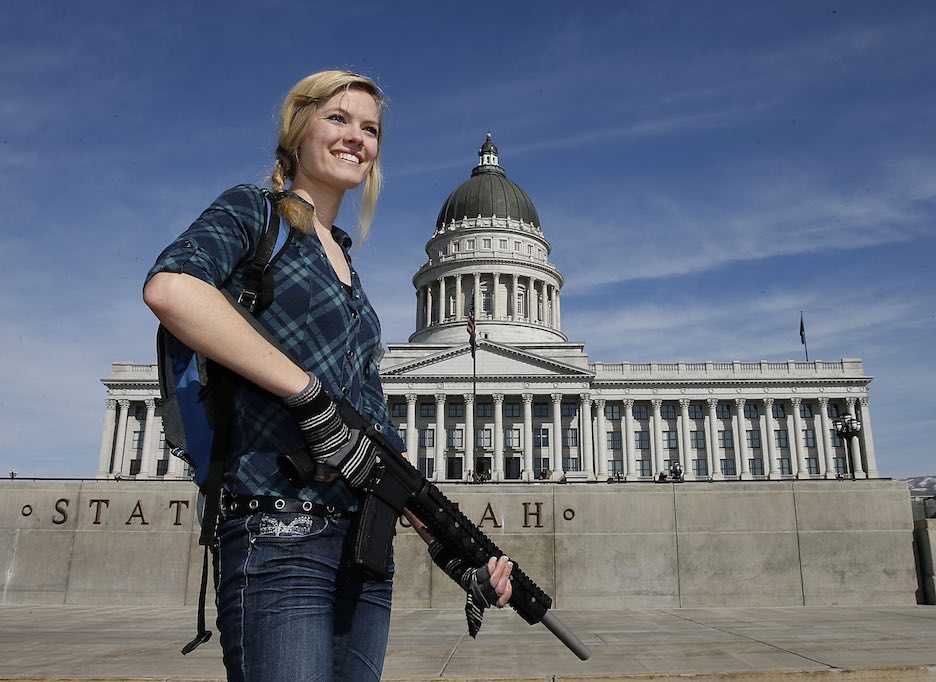 Highland Park, Illinois, was the quintessential American town with lovely homes, leafy shade trees, a quiet friendly little downtown with shops and restaurants and a mixture of people with many backgrounds. Some say it was reminiscent of Mayberry. It was thought to be a very safe place to live and raise a family.

On the Fourth of July it became a war zone- the scene of a horrible massacre.

Who Was Bobby Crimo III?

The shooter, Robert (Bobby) Crimo III, was a slightly built young man who at one point had been an aspiring rapper with a following in the millions who idealized gun violence in his online postings. The images he posted of himself on social media show a young man who looks agonized and tortured. A Wikitubia write up reported that in 2016 he used the name “Awake” which was also tattooed on his forehead. His rap music gained over 3 million streams but was abruptly removed for “unspecified reasons”. In December of 2017 he released a mix tape. After that there was a second mixtape in 2018, Observer, including the revealingly titled hit Love Me Even Though I Don’t Love Myself. In October 2018 he released his hit single On My Mind which had over 4 million streams about his attraction to a “fat girl”. In September of 2018 Awake’s Spotify had 100,000 monthly listeners. After gaining this cult following he disappeared from the music scene.

Crimo was also a Trump supporter. He attended numerous rallies and there is a photo of him obtained by Newsweek at a Trump rally dressed as “Waldo”. Trump has embraced white supremacists and militant angry right wing activists which has poisoned our political dialogue and given rise to hate crimes. His rallies are a petrie dish of aggrieved people that offer a haven and sense of community to people like Bobby Crimo.

The 21-year-old man charged with seven counts of first-degree murder in the mass shooting at a July 4 parade in Highland Park once attended a Donald Trump rally dressed up as the character from “Where’s Waldo”.

The Crimo family was part of the Highland Park/ Highwood community. The murderer’s father had run for mayor and owned a White Hen Pantry store in the town. Crimo went to school in Highland Park.  The mayor of Highland Park, Nancy Rotering, knew Bobby Crimo when he was a little boy in the Boy Scout Troop when she was the den mother. But the family had numerous incidents that were cause for police intervention. When Crimo was 2 years old his father left him alone in a hot car according to a police report. The parents were divorced and it was an acrimonious divorce. Police records show numerous visits to the home in response to fights between the parents.  According to a former neighbor, Crimo’s mother was a flamboyant woman who was also a stripper.

Two of his close friends from high school said that he was a quiet kid but never violent. They mentioned that he and his brother were often the last kids picked up after an activity or after school.  According to these friends Crimo’s personality reportedly changed in some way when one of his best friends died from an overdose and a girlfriend rejected him.

Crimo had come to the attention of the local police before. Officers had responded in 2019 after someone reported that he had tried to kill himself. And they came to his home a few months later — seizing a knife collection — after a family member reported that he had pledged to “kill everyone.”

Still, in the years since, the man, Robert E. Crimo III, 21, was able to legally buy several guns in Illinois, including a high-powered rifle that officials said was used in the attack on Monday in Highland Park, a lakefront suburb north of Chicago. On Tuesday, Mr. Crimo was charged with seven counts of first-degree murder.

Crimo obtained his rifles legally but needed the help of his father to get a FOID card because he was underage at the time. You have to wonder. If your kid threatens suicide and says he plans to “kill everyone” and police remove his large assortment of swords and knives and after that you help him get a FOID card so he can buy high powered rifles, then maybe you need to take a good hard look in the mirror and ask yourself what the hell you were thinking.

On July 4th, 2022, he became a mass murderer in his home town.  7 people dead, forty others injured, a two year old child left without parents, a man dead who left Mexico for the safety of America, and countless other people’s lives ruined.  He has confessed to the mass murder. It was also reported he confessed that he drove to Madison, Wisconsin, and considered a second massacre there with the high powered rifle he had in the car but he didn’t carry that out. On the rooftop of the store where he positioned himself for the planned attack, police found 83 spent bullet shells and three magazines which he left when he fled the scene dressed as a woman to escape in the crowd. He  dropped the rifle that was used to trace him as he was fleeing the scene.

The End of Mayberry in America

Highland Park is very close to the northern suburb where I live. I personally know the mayor, Nancy Rotering, and Congressman Brad Schneider, who represents Highland Park also represents the village where I live. I know Highland Park very well. I know the shop where Crimo climbed to the roof for his planned massacre. I shop in that town and know people who live there. For the most part, this is a tightknit community full of good people who care about each other. If a massacre can happen in Highland Park–and it obviously can and did, then it can happen everywhere and anywhere in America.

Why Doesn’t Our Government Keep Us Safe?

Why don’t Americans have a right to be safe? Isn’t that what our government is supposed to do?! Isn’t that their job?! Our government must be willing to stand up to the NRA and push back against the idea that a good guy with a gun will stop a bad guy with a gun. No they won’t. There were plenty of armed good guy police at that parade and they couldn’t stop the massacre.

We also need the courts to be on board with reasonable gun control. This radical right wing Supreme Court is not. Just as the bipartisan national legislation passed Congress and was signed into law by Biden, the Supreme Court undid New York’s efforts to keep weapons out of the city of New York by broadening the right to carry weapons outside the home. That is pure insanity! The three Trump appointed radical right wing justices along with Thomas, Alito and Roberts are busy deconstructing our democracy in many ways. They are at it again with this recent decision about guns.

Bobby Crimo was another one of a string of alienated young men we are seeing in America these days with troubled families or backgrounds who hide their pain or stifle their rage only to turn to gun violence to express their anger in mass murder. There have always been troubled angry people in the world and there always will be. But they have not had the relatively unfettered access to weapons of war that Americans have today. Why are we allowing nihilistic, Trump supporting, radicalized, destructive people access to AR-15s and other high capacity weaponry?

Here is the answer: Republican legislators who are in bed with the NRA and the gun rights lobby and munitions industry. Yes, there are a few Democrats who have a good rating from the NRA too. But the biggest impediment to change right now are extreme right wing Republicans who are blocking the change we need to be safe. They failed to do the most important thing that needs to be done right now! Today!

They failed to ban assault weapons.

When assault weapons were banned for a decade we did not have this level of domestic terrorism and mass murder on the streets of America. Any politician who does not vow to ban assault weapons should be voted out of office. Enough!!

Republicans have become extremists standing in the way of progress in our country on public safety, climate change legislation, human, civil, voting and reproductive rights. The GOP is no longer a true political party. It has become a right wing political cult.

Don’t just vote. Vote with a purpose. Republicans have to know what they stand for is rejected by America before they will change their ways.

Vote Every Republican OUT!!!