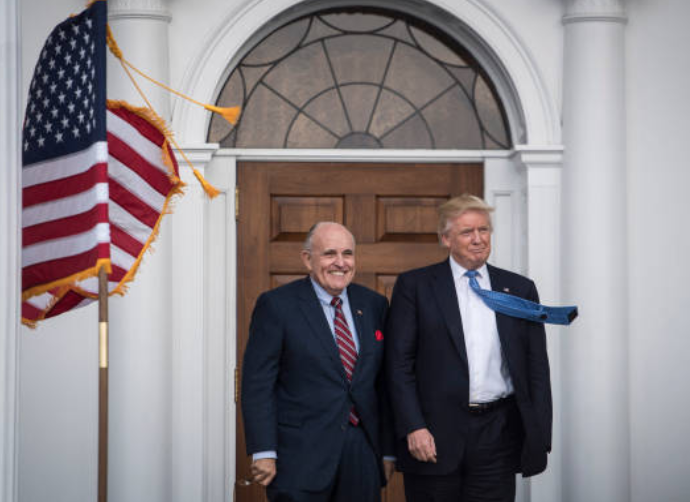 Rudy and Donald are our current version of Laurel and Hardy. Remember them? The equivalent of Dumb and Dumber in the 1930’s. Stan Laurel was Oliver Hardy’s hapless sidekick. The two of them hatched stupid plans together. Something always went wrong because the plan was flawed from the beginning and the joke was that Hardy always blamed Laurel for the mess. “Look at the fine mess you’ve got us into now!” Hardy would accuse Laurel as Laurel hung his head and played with the rim of his bowler hat. Of course, Hardy was as much to blame as Laurel. What was hilarious was seeing how stupid they both were.  It was also funny to see Hardy  blame his hapless sidekick for Hardy’s own dumb ideas.

Rudy and Donald are our current Laurel and Hardy or Dumb and Dumber. How they got into this fine mess was that they got together over dinner and concocted a PR reveal that they told no one else about. I know Trump doesn’t drink but I don’t know about Guiliani.  No matter.  The idea they cooked up seemed like the kind you would get after having one or two too many. It must have sounded great at the time. But just wait until you wake up the next day.

Rudy has not practiced law in many years. And we already know that Donald Trump does not read. Anything. But maybe someone should have read the laws related to campaign finance violations before hatching this benighted PR scheme. They are our Laurel and Hardy so that was the plan they hatched, chuckling to themselves in the Oval Office.  But we get the last laugh.

Meanwhile, the White House communications team did not know about this planned reveal. The White House legal team did not know about this planned reveal. Guiliani booked HIMSELF on Sean Hannity without letting anyone else in on the fact that he was going on the show. During the interview with Hannity, Rudy laid out the plan they’d hatched. He also did what Rudy (and Trump) always do. They improvise. They jazz it up. They speak off the cuff, like they are sharing a secret and speaking to you confidentially. If you watch Sean Hannity’s interview you can see him trying to give Rudy opportunities to clean up the messes he’s making on air but Rudy is oblivious. He confidently freewheels his way through the interview.

What did Rudy do to damage Trump’s legal matters? Two big things.

Second, Guiliani also helped Mueller establish Trump’s intent to obstruct in the firing of James Comey. Remember when Trump spoke to Lester Holt in that now infamous interview in which Trump talks about how he wanted to fire Comey because that whole Trump Russia thing was made up? That goes to evidence of intent. Trump wanted to end the Russia probe and firing Comey would get him that result, he thought. Erroneously. But that was what he thought.

Guiliani waded into that dumpster fire and added more fuel to the fire. Guiliani said that in Trump’s interview with Lester Holt, Trump said he got rid of Comey because Comey would not give him assurances that he was not a target.  That is not actually what Trump said.  We didn’t lose the video of Trump talking with Lester Holt.  If Guiliani thought that was a brilliant way to get Trump off the hook for intent to obstruct, he should have his license to practice law revoked. Not only did he mischaracterize the evidence we can all see and hear for ourselves in the actual taped interview with Lester Holt, if Guiliani did anything he added more evidence of intent:  Trump was interfering with and trying to stop an investigation he was afraid of and his intent was corrupt, not innocent or uninformed.

Welcome to the new Dumb and Dumber.

After Trump realized that Guiliani’s appearances on Fox were a disaster for him, he threw Guiliani under the bus and then rolled the bus back and forth a few times. Guiliani, Trump tells us, is just a newbie to the team and just started a day or two ago.  (Another lie.  Trump is currently logging in at 3,001 material lies since he took office.  He’s working hard to keep up the pace).

And for more entertainment value think about this: Michael Avenatti is our new Bugs Bunny! Trump is Elmer Fudd. As Avenatti runs circles around Trump and taunts him on Twitter, Trump (Elmer Fudd), falls for the tricks every time. “Where are you, you wascully wabbit?”  Over here, Mr. Fudd. Over here.