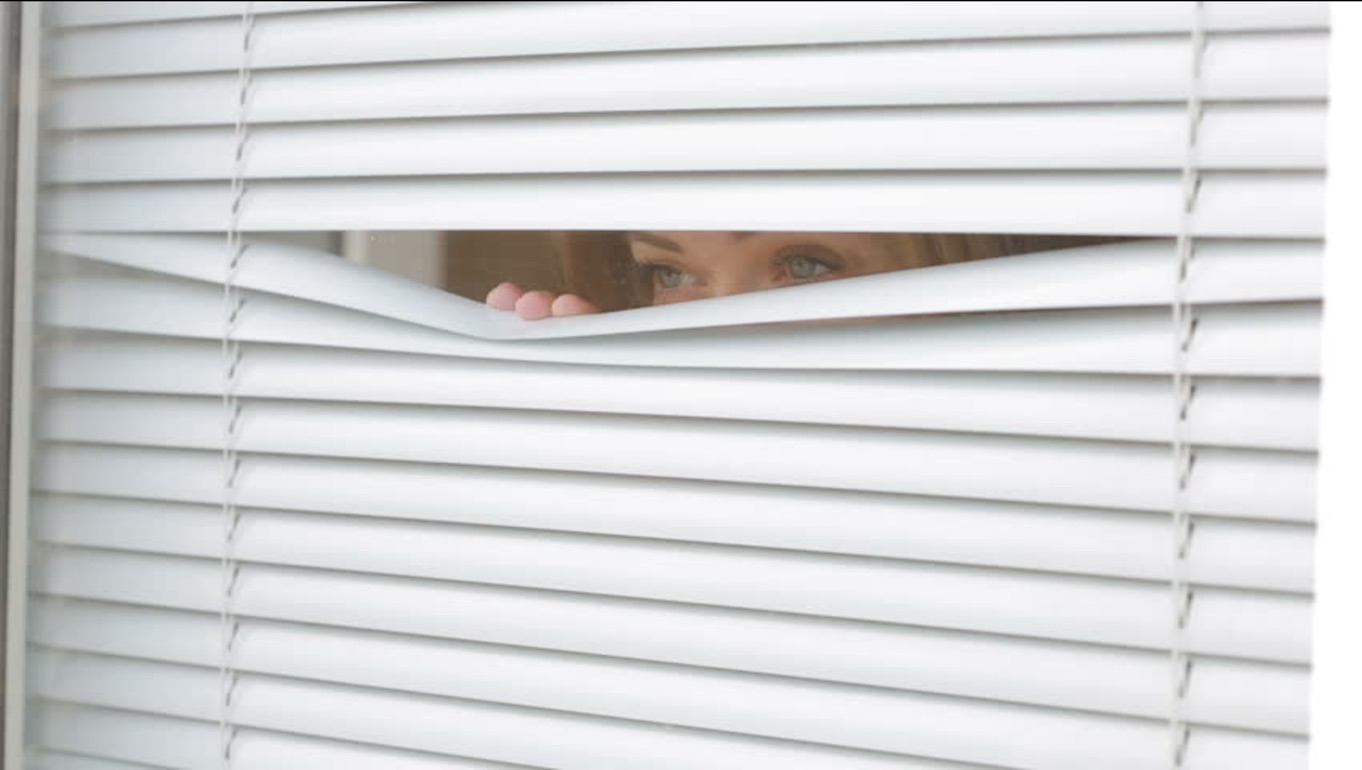 Alfred Hitchcock’s thriller, Rear Window, was the suspenseful movie about a man who is hampered and unable to move because of an injury who spends much of his time, while he is recovering, watching the doings of people in the apartment building across the way from him through the rear window of his own apartment.  The watcher is played by actor, Jimmy Stewart.  He sees what he thinks is a man murdering his own wife, but it is hard to see clearly through the window. He cannot see everything happening inside that apartment from his limited vantage point. Over time, though, as he continues to watch, there appears to be mounting evidence that could indicate a murder, although other people assure him it is nothing, nothing at all. Eventually, however, his girlfriend goes over to the apartment of the suspected murderer and enters the scene, finds the wedding ring of the dead wife and is able to show that to her boyfriend through the window before she is arrested for unlawfully entering the apartment.  The murderer, however, now realizes that Stewart is a witness to his crime and he comes over to Stewart’s apartment to kill him to save himself from being arrested and convicted of murder.

We are watching Trump through the rear window and the evidence is mounting.

On Friday, December 7, there were four important court filings that are helping us see more clearly what happened to our country as Trump worked in the shadows to become president:  defying the law and wrangling his way to the highest office in the land by cheating and lying and putting himself and his own financial interests above the interests of the country.

The important take-aways from these four filings can be summarized as follows:

Manafort got his plea agreement ripped up because he lied about a number of important (“material”) things including his contacts with a Russian spy, Konstantin Kilimnik.  This tells us that team Mueller has independent evidence of those contacts between Manafort and Kilimnik.  They do not need Manafort to prove up that relationship and what happened there beyond a reasonable doubt.

Perhaps the more important lie was that Manfort told Mueller’s team he was not communicating with the Trump team, but he was.  Manafort was the mole for Team Trump.  This is something we already knew because Rudy Guiliani gloated about it.  “Ha ha ha, we got the inside scoop about what the Mueller investigation was looking into and what they knew, because our snitch told us.”  But I want to raise a possibility here as I have in a past blog post that Mueller’s team already knew Manafort was a snitch and they were ok with that.  If they allowed Manafort to think his untruthful version of the facts was consistent with what the investigation had uncovered, even though the investigators had other evidence not revealed to Manafort, Manafort would have been backchanneling erroneous information to Team Trump.  Then when Trump filled out his written responses, he locked himself into answers consistent with Manafort’s version that were lies and probably lies that are easily contradicted by evidence already in the possession of Team Mueller.  I’m betting that the double crosser got double crossed.  It raises the possibility that other members of Trump’s White House and legal team were in on the effort to double cross Mueller’s investigators and could eventually face charges of conspiring to obstruct justice.

Next, the sealed Manafort filing tells us there is an active ongoing investigation into matters not ripe to expose to the public.  It may be that there are Trump family members involved or Trump himself.  Or not.  We just do not know.

Next, in the Mueller team filing about Michael Cohen’s cooperation we learn some important new information.  In November of 2015 Cohen spoke with a Russian who said he was a “trusted person” in the Russian Federation and that he wanted to offer the campaign “political synergy” and “synergy on a governmental level.”  Synergy is not a legal term, but it is an almost perfect descriptor of a mutual relationship between entities with enigmatic, connected and similar goals.  That is an even better way of describing collusion, and an even better way of portraying the relationship and yearnings Russia had with Trump and his campaign comingled with the yearnings Trump had with his business interests and goal of becoming president.  Putin enticed Trump with the promise of Trump Tower Moscow, but to get it they would have to partner together to get rid of sanctions so that Trump could get funding from a sanctioned Russian bank.

The Russian who spoke with Cohen proposed a meeting between Putin and Trump and part of the plan would be to help Cohen help Trump build a Trump Tower Moscow. Cohen at one point suggests that Trump meet with Putin while Putin is in New York attending the UN General Assembly meeting.  In the fall of 2015 Trump and Putin compliment each other and launch their bromance.  Now we know why.  As Trump was gaining traction as a candidate, Putin was getting more interested in creating this “synergy” with him.  Putin called Trump “colorful and talented”.  Trump said Putin was “a leader, unlike what we have in this country.”  From these details in the sentencing memo we can see that Trump’s team was reaching out to Russians and the Russians were reaching out to Trump’s team.

The sentencing memo from Mueller tells us that Team Mueller is happy with Cohen’s assistance in Russiagate, so it is very likely that Cohen has said much more but Mueller is keeping it under wraps until he is ready to do the big reveal, which I think is coming fairly soon because so much seems to be coming to a head in these investigations.

By way of contrast, the SDNY was not at all happy with Michael Cohen’s level of cooperation.  In fact, they want to throw the book at Cohen for failing to help them more.  They ask for a substantial term of imprisonment for Cohen.  This filing runs close to 40 pages, and it also contains a rallying cry for democracy.

In this filing we learn how Cohen became Trump’s fixer.  We learn how Cohen cheated and broke the law in a variety of ways: giving false statements to banks to get loans, tax evasion for money coming in from his taxi medallion business and selling his influence with Trump once Trump is elected president.  The most damning for the president is that Cohen implicates Trump directly in two felonies, two schemes to catch and kill the damaging stories of two women who alleged they had sexual relationships with Trump before he ran for office and whose stories could have dashed his hopes to become president had they come out right before the election.

We have already heard about these two women: Karen McDougal and Stormy Daniels.  But what is new here is the reaction of the SDNY and their assessment of the seriousness of this crime in which the president himself is implicated as the person Cohen says, he “acted in coordination” with and who “directed” him to break the law.

It should be noted that the Trump Organization was also involved in this criminal campaign violation activity, paying Cohen a large sum of money which, ostensibly, would have been used for more hush money or catch and kill operations as needed.

The SDNY sentencing memo talks about how Cohen sought to influence the election from the shadows, deceiving the voting public by hiding alleged facts that he believed would have had a substantial effect on the election.  The memo goes on to talk about how Congress worked hard to prevent just this kind of  unfairness, where rich and powerful people can brazenly violate election law and gain political advantage.  These sorts of activities erode faith in our institutions and increase the cynicism of the public.

“Taken together, these offenses reveal a man who knowingly sought to undermine core institutions of our democracy.” The recommendation is for a “substantial” prison sentence to promote respect for the law and afford adequate deterrence.

Those words, written about Cohen in this memo, are equally applicable to Trump.  Trump was the person who directed the criminal acts carried out by Cohen.  Trump worked in coordination with Cohen to provide him money and access to David Pecker of AMI to kill the stories, also mentioned in this sentencing memo.

Trump is unmistakably “Individual 1” in the memo, which makes it hard to see how Trump and Sarah Sanders can continue to pretend that there is still nothing to see here.  If you read these sentencing memos with the understanding that when the US Attorney’s Office and DOJ file documents with the court, they base what they allege not on flimsy or partial evidence as might happen state side, but on evidence beyond a reasonable doubt, there is no way the SDNY would have filed this sentencing memo with its embedded implications about Trump if there was not underlying evidence beyond a reasonable doubt established not only by witness testimony but documents, emails, texts and/or other corroboration.

So where does that leave us?

We are, like the Jimmy Stewart character in Rear Window, still looking through the window and having trouble seeing what is going on.  We think there has been a crime committed and we are trying to see and understand what has happened, but we are limited in our ability to do that.  As in Rear Window, Trump has committed some crimes, probably more than the two we know about now, in an effort to get himself elected.  Will he get away with it?  Witnesses to his participation in the crimes who speak out about it will be imperiled if Trump finds out they are speaking out about it.  Trump will try to keep his grip on the presidency while the evidence that is going to bring him down is slowly revealed to us in the public domain.  We will watch through our widening window to the truth.