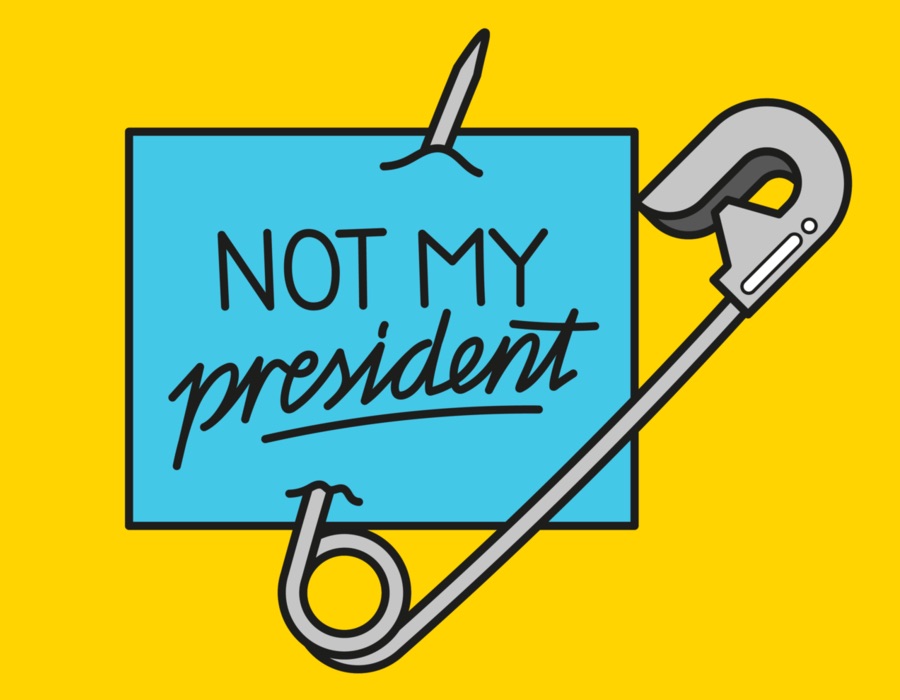 He is also not the president of the majority of Americans, about 60% of the American people disapprove or strongly disapprove of this president.  That number has remained relatively constant since he was elected.  He does not represent our views, our beliefs or our goals.  He is damaging our institutions, our treaties, dismantling our democracy, and dividing the country with his rhetoric.  He represents about 35% to 40% of the electorate and has never pivoted to try to represent the rest of us.  He is not our president.

People don’t just dislike him.  They despise him.  Every day on Twitter and Facebook and in op-eds across the country, Trump and his administration are written about or silently shouted about by angry Americans who do not accept his beliefs and those of his administration.  Sometimes I go down the “rabbithole” and read some of these comments on Twitter one after the other after the other on and on expressing hatred and revulsion for Trump and his toadies- a chain of tweeted comments, with gifs and chatter about how bad he is and how much he and his followers and his enablers are worthless pieces of —–.  It is good to know there are millions of us who reject this man.  But it also feels ineffective- like shouting in the wind.

Our allies share our negative view of Trump.  It was telling that Mike Pence went to Munich and at his opening speech to the room full of our European allies, he built up to his big applause line that he was bringing greetings from Donald Trump.  He delivered it and waited for the applause.  No one clapped.  No one.  You could have heard the wind blowing through that room in that deafening silence.

They despise him too.

Every day my husband and I watch the news and yell at our TV sets because we cannot yell directly at Trump or Steven Miller or any of the other corrupt, compromised people in his administration.  So, we yell at our TV sets.  That also feels like shouting into the wind.

It might feel good to complain or to express worry and fear with a supportive group about what is going to happen if Trump continues unabated for the next two years with his campaign to wreck our country and do Putin’s bidding.  It is important to know that we have this revulsion in common.  But it is not the answer to the problem we face.  We have to activate.

We have to vow to fight back by working in any way and every day to be the force that rescues our country from this diseased presidency.  The focus has to be on the future and the goal should be unitary government in 2020:  Dems ruling in the House and Senate and the White House.  That is the best way to undo the huge amount of damage that Trump and Trumpism has inflicted on our country.  That is the way to rebuke the Republican Party since it has lost its soul.  That is my goal and every single day I work towards it.

I have a career counseling practice and a busy life on top of that.  But the reason I write the Markin Report is to keep my spirits up and, hopefully, those who read the posts.  I set out to be a voice that can be trusted on Facebook, and I try to make sure everything I say is accurate.  I also try to be a voice that helps people activate to make the change we need to have happen in our country to reclaim our democracy.

In that spirit I hope you will join me in committing to getting unitary government in 2020.  That is the goal we need to keep in our hearts and in our actions and work towards every day!

Trump helps us every day.  He continues to be divisive and bizarre as well as shamelessly corrupt.  He will never pivot to try to represent all Americans.  He cannot at this point.  It’s too late.  He must cling to his base if he hopes to be re-elected.  But his terrible administration and his horrible polices ignite and power the opposition to him and will continue to do so.   We need to sweep him and as many Republicans as humanly possible OUT OF OFFICE.

How do we do that?

Take whatever time you are putting into reading and responding on Twitter and re-purpose it by activating to help Democrats win in 2020.  Here are some ideas.

NOT MY PRESIDENT’S DAY!

We have maybe a year to ramp up to the presidential election in November of 2020.  That is not a long time to get a lot done.   Jump in.  It’s up to us to save our country from Trump and Trumpism.  We cannot hope the Mueller report will save us.  Even if it comes out relatively soon, it doesn’t look likely Trump could be impeached and expelled because the Senate is under Trump’s thumb.

The answer, my friend, is NOT blowing in the wind.  We are the answer – you and me and everyone who is unhappy with this administration.  We still live in a democracy.  It’s called a participatory democracy for a reason.  We need to participate. Together we can reclaim our democracy!  Let’s do this!!