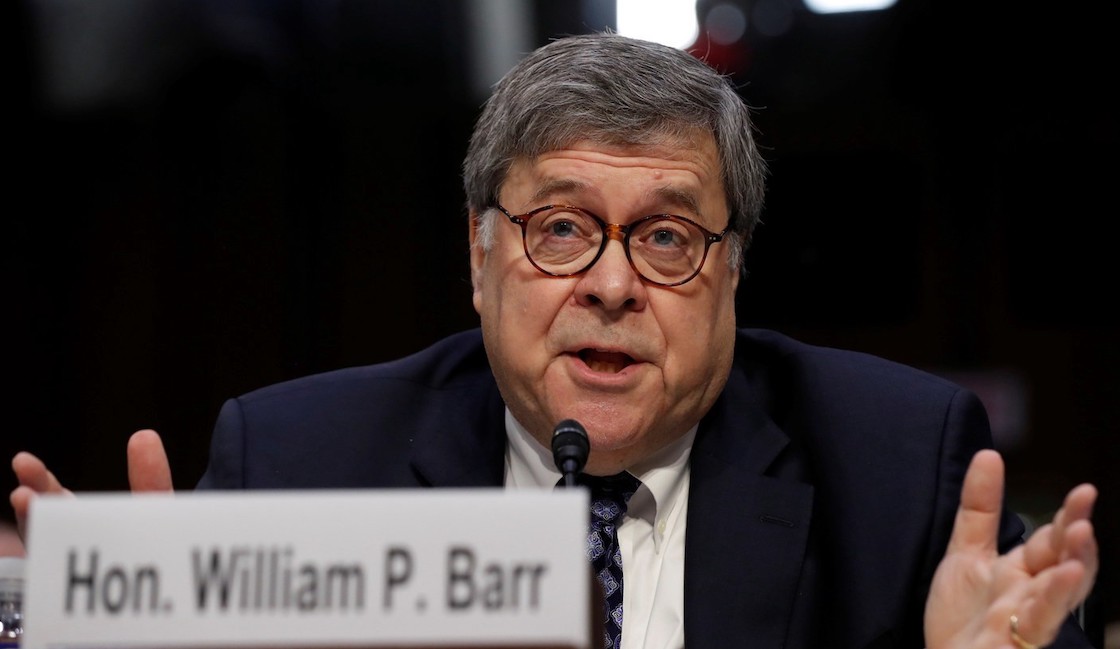 Attorney General Barr is turning himself into a pretzel trying to cover up for Trump by keeping evidence in the Mueller Report hidden from public view and from Congress while pretending everything is on the up and up here- nothing to see here.  Barr has written four letters now explaining himself and his actions and he has succeeded in getting more and more tangled up in the process of doing so.  Now he is claiming he cannot release the report because every page of the report is marked with a warning that it might contain grand jury material.  That sounds like a good excuse, but it is nonsense.

That is a commonplace warning that appears routinely on these documents the way pill bottles contain generic warnings about overdoses.  It does not mean there IS grand jury material on every page.  Our lawmakers handle highly classified information every day.  Redactions are the way to handle 6(e) grand jury material.  It is telling that AG Barr has not yet asked a judge to permit grand jury material to be released.  That would be a good first step.  Barr should have done that by now if he was interested in getting the Report to Congress and the American people.  Clearly he is not.

Some of the prosecutors who had been working with Mueller In DC have left that office now and returned to their prior jobs.  They are interacting with former colleagues and friends as they resume their prior jobs.  Many of them are being asked about their experiences and their reactions to what Barr is saying and doing.  And some of these former Mueller attorneys are talking.  The information from Mueller’s prosecutors is not coming directly from them.  It is being told to their friends and associates and from there it is whispered to the Washington Post, New York Times, NBC and other media.

These “leaks” are the result of Barr’s obvious attempts to sit on the Mueller Report and keep it out of the hands of Congress and the public. Information is oozing out and more will come unless Barr releases the Report without heavy unnecessary redactions.

What we are learning from the former Mueller team of attorneys is that Barr has been mischaracterizing the evidence and substituting his opinion for the information in the Report.  Former Mueller team attorneys are using words such as “alarming” and “significant” to describe the evidence of obstruction of justice.  They are saying that there was even more evidence of obstruction than the public knows about currently.  They describe certain Trump campaign members as skillfully manipulated by a sophisticated Russian intelligence operation and say the report has “compelling” evidence of collusion.  They are also saying that the intention was for the evidence to go to Congress for a determination about whether the acts are high crimes and misdemeanors in the eyes of our lawmakers. In other words, they did not intend for AG Barr to put his thumb on the scale to characterize the evidence as a total and complete win for Trump on collusion and to make a determination about Trump’s innocence when it comes to obstruction.

We have learned that the Mueller team prosecutors and agents put together summaries that were already carefully redacted that were supposed to be provided to the public and to Congress.  Barr is sitting on those summaries and claiming the Report must be redacted further by himself.  He says Mueller is helping him.  Mueller’s credibility is extremely high on both sides of the political divide because Mueller has not engaged in politics or “spoken out.”  Barr is probably claiming Mueller is helping him as a way to improve his own, now shaky, credibility.  It seems likely to those of us who are skeptical of Barr’s motives that Barr is using this excursion into the realm of unrequested editing to whitewash or scrub embarrassing information that Trump would not want known about himself and his family from the final Report he will release.  Barr hinted at this when he said in one of his letters that he would take it upon himself to remove information that would damage “reputational interests of peripheral third parties”.  That is not a legal term of art.  That is HIS criteria for redaction.  He also did not define who would be in the category of a “third party”.  Trump might be in that category.

In addition, Barr’s refusal to release the Report has given Trump ample time to do his branding and create a narrative that was supposed to help him politically.  That is backfiring now.  Trump’s triumphant declaration that he is fully exonerated was an overreach.  It did not move any poll numbers in his favor because the American people will not change their beliefs about Trump until and unless the Mueller Report is released in its entirety and it has surprising factual information that will move the needle.  And even then, we all saw what we all saw and heard what we all heard.  Trump cannot scrub our memories the way those agents did in Men in Black with their handy memory erasers.

The reason that Barr is stonewalling and putting out lame excuses to keep the Mueller Report from getting out into the public space is getting ever clearer with each passing day. This is the result of his tacit agreement with Trump to act as his lawyer-fixer.  The Attorney General is supposed to be the lawyer representing the American people.  But everyone in Trump’s orbit must be “loyal” to him or expect to be fired.

If you have ever tried to stop water from flowing from a broken spigot, you know that you can try to hold it back with your hands, and it might even stay back for a while, but soon you get water leaking through and eventually the water spills out.  We are in the leaking through phase right now.

Mueller’s team will not be able to stay silent while Bill Barr mischaracterizes the evidence and facts they uncovered after two intense years of their lives working this investigation.   We will get our Deep Throat.  Unless Barr releases the report to the House Judiciary Committee on his own.

Jerry Nadler is the Committee Chairman and he is giving Barr the chance to do the right thing by putting him on notice and waiting for a few days.  Subpoenas are ready and have been approved but have not been deployed yet.  Nadler is using them as a reminder to Barr that he ought to think carefully about his legacy and his own reputational interests.  After Trump is out of office, Barr will still be practicing law.  But if he is complicit with Trump’s cover up, he may not have the best professional opportunities once this nightmare administration is over.  He might have a lot to live down.  If Barr’s three page statement was seriously misleading, Barr himself could face charges that he was part of an obstruction of justice.  Remember what happened with Nixon’s AG in Watergate?  John Mitchell went to prison for obstruction of justice and other crimes he engaged in to protect Nixon.

The information in the Mueller Report is going to come out.  Many roads lead to Rome.  Mueller could be subpoenaed to testify before one or more of the House committees.  Some of the summaries might show up in the mail box of the New York Times or Washington Post.  The public interest is too great and the unfairness of a complicit AG trying to sanitize the work of some of the best career prosecutors and FBI agents around who have important information for us about how the Russians attacked this country and succeeded, will result in the truth coming out.

Our Deep Throat is coming.