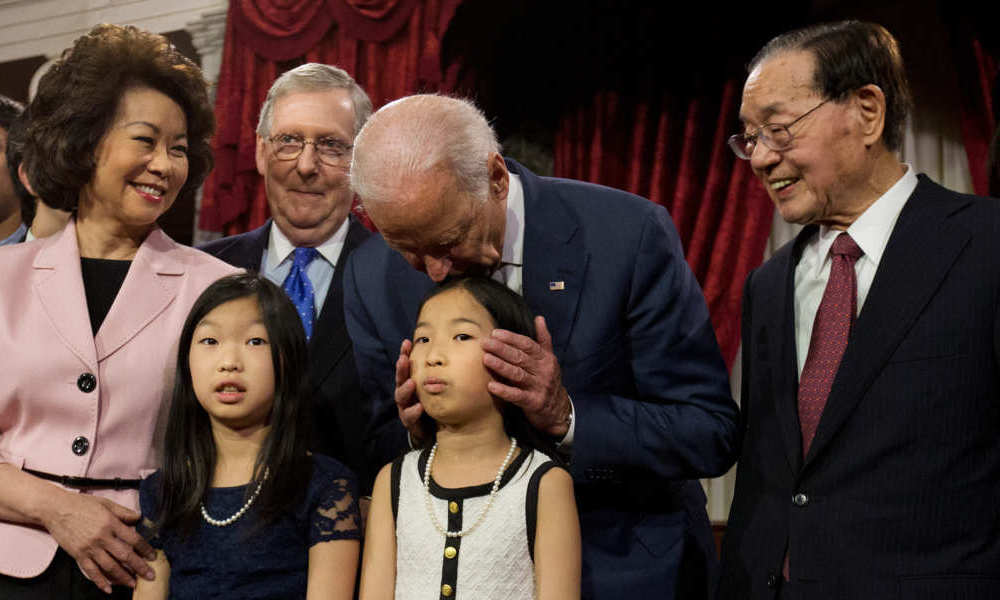 It is no secret that Joe Biden is a handsy kind of guy.  He might lean in and get too close, touch your neck or shoulder when a formal picture is taken and he is standing closer than most people do.  Having met Joe Biden at a meet and greet at his house when he was the Vice-President, and having a daughter who was with me and who experienced his handsyness when we met him, I thought I might weigh in on this subject.  I am also a former states attorney who prosecuted rape and sexual assault cases.  And I am one of those feisty grassroots progressive women living in a Republican leaning suburb who got active after Trump was elected and cannot wait for him to leave the White House.  I guess that qualifies me to speak out since everyone else is.

Biden has been through a lot of emotional pain in his life.  He lost his first wife and daughter in a car accident.  More recently he lost his son to brain cancer.  He comes from a family where people are comfortable hugging and touching each other.  Families are very different that way. Biden may be into being hands on with people partly as a way to heal himself.  He is also the product of an era that permitted men in power to do what they wanted without consequences.  We still have a man in power in the White House today who has done things that are far more violative than handsy Joe Biden. The difference is that Trump’s voters do not seem to care about that.  Biden’s potential voters do.

My personal experience of Joe Biden was that with me he seemed authentically warm, caring and empathetic.  In his interactions with me he expressed a heartfelt connection.  But he also interacted with my daughter who was in her twenties at the time.  As the photo was being taken of myself, my daughter, and the Bidens, Joe Biden placed his hand on my daughter’s rear end.  She was shocked.  It was not something she felt she could speak out about in front of everyone.  Jill Biden was there.  There were people all around waiting to get a photo with the Vice-President.  My daughter told me what had happened immediately after the photo was taken and we had moved into the dining room.  This was before the #MeToo era.  I made light of it, but it was troubling and uncomfortable.

I have also had my picture taken with Michelle Obama and she hugged me around the waist.  She didn’t ask my permission.  But I loved that warm embrace from her.  I felt like I was her new best friend.  That was wonderful!

Of course there was a big difference with Joe Biden’s intrusion into personal space.  Even if he only leans in closer than other people do and touches people before they give permission, it can feel unnerving because of the cultural norms we have surrounding touch and an invasion of personal space especially when it comes to men interacting with women and girls.  When he went beyond the norms and strategically put his hand on my daughter’s rear end, that was not okay even before the #MeToo era.

Many men behaved this way before women spoke out about these and other more upsetting violations.  Some men in power felt they were entitled to “cop a feel” here and there.  They were “being naughty”.  I have had my share of experiences with men who violated my personal physical space and knew better.  Many women have had those experiences.  The difference was that no one talked about it back then.  Thank goodness we can talk about it now.  We can also change this cultural norm because we can talk about it.

Without a doubt, going forward, Joe Biden knows that he must ask for permission.  However, I hope Joe Biden doesn’t stop being a man who expresses his heart and gets close to people.  I expect that Biden’s handsyness will be used as a cudgel against him and evidence that he is not the right guy for this new era.  That may or may not be true.  As the primary season goes on, we will learn more about who inspires Democrats in 2019.  Barack Obama has warned that if Democrats have a purity test for their nominee no one will pass muster.  The truth is that everyone is flawed.  No one is perfect.  But some are more flawed than others.

I do not know whether Joe Biden is the right person for the presidency.  But Joe Biden is someone who could have an inside track when it comes to beating Trump.   The reason is that he could more easily win back those crucial blue collar voters in key Midwest swing states that went for Obama and then took a chance on Trump in 2016 – the all important “Trump-triers”.  These voters trust Joe Biden.  Biden’s blue collar handsyness and warmth could be a huge plus when it comes to winning back the Midwest that Trump is so desperate to keep.  Because of the Electoral College, these voters seem to be the key to a Democratic victory in 2020 whether we like it or not. (See the New York Times front page article “Liberals on Twitter Don’t Speak for Quiet Majority”.)

And one more thing.  Even though I do not know whether or not Joe Biden is the right person for the presidency,  I do know that more than ever before, we need to heal as a country.  We need to reach out and care about each other emotionally more than we ever have before.  When we lay our hands on other people it has to be with the right motive.  It has to be with permission.  And it has to be in the right places.  Hugs are good and touch can be healing when it is welcome.  We could all use some more heartfelt welcomed hugs in this world.