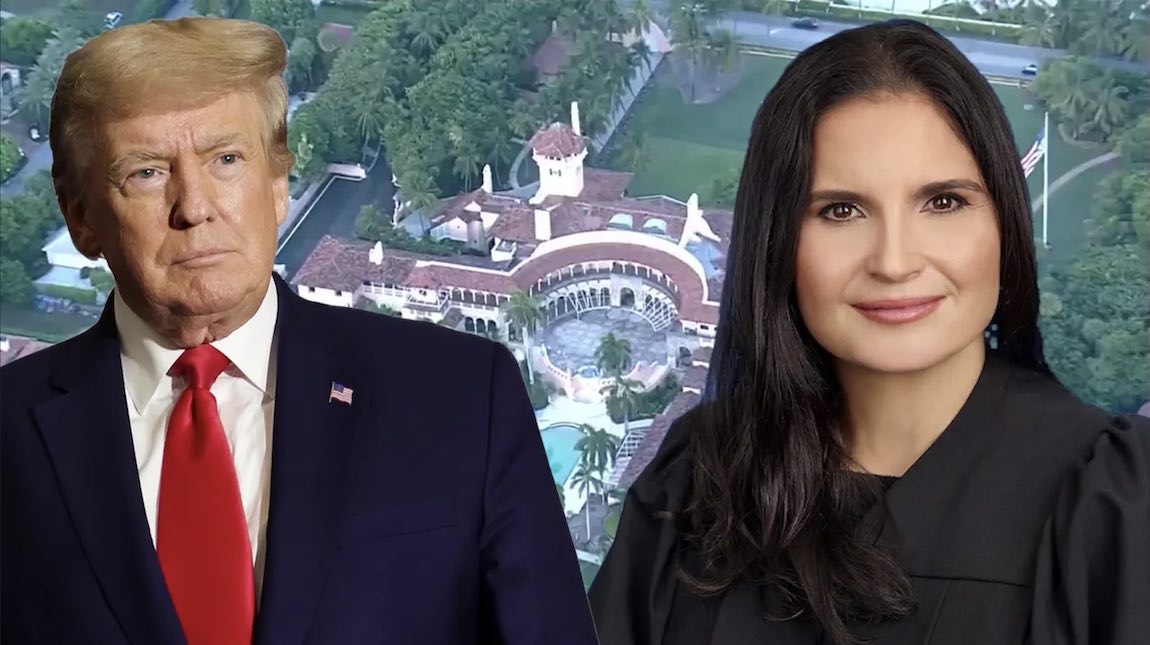 US District Judge Aileen Cannon decided to appoint a special master [in Trump’s Mar-a-Lago case] to filter out not just attorney-client records, but anything which might be covered by executive privilege, as well as the former president’s personal property. And for good measure, she ordered the Justice Department to stop using the information it already reviewed in its ongoing criminal investigation.

How can a judge in a civil suit enjoin the federal government from conducting a criminal probe, particularly when there’s been exactly zero finding that prosecutors did anything other than strictly by the books?

But Team Trump’s failure to make a coherent legal argument was no deterrent to Judge Cannon, who filled in all the blanks for them, and even spared them the trouble of going through the hassle of filing a Rule 41 motion for the return of personal property, under the guise of ensuring “at least the appearance of fairness and integrity under the extraordinary circumstances presented.”

“Settled law permits him, as the owner of the premises searched, to object to the seizure as unreasonable,” she tut-tuts, invoking a Fourth Amendment claim never asserted (by the Trump lawyers) and ignoring the fact that such an objection should properly have been lodged with US Magistrate Judge Bruce Reinhart, who approved the original warrant.

The first bit of Trump’s homework that Judge Cannon completes for him is to go through the four-part analysis from Richey v. Smith, 515 F.2d 1239, to justify her own equitable jurisdiction. While conceding that “at least based on the record to date, there has not been a compelling showing of callous disregard for Plaintiff’s constitutional rights,” the court invents “an individual interest in and need for the seized property” and “irreparable injury” from deprivation thereof that was never argued in Trump’s motions and is certainly not established by the evidence on the record. [Above the Law]

It is rare for Republicans and Democrats to agree on anything but this decision by Cannon has brought lawyers of both political persuasions together in a chorus of condemnation for her shoddy legal reasoning and her clear bias for Team Trump. Even former AG Bill Barr has been on Fox News decrying her decision and saying DOJ needs to appeal it.

Who is Judge Cannon?

Judge Cannon was born in Columbia, South America in 1981, and moved to the United States with her family as a child. She is bright- she went to Duke for her undergraduate degree and Michigan for her JD. She had a clerkship, then worked at a well respected law firm, and then served as an Assistant US Attorney in Florida. She got her appointment to the federal bench at the last minute thanks to the Federalist Society and Trump. In the final crazy days of his presidency AFTER he lost the 2020 election, Trump rushed to elevate a bunch of conservative lawyers to federal judgeships before he no longer had the power to get them on the federal bench. Cannon, who is 41 years old now, just barely had the 12 years recommended for appointment to the federal bench. But that youthfulness is what the Republicans have been using as a litmus test for appointments. Those young Federalist Society lawyers will be judges for decades and will influence our country long after Trump is dead and gone.

Judge Cannon got this case supposedly randomly but I cannot help being suspicious about the assignment.

Cannon is the least senior federal judge for the Southern District of Florida, where five of the 16 active judges were appointed by Trump. According to court rules, cases like the special master request are “assigned on a blind rotation basis … to a judge assigned to hear cases in the division to which the case has been assigned.”

What Judge Cannon Did and Didn’t Do

After the original magistrate judge approved the search warrant that gave the FBI permission to search certain areas within Mar-a-Lago, challenges to his decision should have gone back in front of that same judge. Instead, it sure looks like the Trump lawyers went forum shopping. They looked for a venue that might be better for them and chose one, outside of the West Palm Beach area, that had 5 Trump appointees. They must have broken out the champagne when they landed Judge Cannon or found a way to get her assigned. (There’s no proof of shenanigans but I am skeptical about this “random” appointment.)

A less biased judge would probably have told the Trump legal team to go back to the magistrate judge to get a ruling on their request for a special master to be appointed. But she did not do that. That first failing seemed prejudiced in favor of Trump from the start. After that Judge Cannon commented that she was inclined to appoint a special master before she even heard anything from the Justice Department attorneys. That indicated bias as well. And then she ruled in favor of the request for a special master and she gave Trump everything he wanted and then some.

The DOJ Appeals Part of This Ruling

DOJ has filed an appeal asking for a stay of a part of the ruling by Judge Cannon. What this means is that the DOJ is asking the judge to reconsider part of her ruling. Specifically DOJ is asking her to remove the 100 most top secret documents from her ruling that enjoins/stops them from continuing their criminal investigation. The DOJ is saying go ahead and include all the other documents in the review by a special master but exclude the super top secret ones from the review and the prohibition so that we can continue to figure out the damage that has been done with respect to those documents and we can still build our case (against Donald Trump).

That is essentially an off ramp for Judge Cannon.  It would be a good idea for Judge Cannon to go with the suggestion DOJ offers. It would help her avoid the embarrassment of being overturned by the appeals court and allow the FBI to keep working the case without a hiatus that could seriously imperil our country. If she does not take this opportunity to revise her decision, we will have even more conclusive proof that she is not the neutral arbiter of justice a judge should strive to be, but another Trump sycophant. It would also be more evidence that the Federalist Society has successfully damaged our judicial system by injecting it with political players instead of fair and impartial judges. DOJ gave Judge Cannon an off ramp. The question is whether she will take it.