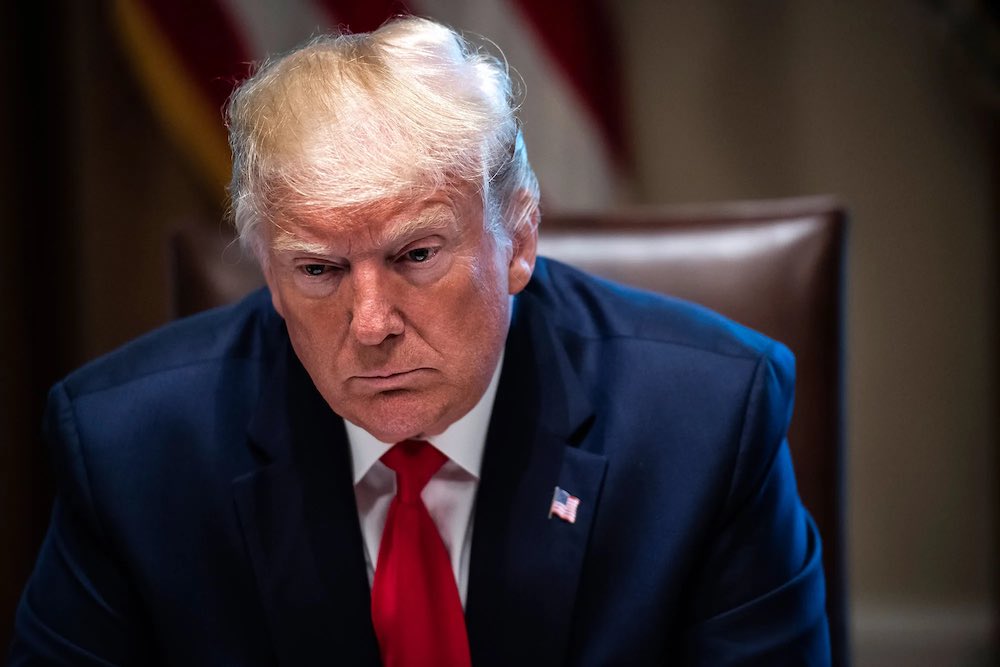 Yeah, I know what you’re thinking: “Why is this time different from any other time Trump broke the law and didn’t pay the price? Teflon Don has gotten off every time he has broken the law. Why won’t he skate again?”

It’s true that Donald Trump has evaded any consequences for breaking the law in his life and as president. But this time IS different. He’s not the president anymore and without that power many people who have been protecting him are not able or interested in covering for him now. As a FORMER president Trump has lost his power to make deals and get the protection he used to get during the presidency that allowed him to maintain his image and stay in power. There was that OLC opinion that Robert Mueller enshrined that a sitting president could not be indicted. Remember that? He got major protection from that as well as a Republican Party that was eager to use Trump to get what they wanted- Federalist judges on the court, Supreme Court justices that would destroy Roe and uphold everything corporations dreamed of, and don’t forget that tax cut for the rich.

But Trump is not president anymore. And that means his protection racket has been deeply impaired. Instead, people who protected him, like Bill Barr, have seen the handwriting on the wall and decided to rejoin Team Normal. They are writing books to make money off of their time in office, trying to downplay their role helping Trump upend norms and laws that hold our democracy together. Geoffrey Berman, who was the US Attorney for SDNY, has a book out in which he recounts the ways Trump and Bill Barr tried to get him to politicize his office and how he resisted until he quit. You are left wondering why he didn’t report all this underhanded activity Barr engaged in to the Inspector General. In an MSNBC interview on Deadline White House Berman responded to that question by saying his office was able to handle the pressure. Maybe so. But just think how things might have been different if everyone who was subjected to Trump’s pressure campaigns to break the law, rules and norms had joined with others under pressure, exposed Trump, and outted him in public. We did not have many profiles in courage during Trump’s time in office. Trump maintained immense power as a result.

But Trump is the FORMER POTUS these days. And that is a difference with huge impact. He did not get invited to the funeral for Queen Elizabeth. In the world at large, Trump is a pariah. As his power dwindles the likelihood of indictment rises. Trump must be thinking he will be indicted because he is threatening to unleash his loyal militant cult members on America if he is indicted, echoed by Lindsay Graham’s threat of blood in the streets. Trump says Americans won’t stand for it. For Trump the only real Americans are his cult members because the rest of America would be relieved to learn that Trump is not above the law after.

40 subpoenas were just issued by the Department of Justice in their wide ranging investigation of the coup plot to overturn the 2020 election. People closest to Trump who were part of Team COUP are getting accosted by FBI agents when they least expect it like Mr. Pillow Guy at a Hardees restaurant. They are getting their cell phones taken away.  John Eastman, the fake elector scheme mastermind, is another who was relieved of his cell phone. But they aren’t the only ones. DOJ is clearly hot on the trail of anyone who engaged in the fake elector scheme, the January 6th insurrection and the related incidents that shed light on Trump’s engagement, intent and motive. Mark Meadows just complied with a DOJ subpoena. DOJ has issued subpoenas to two state senators in Arizona that show that the Justice Department is working to find out what was going on in that state with the fake elector scheme. And they want to know about Tina Peters the Mesa County Clerk who oversees elections there and gave unauthorized access to people who compromised the voting machines. She faces 7 felony counts in her state for that election security breach.  And Hallelujah! The January 6th Committee was able to locate and recover a lot of text messages after all from Secret Service agents and others involved in activities on January 5th and 6th that should help to expose Trump’s level of engagement in the coup. This ain’t small potatoes. It’s big potatoes. Trump should not be sleeping well at night. It won’t matter if the GOP retakes the House in 2022. The DOJ will still pursue this evidence. Those who doubted Merrick Garland are apologizing now. Oh ye of little faith.

Trump has gotten away with a whole lot of cons. Trump University is just one glaring example. He had to pay $25 million to get three civil cases dealt with as he became president. But Trump now faces a classic wire fraud case which is a criminal matter. He urgently told donors that they should give him money to appeal the election outcome which he claimed was rigged and stolen. It wasn’t. There was never anything to appeal. But just like Steve Bannon who is going to jail for his con on Trump supporters to give money to Build the Wall which instead lined his own pockets with 1 million dollars, Trump committed a classic wire fraud by getting money for his Save America Super PAC based on lies and using emails to get supporters to part with their money. The “election was stolen” claim is a provable lie at this point. That was the lie he used when he solicited donors in a flood of emails claiming that he would apply the money to appeal the election results. The great thing about wire fraud cases like this is how easy they are to prove up. They rely on paper, not on witness testimony. Witnesses can be unreliable. Paper doesn’t lie or have memory problems on cross examination. This case is important because it will help to defeat the lie that the election was stolen which Trump is still using to make money and rile up his cult base.

Next we have the Mar-a-Lago case in which Trump attorneys are trying to portray hoarding top secret documents as a “storage problem”. He has no evident defense to violations of law that imperil our country’s national security. He HAS, however, found a servile protector in Judge Cannon, who seems to be willing to make a mockery of herself and her legal acumen in service to Trump who put her on the bench in a Hail Mary pass after he lost the election. It is hard to believe that when this case goes up to the 11th Circuit on appeal, which seems to be where it is headed, that even THAT Trump infested appellate court will fail to understand the need to protect national security over whatever lingering servitude they might have when it comes to Trump. One of the few good things about most Federalist judges is that they usually believe in the Constitution and in law enforcement.

Then there is the Georgia case with Fani Willis moving aggressively to get to the indictment phase of the case involving fake electors, Lindsay Graham and Donald Trump breaking the law by trying to get the Secretary of State, Brad Raffensburger, to “find” just the right number of votes to get Trump over the hump in Georgia so he could say he won that state. It is not likely that she will indict before the November election although she is not subject to the same 60 day “quiet period” before an election that DOJ is. But look for indictments to come after the election. We can tell how far along she is in this investigation because in Georgia, unlike a federal grand jury, when there is a subpoena issued outside of Georgia Willis has to get a court order which brings it to the attention of the public.

Donald Trump has become an albatross for the Republican Party that is separate from the MAGA wing of the GOP. People like Mitch McConnell and others who are not enslaved to Trump wish he would go away. His base still loves him but there aren’t enough of those cult members to get him elected in a general election.  Now that the primaries are over, watch as his chosen candidates like Dr Oz, Hershel Walker, JD Vance and Blake Masters try to distance themselves from him before the general election. They have only a few weeks left to pretend they never really wanted an abortion ban and they never really loved Trump that much.

In short, Trump and Trumpism was golden in the primary with his rabid base but toxic in the general election. Independent voters, women, young voters and Democrats are terrified about a possible return of Trump. To the extent that the midterms are about Trump, a majority of general election voters will rise up and support Democrats out of fear and loathing about him and outrage about the Supreme Court’s decision in Dobbs that destroyed a 50 year Constitutional right from American women. Trump may not know it yet but he is kinda like Sean Penn in the movie Dead Man Walking, except without the remorse or the insight.