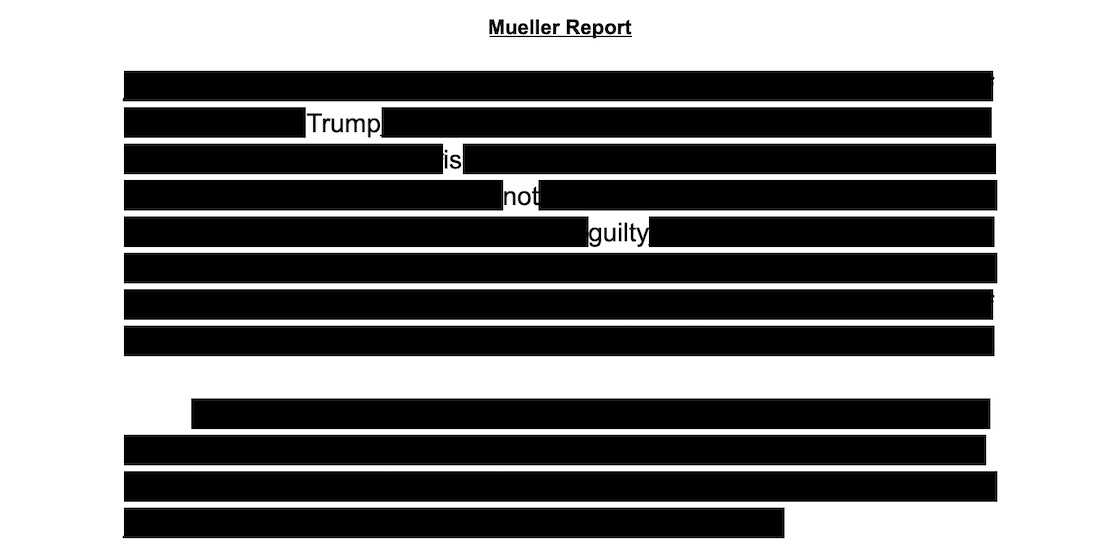 The Report is finally here but this day in infamy began with AG Bill Barr standing up before the world and acting as Trump’s publicist/fixer claiming, falsely, that the Report says there is no collusion (four times) and that he, Barr, is the decider when it comes to obstruction.  Also wrong.  Barr’s statements were riddled with just plain lies about the Report.  Shame on him.  He is supposed to be OUR attorney general.  He is not.  He is Trump’s Roy Cohn.  May he never live it down that he sold out our country.

The Mueller Report comes in two chapters.  The first is about the Russian troll farm and cyber attack and information linking the Trump Campaign to Russians.  The second chapter is about obstruction of justice.  Chapter two is a lot longer than the first chapter because it is chock full of evidence (ten specific episodes) about what people did and said to protect Trump, warn Trump, and also struggle with their own personal better angels about whether to carry out Trump’s illegal demands of them as Trump tried his damn best to obstruct justice.

First things first.  Barr lied to us.  Here is what he lied about.

What was Mueller trying to do with his Report?  He was clearly trying to put together a Road Map to help Congress do its job since he, Mueller, was prevented from indicting a sitting president (or so he believed). On Page 2 of Chapter 2 Mueller says he cannot charge a sitting president.  But when he looks at all the evidence that he has assembled he cannot say Trump is not guilty of obstruction.

This is important information.  What Mueller is doing here is throwing a pass to Congress to take the ball and run with it since he cannot.  He is saying it particularly carefully because if you are not charging someone with a crime, you are also not supposed to impugn them.  (Remember how Comey got in trouble for what he did with Hillary?  Mueller is trying to avoid that.) Mueller was bending over backwards to be fair to Trump because, he reasons, a normal person charged with a crime can get a speedy trial but a president has trouble clearing his name and the disruption to government is also very great.

Trump himself understood the peril he faced once Robert Mueller was appointed as Special Counsel.  In a very telling account in the Report, when Sessions tells Trump that Mueller has been appointed, Trump says, “Oh my god this is terrible.  This is the end of my presidency.  I’m fucked.” Trump’s reaction tells us his state of mind.  He knew all the bad stuff he had done and eventually it would be found out if he was investigated.  At one point in a reported conversation, we learn that Trump knew in advance that Wikileaks was about to dump more dirt, for example.  Trump knew what the Russians were doing to help him out and he was all for it.

After the appointment of Mueller, Trump immediately blames Sessions for allowing this to happen.  After that he engages in attempt after attempt to end the investigation, stop it, stonewall it, and get everyone around him to protect him and tweets out his rage with Sessions and then Mueller and the FBI etc etc.  This is textbook obstruction of justice. Full stop.  Game. Set. Match.

In short, the take away from the Mueller Report is that Mueller was constrained and hemmed in and limited in his investigation.  By refusing to be interviewed and by getting everyone he could to lie for him, Trump gamed the system and has seemingly won this early round.  But this is not over.  Not by a long shot.

Because Mueller could foresee that he would be limited by Rosenstein, by the DOJ rule, and now by Barr, he spun off at least 14 continuing investigations to other offices including the SDNY as well as others.  In addition, Mueller’s Report will now go to the Dems in the House. They are going to find a way to get the full report.  The easiest way might be to subpoena Mueller to testify in person in an open, public hearing to talk about what he is saying in his Report and bring his Report with him.  Even if he sticks to only what is in this report, it is quite damning.

At one point in the Report Mueller says that if the FBI did a further investigation it would find crimes that Trump and his campaign engaged in.  Well that’s interesting!  It tells us that Mueller saw more bugs crawling under the rock that is Trump and his gang of enablers, but he was constrained from investigating further by his limited mission.

Our country is now at the moment of truth.  Literally.  Do we care about the truth?  Are we going to let Trump get away with defying the law?  If he does get away with this, what will he be emboldened to do next? Mueller says in this Report no one in this country is so high that he is above the law.  But it will be up to the House Dems to prove Mueller right.

We the People need to be ready to support our lawmakers who, I hope, are going to try to do something that not even Mueller could do- namely, tell Donald Trump he is not above the law.  He needs to be impeached.  And Bill Barr should be impeached too.  And the start of all that is to have open hearings so that the public can understand how bad Trump really is for our country.