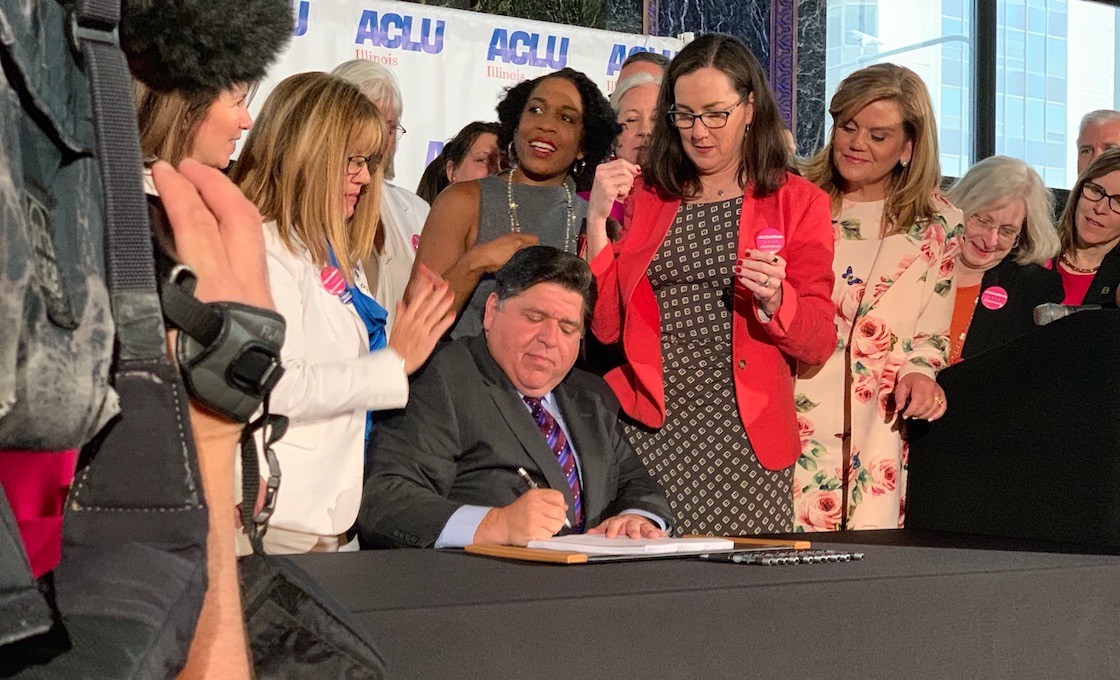 On Wednesday, June 12, 2019, J.B. Pritzker, the newly elected Democratic governor of Illinois, signed the Reproductive Health Act into law.  This was after a hard fought battle in the state legislature where abortion rights groups, lawmakers and PACs all pulled together to get this bill signed into law against the backdrop of rabid right wing anti-choice groups that are forcing state after state to pass legislation that violates Roe v Wade and a woman’s right to choose what to do with her own body.

Across this country reproductive rights for women and girls are at risk.  Some states have passed “fetal heartbeat bills” that criminalize abortion at 6 -8 weeks, which is almost invariably before the time a woman knows she is pregnant.  Alabama just passed a draconian bill criminalizing abortion for any woman unless her life is at risk, no exception for rape or incest.  Doctors performing abortions could go to jail for life if some of these bills are upheld. Some states want to not only criminalize abortion but make crossing state lines to get an abortion a murder.  “Fetal personhood” bills are being passed that bestow rights to unborn fetuses including property rights and the right to bring a lawsuit against the mother which is patently absurd.  We are seeing laws that could result in a pregnant woman being arrested for taking valium because it could harm the fetus or arrested if she is depressed enough that she might consider suicide. Many right wing groups are trying to outlaw birth control as well.

We are now in a pitched battle over the fundamental rights of women to decide what to do with their own bodies.  This battle has been brewing for years but the moment of truth is now.  “It is not a question of if Roe v Wade will fall, but when,” according to Terry Cosgrove, president of Personal PAC of Illinois, a very effective lobbying group and PAC that supports pro-choice legislators.  Illinois has been a leader in reproductive rights in the Midwest largely because of the efforts of Personal PAC, ACLU-Illinois, Planned Parenthood- Illinois, Men4Choice, and other groups and legislative leaders who have been pushing back against a right-wing assault against abortion and birth control for many years.

Right-wing ideologues who helped get Trump elected with the explicit goal of overturning or crippling Roe v Wade come hell or high water believe they can succeed now.  Emboldened by the appointment of Gorsuch and Kavanaugh to the Supreme Court, and over 100 right-wing judges on the federal bench, the religious right anti-choice forces think the time has come to eliminate women’s rights to make decisions about their bodies, the right to an abortion if you need and want it, and the right to access birth control.  Roe vs Wade is hanging by a thread.

This is crazy!  A majority of Americans favor abortion rights for women.  Seventy-seven percent of Americans support a woman’s right to choose and believe that decisions about pregnancy should be personal, private decisions between a woman and her doctor.

Even while some states are rushing to pass bills to criminalize abortion, other states, like Illinois, are hurrying to pass legislation to protect a woman’s right to choose if Roe is overturned.  Kansas has determined that its state constitution, which grants the fundamental right of liberty to all persons living in the state, must be read to include the fundamental right of women to decide what to do with their own bodies without interference from government.  Nevada passed the Trust Nevada Women Act, recognizing a woman’s right to make decisions about her own body.

Some companies are getting involved in pushing back against the radical right-wing.  When Georgia passed their recent anti-choice bill, it drew criticism from blue state California’s film industry, which is threatening economic reprisals by NOT filming movies in Georgia anymore unless the law is changed to protect women’s reproductive rights.  Other companies are being asked by NARAL and other groups to step up to protect women’s rights.

Even in states with Democratically led legislatures, like Illinois, that have been able to shore up and build in laws to protect abortion and privacy rights, state legislatures are facing an extraordinary assault from vocal right-wing anti-choice forces. Pro-choice legislators and groups in Illinois were successful because they worked in concert to get passage of the RHA.  But even in Illinois the bill was held up in committee and almost did not get a vote this session.  Because of the large number of anti-choice laws being passed in other states, the overwhelming number of calls and emails from constituents, and a group of about 100 women who dressed as handmaids and stood in silent protest while the legislators debated the bill in Springfield, Illinois, legislators decided they had to take this vote on the RHA despite the fact that a yes vote would bring the wrath of the right wing down on them.

The good news is that these efforts in Illinois paid off.

The RHA made three key changes to the laws in Illinois. 1) It wiped away certain laws that could have limited a woman’s freedom if Roe was ever overturned or crippled.  It did away with potential spousal consent and mandatory waiting periods before getting an abortion as well as repealing laws that required medical personnel to misinform women. 2) It established a fundamental right of women to have “bodily autonomy” and make decisions about her own body without interference from the government.  3) The law requires private insurance to cover the expenses of abortion just as insurance covers any other medical procedure.

This fight is far from over. Terry Cosgrove has been the president of Personal PAC, a lobbyist for 30 years, and he knows what he is talking about when he says. “They (the right-wing) will never be satisfied until they’ve taken away abortion and birth control from all women.”  Personal PAC has been a dominant force in Illinois and other states should use that PAC as a model for fighting back against the rabid right.

“Given the emergency we are in,” Cosgrove says, “many other states could form PACs like Personal PAC in Illinois much more quickly.”  There is a more compelling argument to be made now that the “mask is gone” and we can see that the rabid right is not about helping women have good health care but about forcing especially poor women to bear children if they get pregnant without exception even for rape or incest.  “State by state we have to protect reproductive rights and we now have a roadmap.”

There is an immediate need for everyone who cares about this issue to get off the bench and get involved.  You can participate.  The forms of protest include rallies in front of state legislatures, (some people dressing up as handmaids as in the Atwood novel and participating in silent protest which is very effective!), phone calls, emails, and monetary support for groups that are in the front lines of this fight: Contact Planned Parenthood, the ACLU, NARAL, and look up #stopthebans to be connected with activities near you.

We are the majority, but we must speak up.  If having your rights taken away from you makes you angry or upset, get active!  Help to turn the tide against anti-choice forces that do not represent the views of most Americans.