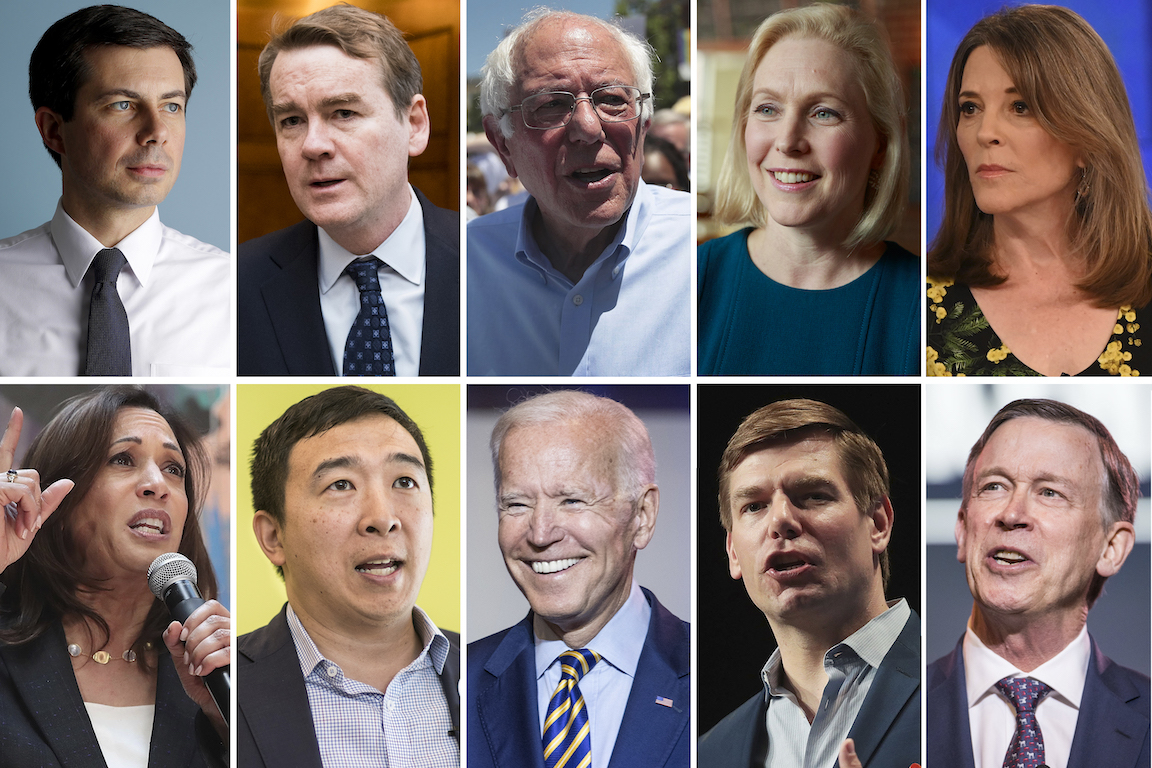 The first Democratic debates are over and we do not know who will need to drop out or who will be able to stay in the race.  But any one of them would be better than Trump.

Trump, as president, is sitting in the catbird seat.  He has turned our democracy into a corrupt shadow of its former self.  America is for sale with Trump as president.  That means a lot of rich, corrupt people are on Trump’s bandwagon.  They are filling Trump’s re-election coffers.  Although Trump is running for re-election now, he never really got off the campaign trail.

The guy has been running for president ever since he came down the escalator at Trump Tower 4 years ago in 2015.  The image of Trump coming DOWN an escalator was prescient.  Ever since Trump got into politics America has been on a downhill slide when it comes to our political discourse, our unity, our relationships with allies around the world, and our progressive values.

Trump’s Orlando relaunch of his endless endless campaign for president was full of his now boring hits from the golden oldies.  He railed about Hillary Clinton.  (Hey, man, she’s not on the ticket.) He talked about how great he is.  (Duh) He went on and on about the Mueller Report and how he was the victim of a witch hunt and that’s why his approval numbers can’t rise above 40%. (Yeah. Sure.)  People began leaving early.  They had seen this show before.  Time to change the channel.

The man has accomplished next to nothing: a tax bill that made the 1% richer, the border situation is not better, but worse,  his administration is the most corrupt in recent history, our health care and infrastructure are a mess, climate change is not being addressed and de-regulation of polluters by the EPA is making it worse and American businesses and farmers are reeling from his trade wars and poor judgement, women’s rights and the rights of minorities are being assaulted.  Oh, and we may be on the verge of war with Iran.  Above all Trump is destroying our democracy and decimating relationships with our closest allies while he plays footsie with brutal dictators.  He just did a photo op with Kim Jung Un as he stepped across the demilitarized zone, shook hands with this monster and met with his bestie for an hour, giving Kim lots of propaganda photos to showcase but giving us…nothing.

And yet, despite all of that, Trump could still win again in 2020!

Trump could lose the popular vote by 5 million and still win re-election because of the way votes are counted in the presidential race.  When it comes to the presidency this is NOT a one person one vote country.

The weight attached to each vote clearly tends to decrease as voter turnout within a state increases.

The Electoral College does add extra weight to votes cast in the least populated states.

Our system does not reward high turnout.  Instead, it reduces the value of each person’s vote as turnout increases in the state.  This weirdness was part of the complex and improbable way Trump eaked out his win in 2016 with some 77,000 votes in the combined states of Michigan, Wisconsin and Pennsylvania. In other words it takes more votes to win in certain high density areas of the country.  Turn out becomes absolutely crucial.

That pathway to victory could still be there for Trump unless we create a strong ground game especially in key swing states.

We already know which states are securely red or blue.  We also already know that the only states that will make all the difference in the outcome of the presidential election in 2020 will be these seven swing states: Wisconsin, Michigan, Pennsylvania, Georgia, Florida, North Carolina, and Arizona.  And the margins will be razor thin.

We need to act strategically to win in 2020.  And we need to start the effort to beat Trump RIGHT NOW to build in the ground support in states where candidates are not spending a lot of time because they are focused on the primary states which are not these key swing states.

Organizing Corps 2020 is one of the best ways to beat Trump.  This group is led by many former Obama organizers.  They are recruiting, training and will be deploying 1,000 political organizers to these seven key states where they will scale up the ground game with local volunteers to get out the vote by talking with voters early and building trust.  Door to door is most impactful.  Targeted analytics will be used to identify potential voters.  The goal will be listening, relating, understanding the needs of the voter, helping the voter understand the way the Dems can help with kitchen table issues they are facing, engaging and activating the voter to go to the polls.

This ground game was sorely missing in Clinton’s 2016 campaign in many of these key states. If OC 2020 gets enough funding, the connection with voters in the seven crucial swing states will be ready for whoever becomes the Dem’s nominee for president in June of 2020 at the Convention.

OC 2020 is partnering with the DNC and getting some funds from that group but is a stand alone organization.

Training has already begun but there will be more vetting and training to come.

If you are worried about Trump winning again.

If you care about women’s rights, health care, and infrastructure.

If you are concerned about the future of our democracy.

If you are upset about climate change.

If you are bothered by Trump’s divisive rhetoric and corruption and his inhumane treatment of children at the border.

If you want to be part of the blue Tsunami that takes Trump down.

Then support Organizing Corps 2020!  Fight back against Trump and Trumpism.  Give directly to OC 2020 through Invest to Elect Chicago.  We are having a fund raiser in Chicago on June 25th but you can contribute directly right now to OC 2020 using the link below.  It will take you to a page that you can fill out and you can donate at ANY LEVEL.  This effort could really make the difference in the next election for president.

Here is the link to let you give generously at whatever level works for you.

Thank you so so much!!