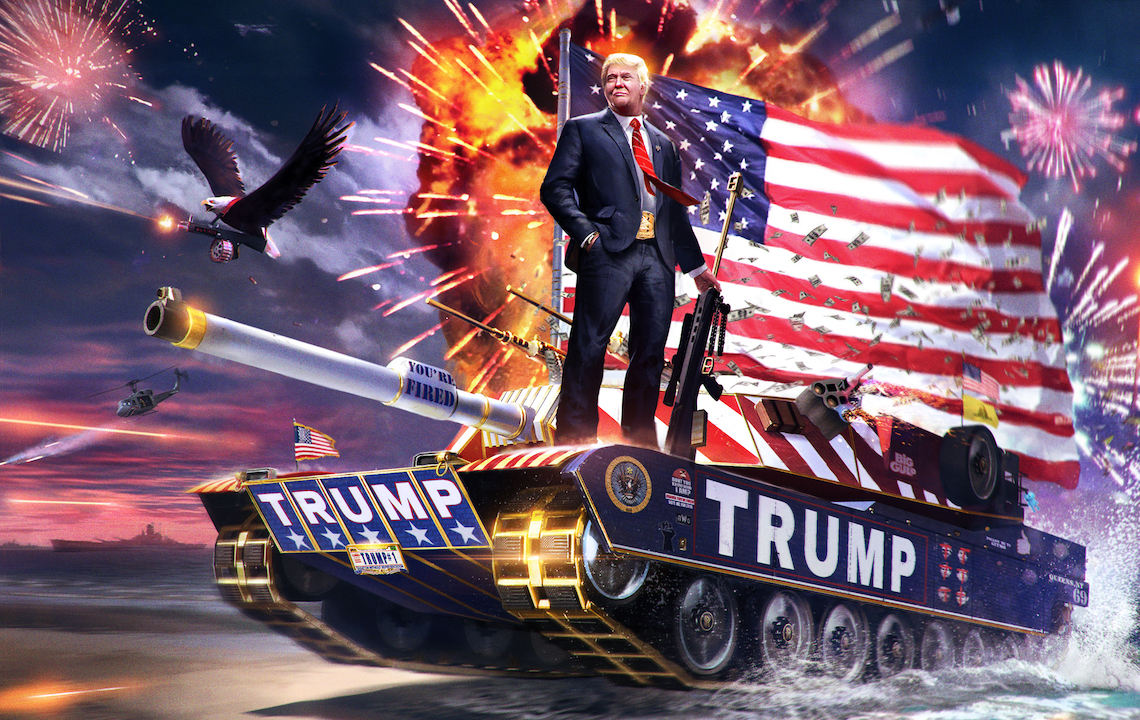 Why roll out the big tanks in Washington DC, and have the military marching around on display and jets flying overhead for the 4th of July?  Because Trump needs to feel better about his equipment.

Trump has yearned to have a military parade ever since he saw one in France standing next to Macron on Bastille Day.   France rolls out the military for Bastille Day to warn would-be kings that France is a free country that is not ruled by a king.  Trump, on the other hand, wants to use the military to tell the world that HE is King.  This Fourth of July Trump is declaring himself king of the United States.  Beyond the law.  No checks. No balances.  No one has the power or the balls to stop him.

If this Fourth of July feels like we are on the brink of turning into a dictatorship, that’s because we are.

Remember how we said we would never forget?  Remember the Holocaust?

There are children still being separated from their families at the border, men and women held in cages with standing room only, freezing conditions, no soap, no toothbrushes, held longer than they should be under the law, told to drink from the toilet if they are thirsty. Congressional lawmakers denied access to the holding pens who have to sneak out pictures of the human suffering they have witnessed so that the American people can learn what is going on.  There are journalists and human rights activists being harassed by OUR government- targeted by our government for being human rights defenders, put on travel restriction lists and deported if they try to travel outside of the United States. This is unbearable.  This is unacceptable.

What happened to the land of the free and the home of the brave?

Showdowns are coming.  A big one that just got teed up is the citizenship question on the Census.

The Supreme Court reviewed the evidence and determined that, NO, the citizenship question should not be on the Census form. They based their decision, in part, on evidence unearthed from the hard drive of a white supremacist whose mission in life had been to craft politically gerrymandered maps that would keep Republicans in control in their states despite ideological shifts in the majority of the electorate away from the GOP.  This is the way a party that represents the minority cheats to stay in power.

The Supreme Court learned about this evidence from the estranged daughter of  that white supremacist. This unearthed explosive information exposed the real motivation and purpose behind the citizenship question on the Census, namely, trying to keep white people in power. The Supreme Court realized that the government lawyers had misled them.  You don’t mislead the Supremes.  The Court ruled against the citizenship question on the Census. Game over.

The founding fathers understood the difference between “people” and “citizens”.  The Constitution commands that the Census count all the “people”, not all the “citizens” and for good reason. Federal funds are allocated based on head counts.  Communities with large groups of people who are not yet citizens will be deprived of federal funds based on this power move that Trump and the Republicans are trying to pull off. Adding the question could shift four congressional seats and affect billions of dollars in federal funding away from states like California and cities like Chicago with large Hispanic populations.

Trump is trying to overrule the Supreme Court by Tweet. If he succeeds, we will be entering true dictatorship territory.

There are some other important positive developments going on that may be canaries in the coal mine.