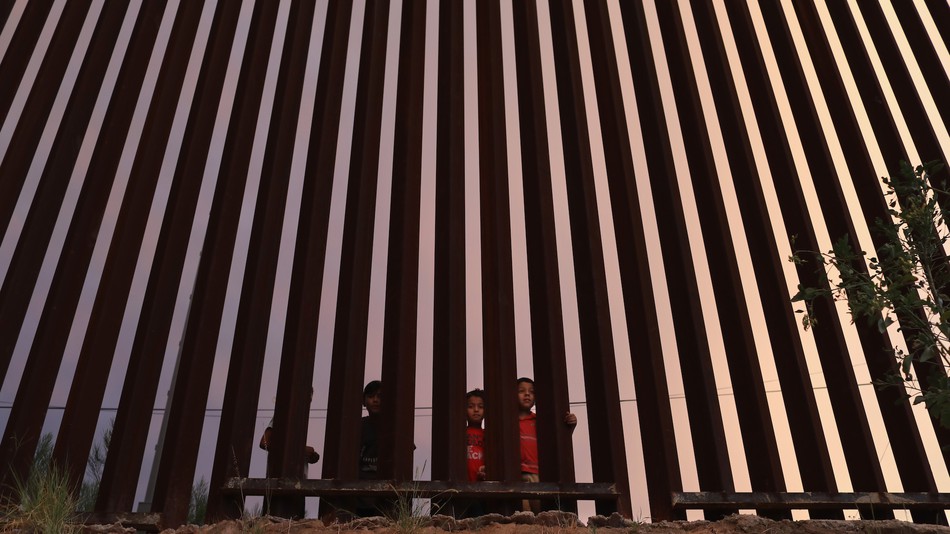 Happening at our border right now: traumatized children trying to comfort other terrified, emotionally distressed children who had been removed from the care of the grandmothers and aunts who had accompanied them and protected them on their trek to the U.S. border, mothers sobbing in the arms of the lawmakers asking them to help them to be reunited with their children, a little boy behind a barrier holding up a sign for the lawmakers to see begging for help. Ample supplies in storerooms, but children not getting those supplies such as toothbrushes, soap and blankets. Detainees told that if they are thirsty, they should drink from the toilet in their overcrowded cells.  Some holding pens standing room only.  Some holding pens people sleeping on the concrete floor without blankets.  Refugees not permitted to shower for days or weeks.

This was the scene Democratic lawmakers witnessed when they went to shelters housing immigrants in Texas and Florida to see first-hand what conditions were like there.  The conditions are subhuman.  They are probably even worse than what the lawmakers witnessed because the guards knew they were coming and had a chance to clean up their act.

In addition, the lawmakers were themselves were not supported by the guards at these facilities when they held a press conference against a background of shouting hecklers.  The lawmakers asked the guards to move the hecklers back from the area where they were speaking on camera. This was in Texas which has liberal gun laws.  The lawmakers were reasonably worried about the potential for an incident but the guards refused to help them out.  They are calloused.

A secret Facebook group consisting of over nine-thousand border patrol agents was exposed at around the same time.  These agents were posting racist and sexist comments which they shared and laughed about with each other.  Some of them even joked about children dying.

This moral decay is reminiscent of concentration camps in Germany.  To protect themselves from guilt, guards become numb to human suffering. They denigrate and mock the people they are torturing and those who try to help these victims.

Nora Phillips is one of the founders of Al Otro Lado, which, in English, means “to or on the other side”.  She has been a deeply committed human rights activist for 20 years, after becoming involved in immigrant’s rights in law school.  Nora describes what is happening at the Mexican border as an “apocalyptic hellscape.”

The Trump administration has created this nightmare by pressuring the Mexican government to force asylum seekers to stay in Mexico, waiting for their court hearings for entrance into our country using a “metering policy” (which they falsely deny using) that only permits a trickle of immigrants into this country.  Asylum seekers who are forced to stay in Tijuana, Mexico, are stuck in a town where the population has swelled beyond accommodation.  There is no room left in local shelters. Families are sleeping on the streets.  They are being preyed on by criminals.  Girls are being raped.  Shelters are being raided.  It is a scene of heartbreaking human desperation.

The trauma this administration has created and inflicts on refugees at the border is horrifying and not only terrorizes asylum seekers, but emotionally damages everyone involved in it.  Nora says, “I have been swimming in direct service trauma for twenty years.” But, she says, she has never seen anything this demoralizing or desperate before.

As a lawyer, Nora helps people assert their legal rights.  Al Otro Lado brings Nora into contact with clients who have lawful actions against the Trump administration that arise from violations of their rights as immigrants and asylum seekers.   Her activity as an attorney is lawful.  But she recently learned that our government has generated a secret blacklist to restrict human rights activists from travelling.  https://www.nbcsandiego.com/news/local/Source-Leaked-Documents-Show-the-US-Government-Tracking-Journalists-and-Advocates-Through-a-Secret-Database-506783231.html

Without her knowledge, Nora’s passport had been flagged by our government. She found this out when she and her young daughter took a trip outside the United States.  When they landed, they were detained in that foreign country for ten hours and then deported back to the United States.  Nora cannot leave the United States anymore even to go to Tijuana, Mexico, to meet with her clients, because of this travel restriction by our country which is circulated globally.  Her crime?  Helping immigrants assert their legal rights.

Amnesty International recently exposed this unlawful targeting of human rights defenders in its report: “Saving Lives is Not a Crime: Politically Motivated Legal Harassment Against Migrant Human Rights Defenders by the USA.”  Nora is mentioned in the report along with fifty other human rights defenders.

The Trump administration is again threatening to conduct raids using ICE to round up illegal immigrants in the United States.  This threat creates terror in largely Hispanic communities across the country.  Terror, once again, is the goal.

While this current immigration debacle did not start with the Trump administration, it has been  exacerbated by this administration.  For anyone who has empathy, as Nora does, it is emotionally damaging to be engaged in this human disaster but unable to help create a workable remedy.  “Trump is a natural disaster”, she says, “How much blood is on that man’s hands? How do we undo all the wrong that has been done?”

Think about it.  Americans love their pets and care deeply about sheltering dispossessed animals after a storm.  But when it comes to helping dispossessed people who are fleeing their countries and are victims of failed governments, what are we doing?

For those who believe the Bible should guide our behavior, the Bible is very clear about how we should  treat people who are refugees or foreigners.  Matthew 25:35 “For I was hungry, and you gave me something to eat, I was thirsty, and you gave me something to drink, I was a stranger and you invited me in.”  Deuteronomy 10:19 “And you are to love those who are foreigners, for you yourselves were foreigners in Egypt.” Exodus 23:9 “Do not oppress a foreigner: you yourselves know how it feels to be foreigners, because you were foreigners in Egypt.”

Brutality by our ICE and DHS agents at the Mexican border is not a by-product of a broken system.  Brutality is the goal.  Everyone who engages in the de-humanization of refugees is also being damaged and emotionally traumatized, including the border agents.  Human rights activists trying to navigate a system designed to inflict cruelty, as well as these refugee children and their families who are directly impacted; all are being damaged and emotionally traumatized by this administration’s unnecessary and intentional cruelty.  This has to stop.  We have to do better.

Will Trump Ever Pay for His Attempted Coup?