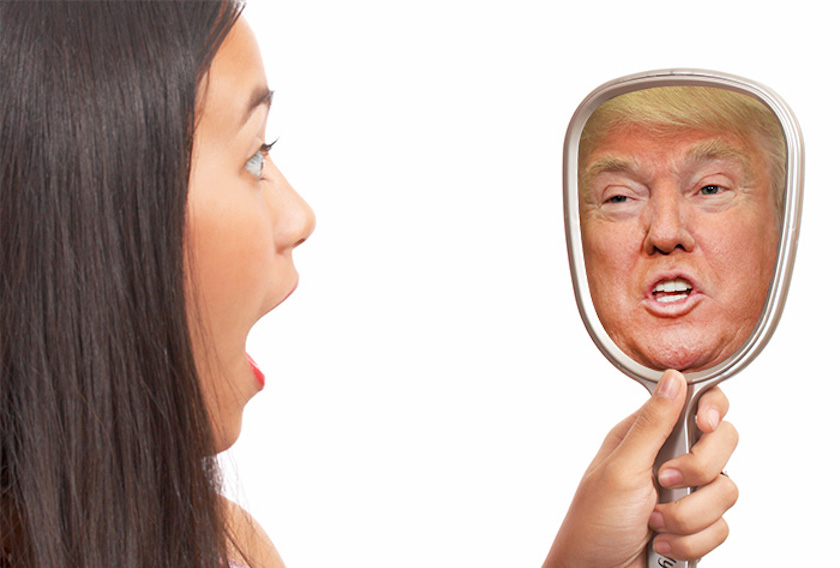 Trump is enjoying his highest approval rating since he was elected.  Some polls have him at a 47% approval rating.  And Trump is totally in control of the GOP.  After his Nuremberg rally on Wednesday night in which he attacked Rep Omar and got his crowd yelling “send her back” instead of “lock her up” his approvals rose by 5% with his base.  Although a majority (around 60%) of Americans polled said that Trump’s approach is racist and they did not like it.

When it comes to the puzzle of why Trump’s core voters love him to death, we know there are certain groups he aims to please.  He is THEIR president but not the president for all Americans.  There are Evangelicals who cling to him to get the right-wing justices they have dreamed about so they can abolish abortion, which really translates into controlling women who think they should have control over their own bodies.  There are rich guys who know Trump will protect their financial interests.  There are racist Americans who like his hate speech.  There are others who must be getting perks from Trump in some way in this corrupt administration.

But then there is the mystery of all those blue collar low education men and women who are not particularly racist and not benefiting economically and yet they love him so much that they are willing to overlook his many serious deficits.  Why do they still love him even though his policies do not make their lives better? Many of these people are the same guys who are being hurt by Trump’s trade wars and his tax cut for the 1%.  American families are, on average, shelling out about $4,000 more in taxes annually while some of the largest corporations are paying no taxes at all.  Some Americans are beginning to get it that climate change is a real thing.  Yet Trump keeps denying it despite farms in the heartland that are too sodden to yield crops and “once in a lifetime” rainfalls and cresting rivers that are becoming commonplace and historic heat waves with temperatures as high as 112 anticipated this weekend in this country.  So how is Trump making their lives better when Trump’s policies are making their lives worse?

Because, in a strange way, Trump DOES make their lives better.  He makes their fantasy lives better.  The blue collar regular guy can imagine himself as Trump.  He gets to walk a mile in Trump’s shoes in his fantasy life if not in real life.  These people can enjoy his authoritarian posturing and power.  They too would like to be able to say “You’re fired!” to everything they don’t like in life.  Trump lives out their dream as he did on The Apprentice.  They love it as he shouts above the roar of Air Force One- another power image.  They don’t fault him for womanizing.  That’s what they would do too if they were rich and powerful.  They don’t fault him for being cruel to immigrants.  Trump has convinced many of them that the foreigner is dangerous to them.  They feel just as aggrieved as he says he is – white men and women being told to behave by the #MeToo movement and the PC police while their power is eroded.  No way! They are fine with him breaking rules, abusing power and profiting off of his businesses as president.  They would do the same.  This is why the travesties of Trump do not turn off his core voters.  Far from it.  The truth is that Trump’s abuse of power turns them on.

In addition, Trump is using a racist rallying cry to rile up his base even more.  It is shameful and shocking to watch these mostly white people at his rally in North Carolina sitting behind him smiling and laughing while chanting horrible things as if they are watching a game show or rooting for their team at a football game.  Because this is deadly serious.  If something happens to Ilhan Omar or another lawmaker of color he is verbally assaulting, Trump will be to blame.

Any Democrat who still thinks that Trump’s core voter bloc can be persuaded to fall out of love with Trump needs to stop deluding themselves.  Trump’s base will never leave him.  They are totally lost souls.  The focus of the Dems must be to get out the vote in larger numbers than ever before for the 2020 election.  The majority of Americans still do not like Trump or what he stands for.  They never will.  Disapproval of Trump continues at around 55%.  But these people better vote in the 2020 election and not only for president but also to change the leadership of the Senate if they hope to get a working Congress that will in fact make their lives better.

Mitch McConnell has dubbed himself the grim reaper because every single good piece of legislation that would help the American people that has been carefully crafted by the House, goes to the Senate to die.  All the Senate is doing these days is approving more and more right wing judges.  That is all.  Mitch is delighted with himself for that.  McConnell is like the gunk that has built up in your plumbing system that won’t let the water through.  We need Drano.  Everything most Americans want such as recreating a viable middle class and having a country where the ideal is that people are treated fairly and equally, all of this and much more will die unless Mitch is flushed out of our system either by being voted out of office or by voting in a Dem majority in the Senate.

And speaking of death, the Trump administration is continuing its efforts to kill the Affordable Care Act.  They might finally succeed now that a three judge panel in the 5th Circuit appears to be in favor of striking down the entire act as unconstitutional.  Unable to kill it off in Congress, a group of Attorneys General may now have a Hail Mary pass to get the Supreme Court to take another look at the ACA on grounds of constitutionality.

Tell me.  How is that helping the blue collar working guy who loves Trump?  Not at all.  In fact, it could mean the literal death of the very Trump voter who loves Trump to death.