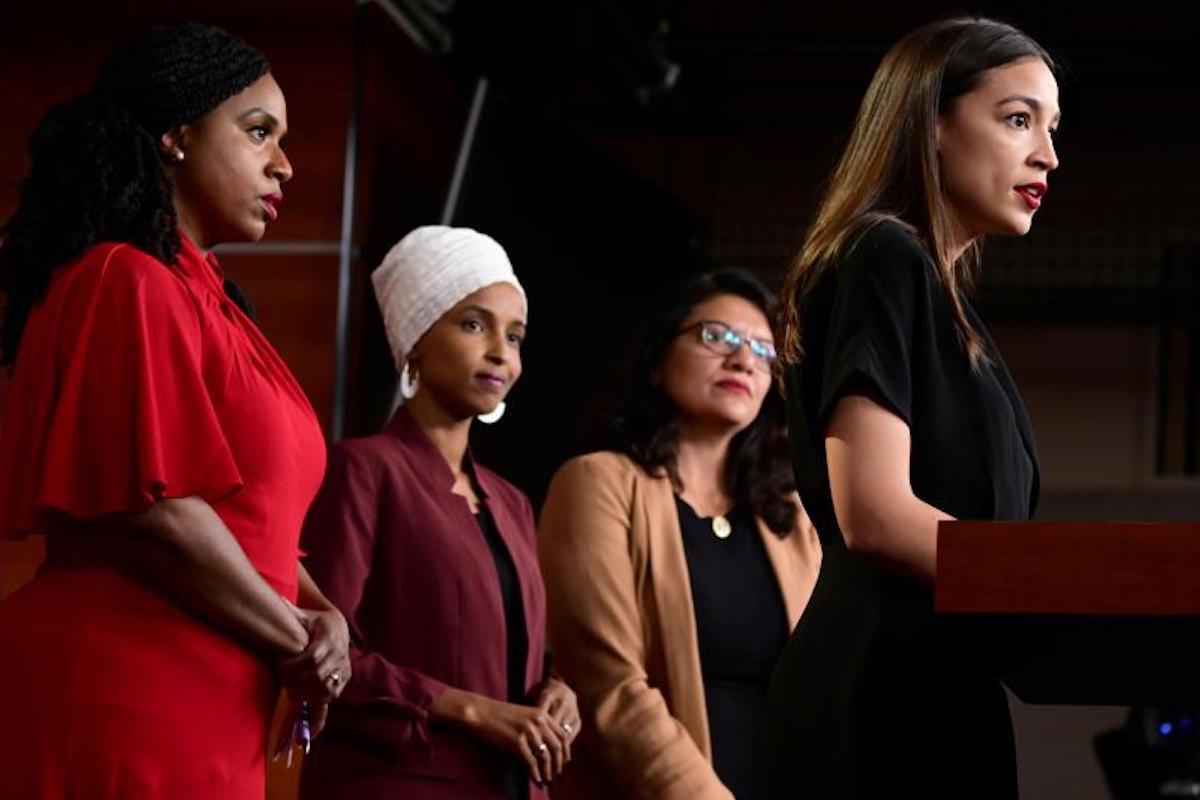 We already knew that he is sadistic, impulsive, a bully, un-coachable, un-educable, paranoid, xenophobic, mysogynist, and self-centered in a way that shocks the conscience of any normal human being who wasn’t raised by wolves.  As the leader of our country he is not only imposing his many illiberal, paranoid, and undemocratic policies on all aspects of American life, he is affecting our discourse in a deeply disturbing way.

And now we know for a fact that he is…wait for it….. RACIST! It took five years for the media to see him for what he has always been. The uncertainty is over.

Trump has taken issue with four women of color, lawmakers, who have been critical of him: Alexandria Ocasio-Cortez, Ilhan Omar, Ayanna Pressley, and Rashida Tlaib.  For three days in a row Trump has railed against these four lawmakers. He is calling for them to “go back” to their countries of origin.  These women are all Americans.  All but Ilhan Omar were born in this country.  Trump has called for these representatives to “go back” to the “crime infested places where they came from”.  This is a nativist trope. This is hate speech.  This is dangerous and if something happens to any one of these women, Trump will be responsible.  As Kamala Harris just said today, Trump is a racist and HE needs to go back to where HE came from!  (I like this woman!! You go, girl!)

The GOP has been next to silent.  And some have supported him, including Lindsay Graham.  If they cannot come out now against Trump’s racism, we know the entire GOP is going down the toilet with Trump.

When a president can talk this way about political foes because he does not like the color of their skin and tries to pretend it is their ideas he dislikes, he is putting the power of the presidency behind  bigotry and racism.  Trump may say he is playing to conservatives who are tired of people who don’t appreciate our country.  But the way he is going about this assault has cleared up any doubt.  We now know that Trump plans to win on hate and divisiveness.  Trump’s playbook is divide and conquer.  Divide the American people into US and THEM and win re-election by eaking out a win with angry, fearful white guys along the same path to victory that worked for him in 2016 -the key swing states of Wisconsin, Michigan, Pennsylvania, Arizona, Georgia, North Carolina and Florida- all important in this equation of his to win by whipping up hate across America.

Trump won by narrow margins in many of these swing states by telling people he would help them have better lives.  Economic anxiety and dislike of Hillary were some of the key ingredients that helped him win.  But Hillary is not running and the electorate in these states have had two and a half years to judge the success of his policies.  If the heartland voter votes based on Trump’s policies then Trump loses.  But if he can rile up hate and get people to vote based on fear of the rising multicultural tide, he thinks he can narrowly win.  That is his calculation.  If Trump is right, if hate and fear win out over a willingness to work together for a better country, we could get Trump for another six and a half years.  I don’t see how our democracy survives that.

We are on a perilous path towards the demise of our democracy unless the electorate can rise up against Trump and Trumpism in the next election.  The election of 2020 will determine the future of our country.

For those of us who are anti-Trump, the question we face is whether we can work together.

Before Trump attacked the “Squad,” Pelosi and these same four lawmakers were wrestling with each other over the difficulty of how far left our country should go.  Pelosi is the mother hen trying to be sure that lawmakers like Lauren Underwood, who was elected in Illinois in the 2018 midterm in a district Trump easily won in 2016, STAYS in the House.  She understands that to accomplish that the Dems cannot go too far to the left even though they need to have a vision of a future that moves the country in a progressive direction.  There are many districts like Lauren Underwood’s where Trump trounced the Dems in 2016 that Pelosi is trying to be sure will stay in the Democratic fold for 2020.  To keep enough voters in these states on Team Dem, the Dem party MUST appeal to centrists and moderates.

It is painful to realize that many of the so called left of center ideas like free college and medicare for all are the very ideas that the blue collar guys should be rooting for but will reject as “socialist” because Trump and the GOP are so successful at getting these folks to vote against their own interests by using social warfare tactics,  Those on the left- the Bernie bros and the radical left are impatient for change.  That is totally understandable.  And they are right when they say their progressive ideas will be good for the blue collar guy.  But first we gotta win the presidency.  That is order of business number one.  We have to stand together against Trump first before we can successfully move further left.  Once the Democratic party is in power, the country will be able to navigate further to the left from that position of power.  But if Trump wins again all bets are off.  If he wins we will be fighting to survive as a democracy instead of moving forward.

Trump has done the Dems a favor by coming out of the closet as the racist he is and has always been.  He has united the Dems against him.  The House issued a rebuke of the president after Pelosi condemned Trump’s choice of words and the GOP initiated a floor fight in which all of the Dems rallied around Pelosi.   The House “strongly condemns President Donald Trump’s racist comments that have legitimized and increased fear and hatred of new Americans and people of color by saying that our fellow Americans who are immigrants, and those who may look to the President like immigrants, should ‘go back’ to other countries, by referring to immigrants and asylum seekers as ‘invaders,’ and by saying that Members of Congress who are immigrants (or those of our colleagues who are wrongly assumed to be immigrants) do not belong in Congress or in the United States of America.”  Thanks to Trump, the Dems are unified.  At least for now.

When tribalism and anxiety rule as they do today, the danger is that those of us who need to pull together to rise up can end up squabbling with each other.  We can end up attacking each other and fighting each other when we need to band together if we want to win the big and incredibly important battle that is coming.  It is up to us to keep our eye on the ball, follow the North Star we need to follow to rid our country of Trump and Trumpism.  By “us” I am talking especially about women-suburban, black and minority women, above all, who want to be sure our country continues as a democracy we can be proud of, not ashamed of.  When there is a five alarm fire in your house, you better put out the damn fire before you talk about remodeling the kitchen.

I am planning to watch the polls to see who has the best chance to beat Trump.  I care about policies but I will not vote in the primary based on policies.  I am going to assume that the Dems will figure out good policies compared to the alternative.  I will vote for the Democrat most likely to beat Trump and I hope you will too.  I am also supporting Organizing Corps 2020 which I have written about as a way to engage the voters in the all important swing states.  I am supporting American Bridge PAC in their effort to get disillusioned former Trump voters in key swing states to tell their stories on film and then share those stories on social media, with “influencers” and local news.