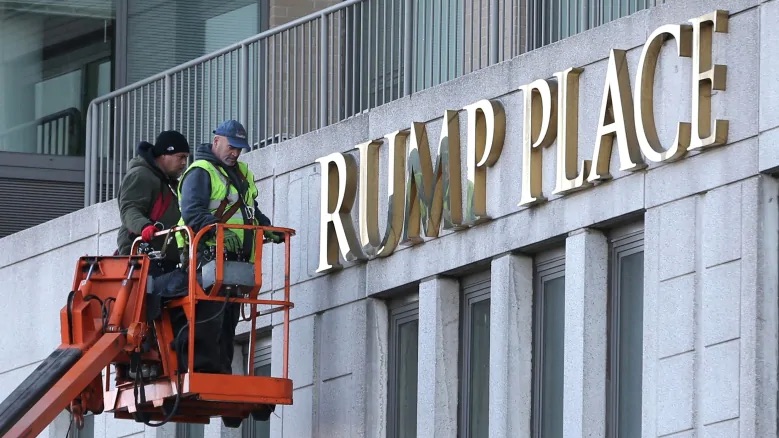 The Dow plunged 800 points on August 14th, 2019, after the bond market flashed a key warning signal, the inverted yield curve, that usually heralds a coming recession.  Why did the stock market fall?  Trump had just said he was going to go easy on the Chinese tariffs! Trump said he wanted Americans to have a merry Christmas!  Easing the trade war with China would help the tech companies that sell a lot of their products to Americans at Christmas.  By making that statement, by-the-way, Trump was admitting that the trade war hurts the American consumer although he had been claiming the Chinese were paying the tariffs and getting clobbered, not us.  We were supposedly getting rich from all those tariffs paid by the Chinese.  As with all the other 12,019 false and misleading statements Trump has uttered in his 928 days in office, this was a lie.

Why did he decide to soften on the trade war with China?  Insiders say the White House is panic stricken about the stock market falling since a strong economy is his best argument for re-election.  Maybe he finally listened to a panicked economic advisor or two who got it through his thick skull that tariffs hurt American consumers.  Who knows.

But the market still plunged.

Just because Trump might have seen a little bit of light about what drives global and American economic health does not mean he will change his approach.  He is too stubborn.  He believes in tariffs as a solution to trade imbalance and is obtuse about how they work.  But people around the world are finally getting wise to him.

People everywhere understand Trump now.  He blows up whatever agreement already exists, creating chaos and uncertainty, then he tries to strong arm a deal by threatening the other side and then he changes his mind over and over again attacking and then retreating and then attacking and then retreating and the thing he busted up rarely gets fixed.  He’s an Infant Terrible, who leaves a roomful of broken toys in his wake.  What he does best is create chaos and uncertainty.  He has done this over and over again: the TPP, the Iran Accord, North Korea, NATO.  I could go on.  Economies like Germany and China across the globe are slowing down in part because of uncertainty generated in large part by Trump’s trade war.  Uncertainty is not good for business.  It is hard for businesses to predict when there is a lot of uncertainty in the marketplace.  Businesses curl up into a protective ball and try to wait it out.   Trump is not the only reason for global slow down and uncertainty, as I understand it, but he is definitely contributing to the problem.

“The economy was clearly slowing ahead of the tariffs,” said Lindsey Piegza, chief economist at the investment bank Stifel. “We saw that weakness setting in prior to the tariffs, but the global trade war has only exacerbated that weakness.”

Since his election Trump has been juicing the stock market with sweet little lies and a tax cut for the rich.  He was all in on the tax cut for the 1% and corporations, for example, because that juiced the stock market. But that did not last forever.  He and the GOP claimed the tax breaks would pay for themselves.  Not so.  That sugar high is over now and what it did was not what was predicted by Trump and the Republicans.  It did not trickle down to average Americans.  We are seeing a reasonably good job market that is weakening, with salaries that are too low and jobs that are not secure jobs.  People have to work more than one gig to stay afloat.

As Trump plays hardball with China and then plays softball and then plays hardball, China plays the long game to Trump’s short game.  China can wait this out.  Trump cannot if he hopes to be re-elected.  He needs to produce a good trade deal with China.  But China has no incentive to bend to Trump’s will and tariffs have not done the trick to force their hand.  As the trade war continues, markets will be negatively affected.  A global slow down and recession looks to be imminent.

Analysts say Trump’s decision to delay some tariffs may have been too little too late — and that he risks losing his most powerful argument for reelection: the economy.

I love this country.  My North Star is that we get rid of this toxic presidency and this administration full of people who are afraid to tell the truth to Trump if he doesn’t agree. And it is time for Mitch McConnell to go.  He has earned his name, Moscow Mitch, and “the Grim Reaper,” for protecting Russian interests and refusing to pass legislation that would help Americans.  Bills that the Democrats have labored over, that would help this country, like gun control, health care reform, and election protection, all those House bills go to the Senate to die thanks to McConnell who refuses to bring them to the floor for a vote.  Americans think Congress doesn’t work.  But what is gumming up the works is Mitch McConnell.  Congress would work a lot better without him standing in the way.

I love this country so much that I hope we have a terrible recession. I hate saying that.  I look forward to a really horrible recession.  Because more than anything else- more than the backlash on his immigration policies and backlash from deregulation, the backlash from removing endangered species protections, his tweeting, his assaults on the press and on democracy, his illegal activities, and abuse of the emoluments clause and abuse of power and so much more…

What will cause Trump to lose is a recession.